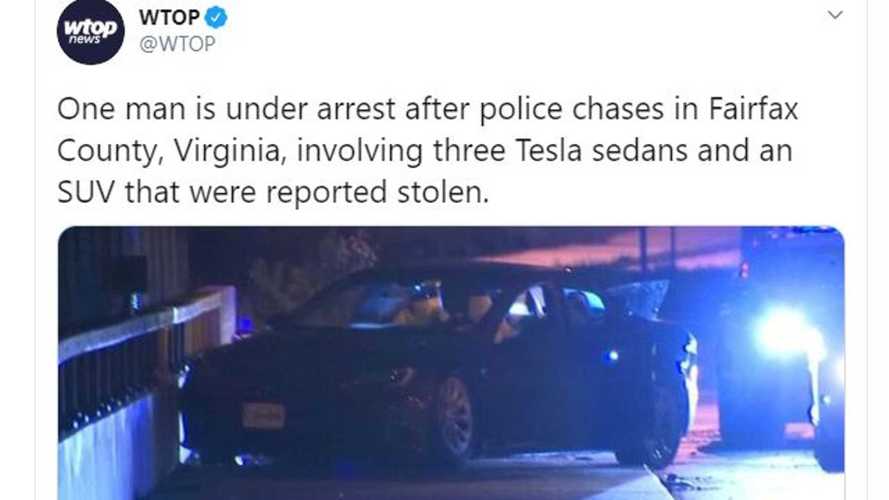 Apparently, the three cars were likely stolen from a Tesla store.

According to a recent report by NBC 4 Washington, three Tesla vehicles were likely stolen from a Tesla store in Tyson's Corner, Virginia in the middle of the night on Friday. The drivers fled and were then chased by the police. Reportedly, one driver was caught, but two were able to get away. As of the time of writing, two of the Tesla thieves are still at-large.

Fairfax Country police reported about the incident. They say the three Tesla vehicles were spotted in Virginia on "Route 7 near the Beltway." It was about 3 AM, and the officers noticed the cars had dealer tags. When they tried to pull one of the Teslas over, the driver took off and started a pursuit.

Gone In 30 Seconds: Watch A Tesla Model S Get Stolen In Seconds
⠀

During the chase, one of the Tesla thieves crashed the car and ran away. The report says the crash happened on Leesburg Pike near the Beltway. Meanwhile, the other two drivers kept on for a time, but eventually abandoned the Teslas near Route 236 and took off on foot.

In the end, the police were able to catch one of the car thieves. However, the other two got away. The suspect in custody is from Maryland. He lied to the police about his age, trying to claim he was a juvenile. The police also noted that they aren't positive about how many people were in at least two of the cars.

This is an ongoing investigation and a developing story. If you have any information, contact the Fairfax Country police. We'll update this article if and when more information becomes available.