Germany: In March 2020 Plug-In Electric Cars Sold Like Never Before

Almost 1 in 10 new passenger cars sold in March in Germany was a plug-in.

March 2020 was an exceptional month in Germany, as the coronavirus lockdown significantly affected the automotive market (new passenger car registrations collapsed by 37.7% year-over-year), while the plug-in segment noted record sales (despite the lockdown).

The number of new passenger plug-in car registrations amounted to an all-time record (for the third straight time) of 19,755 (up 104% year-over-year) and record market share of 9.18%! That's about 1 plug-in for every 11 new registrations.

The plug-in segment is experiencing unprecedented growth in both categories:

One of the biggest factors behind the EV sales surge in Germany are more generous subsidies (since February 2020, "retroactively applicable to all vehicles registered after November 4, 2019").

Also, some used cars can get the same subsidies, if: are under 1 year old, under 15,000 km and didn't get a comparable subsidy in the country of the first registration.

The detailed official report for the German market is delayed so this time we will limit our coverage to just a few highlights.

The top-selling electric car in March was Tesla Model 3, with 2,034 new registrations. Thanks to volume deliveries in the last month of the first quarter, Model 3 is now 3rd for the year.

Volkswagen e-Golf was the second best selling model in March (1,524) and because Renault ZOE noted "only" 945 registrations, e-Golf is now the market leader for the year.

One of the important things is a new record of Audi e-tron registrations (721). The all-new Porsche Taycan noted 164 registrations. 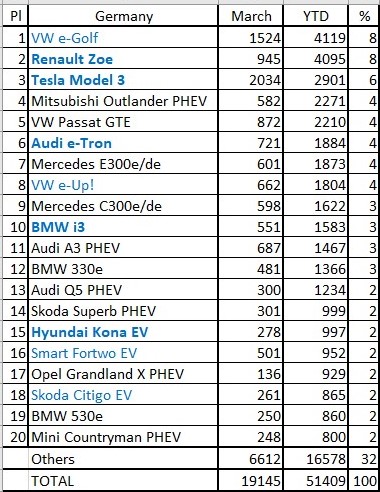