Tesla Model 3 outsold the second-best model about 2:1 and took 13% of the entire plug-in car market.

The volume of plug-in electric car sales in China rebounded significantly from a very weak February and reached almost 60,000 in March.

That's still 51% less than in March 2019, although taking into consideration the situation after the lockdown and higher incentives in 2019, it's really promising. It's expected that sales will gradually improve over the next several months to match levels from 2018/2019.

According to EV Sales Blog, the plug-in market share stands at 5.7% in March and all-electric cars consist of almost 85%.

So far this year, the Tesla Model 3 was the top-selling model each month and in March reached its best-ever result of 11,280 (16,747 YTD). That's the only five-digit result not only for the month but also for the quarter. 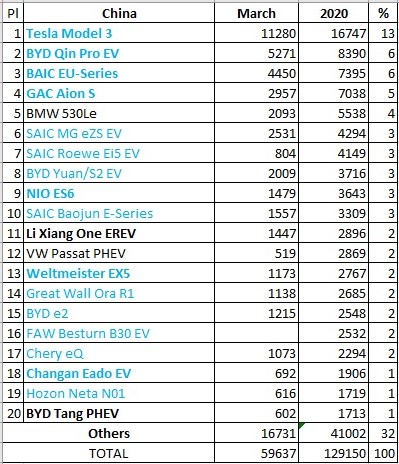