Could you imagine the Audi e-tron would stand out at anything?

People that live in colder countries could be the last ones to adopt EVs, but Norway shows this is not the case. Although electric vehicles lose precious range in low temperatures, some suffer less from that than others. This is what the Norwegian Automobile Federation – also known simply as NAF – decided to test with 20 EVs. That was probably the biggest winter EV range test we have ever seen.

The tests started in Oslo and ended in Hafjell, which is normally a 200 km (124 mi) journey, but the evaluation extended that route to 482 km (300 mi) to cope with the cars with more range. They went through city and highway driving and at least a mountain pass. Speeds ranged from 60 km/h (37 mph) to 110 km/h (68 mph). The idea was to run the EVs until the battery was completely discharged. 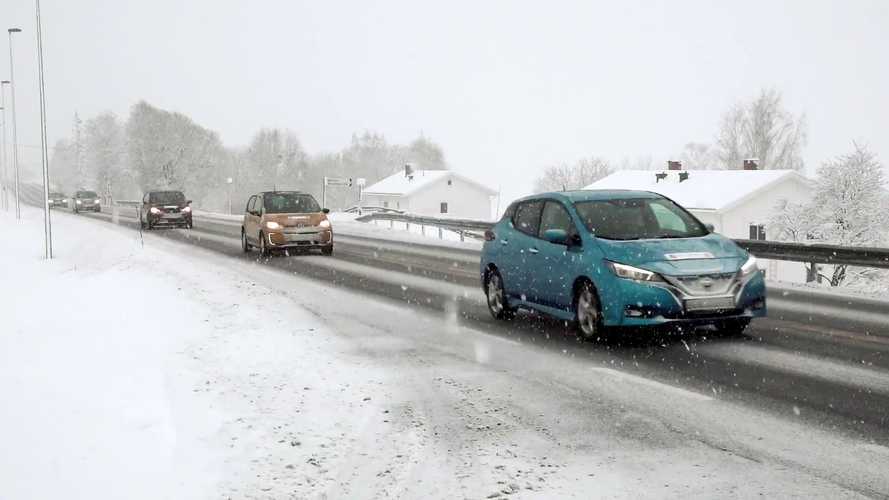 NAF also performed a charging test from around 10 percent to a minimum of 80 percent of charge. It was conducted at -2ºC (28.4ºF), and all cars were driving for at least two hours to ensure their batteries were warm.

The first thing the association discovered was that the tested EVs present around 18.5 percent less range than their manufacturers state on WLTP. The worst one was in this was the Opel Ampera-e, a car that you are more used to calling Chevy Bolt. With a WLTP range of 423 km, it managed to run only 296.9 km, or 29.81 percent less.

The vehicle that was most faithful to its stated WLTP range was the Hyundai Kona. Of the declared 449 km of range, it was able to run 404.5 km, or only 9.91 percent less than officially claimed.

Surprisingly, the EV people tend to criticize the most was the charging champion. The Audi e-tron 55 quattro took only 27 minutes to go from 10 percent to 80 percent of charge. Would that be a reason for it to have been the best selling EV in Norway in January and February?

Again, the worst EV in this aspect was the Ampera-e. The difference is that it now had the company of the Nissan Leaf Plus and the Renault ZOE. The French EV proved it cannot handle more than 45 kW. Without a liquid-cooled battery management system, it increasingly lost capacity with time.

The test helped NAF debunk common beliefs, such as that EVs suddenly stop when battery juice ends. They keep speed levels until the very last kilometers – or miles, whatever. What happens is that the car gives signs that it will stop, such as a loss of acceleration capacity, a limit on top speed, and even a stop in heating. Nils Sødal, the senior communications advisor for NAF, tells us something intriguing.

“A fun fact worth knowing is that, if you run completely out of power, you can still drive a few more kilometers. Just shut the car down and leave it for a short while, maybe half an hour to an hour, and you’ll have power enough to drive even a few more kilometers. This is extremely practical if you happen to stop just a few hundred meters short of a charging station or your home.”

Apart from this unexpected news, Sødal asks automakers to be more transparent with information about the range of their cars. He says customers get really disappointed to discover the range is so affected by low temperatures, as well as charging. That is certainly not an issue for people that are used to EVs, but what about new adopters? Managing expectations can be crucial to increase EV sales.

Electric vehicles are becoming increasingly more popular. Range is still an important factor when
choosing an EV, but advertised range is not necessarily what you experience in real life.

The Norwegian Automobile Federation (NAF) has tested the range and charge time of popular
electric vehicles in winter conditions. 20 vehicles were driven until they stopped completely and shut down, to measure their real world range.

- The fact that EVs suffer loss of range in colder temperatures is not new. But now we know just how much colder climate and snow affects range, consumption and charge time, says Nils Sødal, senior communications advisor for Norwegian Automobile Federation.

No car manages their own WLTP range NAF collected 20 of the best-selling electric car models you can buy from Norwegian dealerships as of January 2020.

The test focused on range, consumption and rapid charge time. To test all the cars equally, the test drive was performed without preheating of neither cabin nor battery. All cars drove the same route on the same day, with similar style of driving, and climate control settings.

The EVs lost in average 18.5 percent of their range compared to their WLTP range.
Hyundai KONA came closest to its own stated WLTP range, with a deviation of only 9 percent
compared to WLTP. KONA is the car with the longest actual range in the lowest price bracket and it has a decent charging speed.

Opel Ampera-e only managed 70 percent of the stated range (WLTP). The car still has a good range that meets most needs. But the combination of a high price and a battery pack that only charges with a maximum of 50 kW, makes Ampera-e appear outdated in today's electric car market.

The Tesla Model S LR has the longest WLTP range on the market. In the real life range test the Model S went the furthest, but the Tesla veteran has the second-largest deviation compared to the WLTP range in the test and manages only 74 percent of the stated range.

Worth noting is that the Model S, at the end of the test, drove in more challenging driving conditions than the other models. The last miles were driven in relatively deep, new snow which increase the consumption severely.

Contrary to popular beliefs, EVs don’t just suddenly shut down when they run out of battery.
The test shows that all the EVs give plenty of warnings before they run out of power, and you
maintain driving comfort and speed even after the first warning.

-The test shows that most EVs maintain speed until the last few kilometers. Then the drivers all
experienced a loss of acceleration and a limit on maximum speed. In some cars the heating
automatically shut down.

-A fun fact worth knowing is that if you run completely out of power you can still drive a few more kilometers. Just shut the car down and leave it for a short while, maybe half an hour to an hour, and you’ll have power enough to drive even a few more kilometers. This is extremely practical if you happen to stop just a few hundred meters short of a charging station or your home, explains Sødal.

The test team also measured how the cars performs during rapid charge, focusing on effect and
time.

Rapid or fast charging with roadside chargers of an electric car is not necessarily straight forward.

Charging speed, meaning how many kilowatts the battery can handle, depends on many factors such as state of charge, battery temperature and outside temperature.

-Our test concludes that even if you do everything right, it can still be difficult to get the battery
warm before charging in winter time and therefore charge slower than advertised, says Sødal and continues:

-Worth noting is also the lack of standardization when it comes to advertising charge time. Some
advertise the effect (kilowatts) the car can charge with, others measure the time spent on the fast charge station and some refer to kilometer charged in either 30 minutes or 60 minutes.

The Audi e-Tron 55 quattro has the fastest charging speed on the market. It charged til 80 % in just 27 minutes and holds the charging curve at a very high level throughout the test.

In the opposite end we find Opel Ampera-e and Renault Zoe. Both cars have large battery packs but only support 50 kW charging. In fact Renault Zoe only manages 40 kW, and barely that. This means that fully charging the battery on a rapid charge station becomes a time consuming affair.

-Even though the WLTP-range is closer to real life range than its predecessor, NEDC, it is still not
accurate. Too many consumers are disappointed in their cars real life range and have not been
aware of how much external factors reduce both range and charge time, says Sødal.

-Buyers need to be made aware of the difference between WLTP range and real life range with more than just a foot note, especially if they live in countries with colder climate, concludes Sødal.

How the test was performed

To test all the cars equally, the test drive was performed without preheating of neither cabin nor
battery. All cars drove the same route on the same day, with similar style of driving, and climate
control settings.

The test stared in Oslo, in 3 degrees, sleet and rain and ended in Hafjell in -6 degrees and heavy
snow. The test route consisted of city driving, highways and country roads in speeds from 60 kmh to 110 kmh. All the cars had one climb through a mountain pass. The longest running cars climbed two mountain passes.

The charge test was done in -2 degrees. All cars were driven on the highway for a minimum of two hours, to ensure that the battery was warm. The cars were driven straight to the charging station, without standing in line waiting. All the cars charged from less than 10 percent to minimum 80 percent.