Opel Ampera-e (the European version of the Chevrolet Bolt EV) is still #1.

After a short break in January, the Dutch plug-in electric car market returned to the path of growth in February.

The total number of new passenger plug-in car registrations in the Netherlands increased 51% year-over-year to 3,685, while the market share was 12%.

More than two-thirds of all new plug-ins were all-electric, although plug-in hybrids are growing much faster - 139% year-over-year, compared to 36% in the case of BEVs.

There are several surprises on the top 20 list - starting with the Opel Ampera-e (the European version of the Chevrolet Bolt EV) in #1 for the month (647 registrations) and for the year (959 registrations) for two consecutive months. The electric Opel from the GM era is selling great because the company discounted the retiring model.

A similar thing concerns the Volkswagen e-Golf (485 and 789 YTD), which sells great - like there would be no tomorrow (or rather Volkswagen ID.3) just around the corner.

The thing that looks odd is the #7 position of the Tesla Model 3 and #12 position of the Renault ZOE, the two best-selling electric cars in Europe, but it might change rapidly in March or later this year. 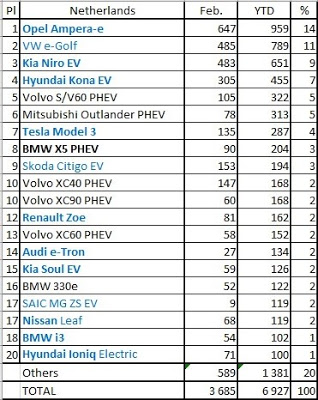