It will start in the US and probably reach all other markets in 2020.

It took Tesla 1 year, 11 months, and 7 days, but the company is finally allowing owners with MCUv1 infotainment systems to have the MCUv2 unit. Elon Musk promised that back on March 27, 2018. Despite an online petition with more than 7,000 people, the Tesla CEO still tried to dismiss it, but we are happy to inform Tesla will let its clients decide if it is a good deal or not. Unless they are short of $2,500, this is a no-brainer decision. 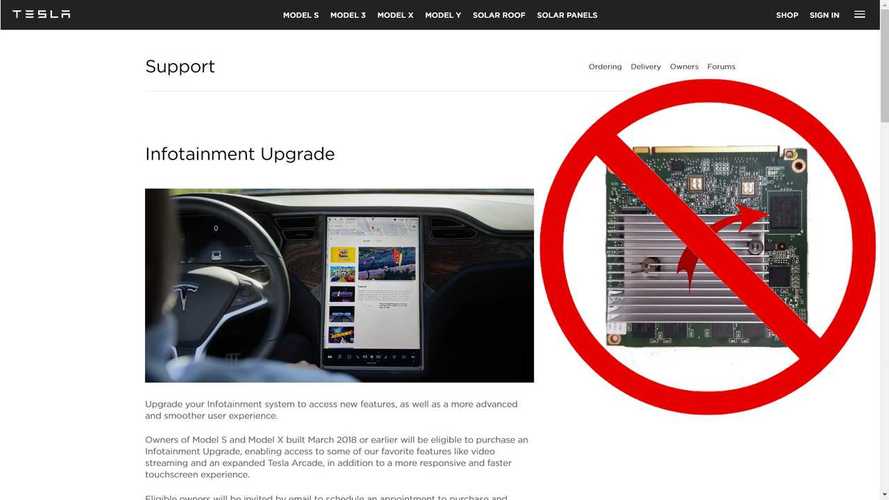 The MCUv1 has a chronic defect caused by excessive logging. That leads the eMMC flash memory chip to fail in a matter of four to five years. The only official solution offered so far was replacing the MCUv1 for another $4,000 MCUv1 that would present the same issue again. Due to OTA updates and more substantial software, that would happen even faster.

Tesla MCUv2 Upgrade Is Almost Plug And Play: The Trick Is Programming

With the Infotainment Upgrade, Tesla will solve this problem for good. Owners of the first vehicles will also have "access to some of our favorite features like video streaming and an expanded Tesla Arcade, in addition to a more responsive and faster touchscreen experience." That is what the company's page for the upgrade officially says.

The upgrade will eliminate "access to AM, FM or Sirius XM radio," but Mr. Green says Tesla can restore that if customers ask for it. If the upgrade's only disadvantage is this, what has kept Tesla from offering it right after Musk said it could be done? Was it a supply issue? Did the company need more time to make the upgrade as smooth as Mr. Green said it was? We'll probably never have an answer for that.

Regardless, Nicolaj Frederiksen and 7,030 more people are pretty happy. He was the man that started the online petition we mentioned before. When we first wrote about it on October 27, 2019, it had almost 4,000 petitioners. Considering how many Model S and Model X owners are there, the way it grew shows how pressing the issue was.

"I'm very excited about this news from Tesla. Having more than 7,000 signatures from people who want the retrofit made available really shows that Tesla did the right thing offering this. Listening to the customer's demands is not industry standards in my experience. This upgrade will allow many of the early Tesla owners to upgrade their cars into a whole new level, and also secure their cars from failing eMMC chips in the future."

Frederiksen is aware that the upgrade is initially only to US customers, but he expects that to be offered in more countries very soon.

"I expect this to be available to all markets in the near future, hopefully sometime in 2020. The biggest concern now is the EU regulation regarding DAB+ radios in all cars by 2021 would interfere with the upgrade because of lack of radio tuner, but I'm unsure if this will have an impact."