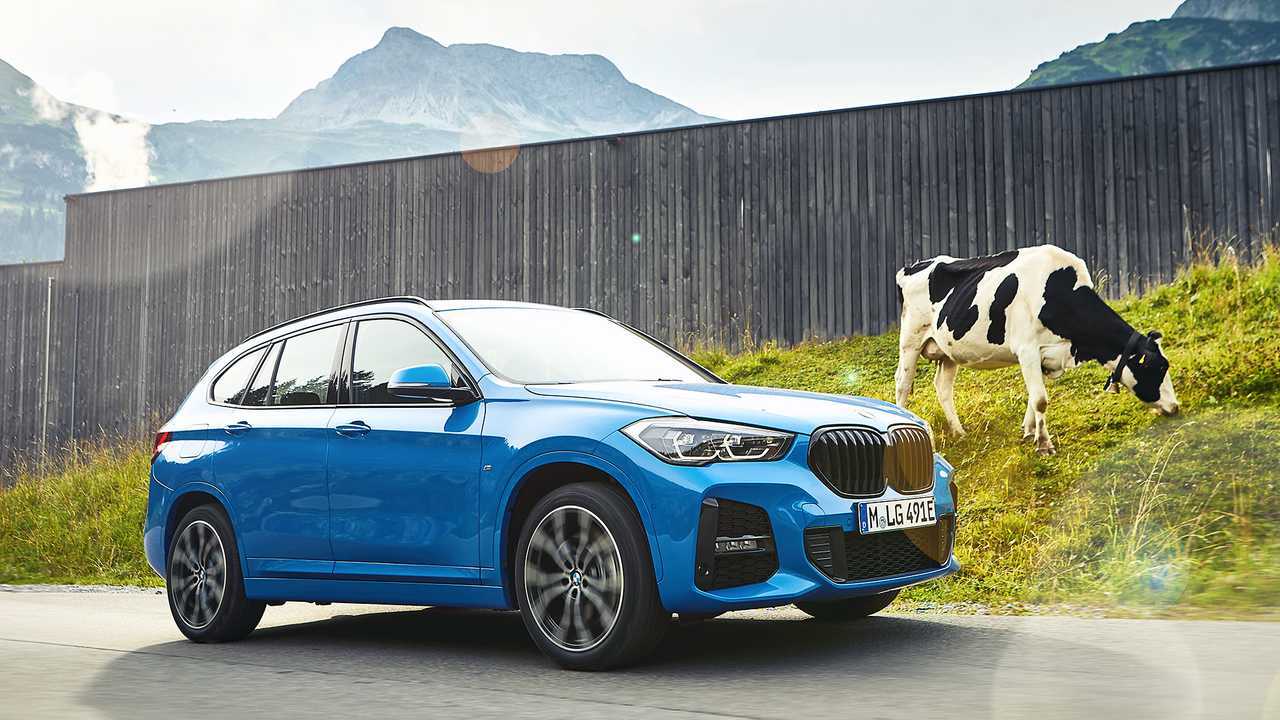 It will shortly be followed by the more rakish X2 xDrive25e.

BMW has officially announced that it will begin U.K. sales of the plug-in hybrid version of its smallest crossover, the X1. In PHEV guise it’s called the X1 xDrive25e and it can be had from £38,200 - order books are already open and deliveries are expected to begin in March of this year.

The X1 xDrive25e has an updated version of the powertrain we’ve already seen in the 225xe Active Tourer compact people carrier. With a combined output of 217 horsepower and 284 pound-feet (385 Nm) of torque, it makes almost exactly as much power as the 2 Series PHEV, but it is one tenth slower to sprint to 62 mph, with a claimed time of 6.9 seconds; top speed is 120 mph.

It mates the same 123 horsepower 1.5-liter turbocharged three-cylinder engine to a 94 horsepower electric motor, but unlike most plug-in hybrids, it doesn’t send power to the wheels through a continuously variable transmission. BMW has opted for a traditional six-speed torque converter automatic.

Thanks to the 9.7 kWh lithium-ion battery pack, the X1 xDrive25e has a claimed electric-only range of 35 miles, and it can reach a top speed of 84 mph without having to fire up the internal combustion engine. This means you will be able to drive it for short highway trips on electricity alone, all while keeping up with traffic.

Charging the battery from flat to full takes around 5 hours, or around 3.8 hours if you only want to charge it to 80 percent. If you opt to have a BMW i Wallbox at your home, the time drops to 3.2 hours for a full charge or 2.4 hours to charge up to 80 percent.

You’ll be able to tell the X1 xDrive25e apart from non-plug-in X1s through its specific badging and by the flap that covers the charging port located on the front left fender. Otherwise, it looks exactly like any other X1 - some buyers will appreciate this low key approach, whereas others may want a vehicle that’s shouts about its plug-in nature more.

BMW also mentioned that the order books for the sleeker X2 xDrive25e will open soon. It points out the X2 is slightly quicker to sprint to 62 mph (6.8 seconds) and its top speed rises to 121 mph. In terms of pricing, the regular X2 is just under £1,000 more expensive than the X1, so you can expect the x2 xDrive25e to cost from around £39,100 when it becomes available later this year.

The BMW Group’s ongoing commitment to electrified technology is exemplified in its continuous development of electrified powertrains. Thanks to recent advances in battery cell technology, new BMW plug-in hybrid models are extending the possibilities of locally emissions-free driving – both in the city and beyond. With the introduction of the new BMW X1 xDrive25e and the new BMW X2 xDrive25e**, which both take full advantage of the latest-generation lithium- ion battery technology, BMW customers now have even more choice in the premium compact segment.

**Confirmed UK specification, performance and pricing for the X2 xDrive25e to follow later in 2020.

A highly efficient electric drive and a latest-generation lithium-ion battery enable an electrically powered range of up to 35 miles in the two new plug-in hybrid models. With average fuel consumption of 134.5 – 148.7 mpg* and CO2 emissions between 43 and 48 grams per kilometre*, both models set a benchmark within their competitive fields. The hybrid-specific all-wheel drive system delivers fast and precise distribution of power between the front and rear wheels, ensuring a high level of driving agility.

The plug-in hybrid system of the new BMW X1 xDrive 25e and the new BMW X2 xDrive25e consists of a 1.5 litre 3-cylinder petrol engine with BMW TwinPower Turbo Technology and an electric drive specially developed for this model, derived from the BMW Group eDrive modular technology. The petrol engine mobilises a peak output of 125hp and a maximum torque of 220Nm. It transfers its power to a 6-speed Steptronic transmission and drives the front wheels. The electric motor generates an output of 95hp and delivers 165Nm of torque to the rear wheels via a single-speed transmission. This makes for a hybrid specific all-wheel drive, which gives these models a unique level of agility in their class. The electric motor’s highly responsive power delivery provides maximum torque spontaneously from standstill, enabling the driver to react extremely quickly to changing driving conditions. In addition, the position of the electric motor above the rear axle contributes to the balanced axle load distribution. The intelligently controlled interaction between the two power units provide maximum driving stability, ride comfort and dynamic response.

Together, the combustion engine and electric motor produce a system output of 220 hp. The maximum system torque of both drive units is 385Nm. The new BMW X1 xDrive25e accelerates from 0 to 63mph in 6.9 seconds, whilst the BMW X2 xDrive25e does the same in 6.8 seconds. In addition, the electric boost provided by the drive system ensures intense sporty flair when required. The top speed of the new BMW X1 xDrive25e is 120 mph, and 121mph for the BMW X2 xDrive25e.

With the very latest high-voltage battery cell technology, the new BMW X1 xDrive25e and the new BMW X2 xDrive25e possess generous reserves of electrical energy enabling the driver to conduct most of their everyday travel locally emissions-free. The latest-generation lithium-ion battery has a gross energy content of 10 kWh. This allows for an electrically powered range of between 33 and 35 miles in both the BMW X1 xDrive25e and BMW X2 xDrive25e. The high-voltage battery can be charged at conventional household sockets using the standard-equipment charging cable. An empty battery can be fully charged in around five hours in this way. It only takes 3.8 hours for the battery to reach 80 percent of its total capacity. Using a BMW i Wallbox, the relevant charging operation from 0 to 100 percent takes less than 3.2 hours.

Eighty percent of total capacity is already reached after 2.4 hours. The charging socket is located under a separate flap on the front left side wall of the car.

The driver can use the eDrive button on the centre console to influence the drive system’s operating mode. In the AUTO eDRIVE standard setting, the intelligent drive system ensures optimum interaction between the two power units in all driving situations. Navigation data is also used to manage the plug-in hybrid system to increase the efficiency as well as driving pleasure. When navigation guidance is activated, the anticipatory energy management can also take into account the route profile for controlling the drive system. The MAX eDrive mode can be activated for maximum use of the electric drive. In this mode, the new BMW X1 xDrive25e and the new BMW X2 xDrive25e reach a top speed of 84 mph. In addition there is also the SAVE BATTERY mode which enables the driver to maintain the charging state of the high-voltage battery while driving or to increase it by means of recuperation. Using this mode, battery capacity can be saved for later use, for example when arriving at your destination in purely electric mode.

The new BMW X1 xDrive25e and the new BMW X2 xDrive25e feature acoustic pedestrian protection as standard. When driving electrically at speeds of up to 19 mph, an unmistakable sound designed specifically for electrified BMW models is generated to alert other road users to the approaching car without impairing the acoustic comfort of the vehicle occupants.

The standard equipment of the two compact BMW X models with plug-in hybrid drive also includes 17-inch light alloy wheels, 2-zone automatic air conditioning as well Sports Seats and LED headlights in the UK market. The interior can be pre-conditioned remotely via BMW Connected using a smartphone. The new BMW X1 xDrive25e is available in Sport Line, xLine and M Sport in the UK. Virtually all options available on the conventionally powered BMW X1 are available for the plug-in hybrid models.

As a pioneer in electric mobility, BMW intends to have more than one million vehicles with electrified drive on the road by the end of 2021, by which point 25 percent of the vehicles sold by the BMW Group in Europe are expected to feature an electric drive. By 2025 this figure is scheduled to reach 33 percent and 50 percent by 2030. The BMW Group plans to extend its portfolio to 25 electrified vehicles by 2023.

*Fuel consumption, CO2 emission figures and power consumption were measured using the methods required according to Regulation VO (EC) 2007/715 as amended. The figures are calculated using a vehicle fitted with basic equipment in Germany, the ranges stated take into account differences in selected wheel and tyre sizes as well as the optional equipment. They may change during configuration.

The details marked * have already been calculated based on the new WLTP test cycle and adapted to NEDC for comparison purposes. In these vehicles, different figures than those published here may apply for the assessment of taxes and other vehicle-related duties which are (also) based on CO2 emissions.

The BMW Group
With its four brands BMW, MINI, Rolls-Royce and BMW Motorrad, the BMW Group is the world’s leading premium manufacturer of automobiles and motorcycles and also provides premium financial and mobility services. The BMW Group production network comprises 31 production and assembly facilities in 15 countries; the company has a global sales network in more than 140 countries.