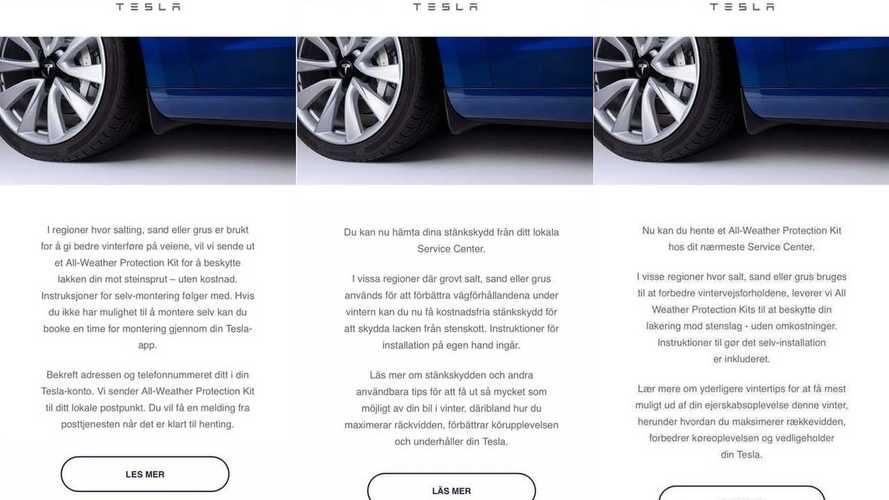 Is this the cheapest way to protect soft and thin paint?

When we wrote that Tesla was offering a free all-weather kit for its cars in Canada, we wondered if this was just generosity or a strategy to protect the Model 3. After all, a Finland study already said one unit of the Tesla had had soft and thin paint, and similar complaints started coming from many other countries, such as Canada, Sweden, Denmark, and Norway. Surely not by coincidence, clients in these places are now getting free all-weather kits as well.

As we mentioned in our first article, these kits consist of mudflaps that prevent paint chipping on the car’s rocker panels, fenders, and bumpers. As aftermarket equipment, these kits range from $20 to $40. We have done a calculation on how much Tesla would spend with them solely in Canada, and that would be around $4 million in the best-case scenario.

Tesla Will Pay For Mudflaps In Canada: Generosity Or Strategy?
⠀

Add to that equation four more countries, some of them with the most significant market shares in the world for EVs, and that amount will soon get even higher. We would not doubt Model 3 units for these places would already be equipped with these mudflaps as standard.

Guillaume André, a Canadian technician, said the issue is caused by a design flaw that makes the dirt in the road hit the lower parts of the Model 3 body, but would that be enough to make the car paint so vulnerable?

The affected owners are often accused by Tesla supporters of driving their cars mostly on gravel roads, but some have never taken them out of the asphalt. The excuse then becomes the salt used on these roads in the winter. Truth is some have bought their cars in the summer and started having issues weeks after that.

It is clear this is a stopgap solution created in a way that does not admit the car may have the paint issues owners all over the world describe. By making it a goodwill attitude – available for the clients that desire it – Tesla does not recognize there is a problem with the paint.

It makes it look like a gift for additional protection, a present for owners that want to take more care of their EVs. There is no reference to the fact that it will probably affect the range of the cars by making their air drag bigger than it was supposed to be. Not a problem at low speeds, but perhaps a hassle in highways – especially if these mudflaps make wind noises.

PPF, or paint protection film, is something that would perhaps be more effective but probably too expensive to offer as a gift. Regardless, most Model 3 owners recommend getting it as soon you get your new EV.

Apart from these countries, France and Germany also had cases of paint chipping in their Model 3 units. Will they get included in the gift list? If you live elsewhere and also have chipping problems with your Model 3, please let us know about them.