Fantastic News: Roosi Is Fine And Still Driving Around Tallinn

Anyway, the now almost 95-year-old granny does not plan to drive the Tesla Model X again.

One day after Thanksgiving, we were thankful that the world had people like Roosi. In 2017, when she was 92 years old, she drove a Tesla Model X for the first time and compared that to driving a GAZ-M20 Pobeda. But we were also curious and concerned to know how she is now. According to Tarmo Tähepõld, from Geenius Meedia, she is fantastic. And about to celebrate 95 years of living next January. If you are asking, the answer is, “yes, she’s still driving!” 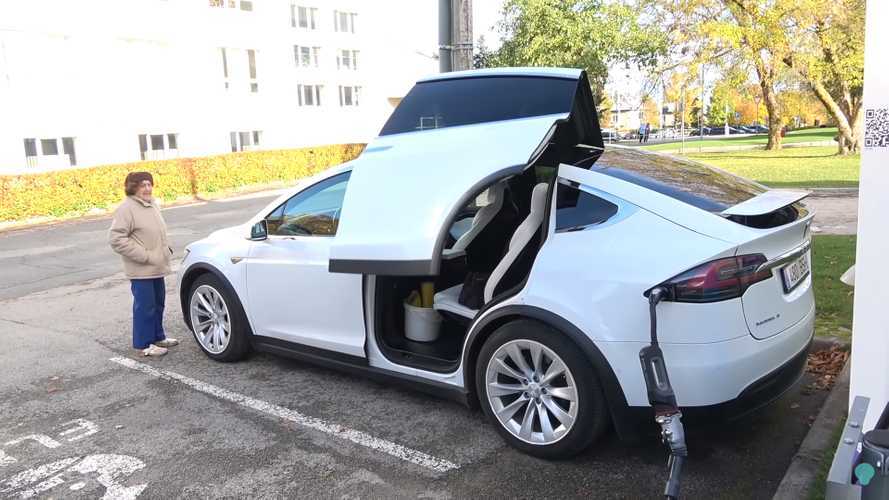 “She is my neighbor and I talk to her often. She's still driving during the summer season and just a couple of weeks ago she put her Moskvich in the garage for the winter. She's been driving her Moskvitch since she bought it brand-new in 1985. Before that, she drove different cars but her favorite has been the Pobeda. In the video, she said that the Tesla is similar to Pobeda!”

What Happened To This 92-Year-Old Granny That Drove A Tesla Model X?
⠀

Roosi, who prefers not to have her last name disclosed, just loves driving. It has been a significant part of her life, and it still is when the car is not protected from the Estonian winter in her garage, as it currently is.

“She's been actively driving all her life and her late husband rarely drove. At some point, I think it was in the 1950s, they even had a Fiat 1500B. Her husband repaired it and sold it and then went to St. Petersburg – Leningrad, back then – to buy a Pobeda. But he returned with a Buick, which was a super rare thing in the Soviet Union. She could not recall the exact model but most likely it was a Buick Series 90 Limited. This one was also sold quickly for being too big and because getting spare parts was almost impossible. Roosi said that only Brezhnev had this kind of Buick.”

Tähepõld told us more about her driving life.

“Then came two Pobedas and two Moskvitchs, one of which is her car until today. She mentioned her car is from 1975, but that actually means that her first Moskvitch was bought around 1975. In 1985, she managed to buy a newer version.”

In other words, her current car is ten years newer than we previously thought. It probably already counts 34 years of loyal services to Roosi.

Tähepõld is a fellow motoring writer, and he has been trying to tell her story for years. But Roosi, as you have noticed, is a low-profile lady.

“She liked the project and was both happy and disturbed about the attention she got. After the Tesla video, she first time experienced the power of the internet by receiving calls from relatives in Australia and the US: ‘We saw you driving Tesla!’ Roosi was quite overwhelmed. After that, I've been trying to get her into other projects but with no luck. So this Model X thing was a one-time-only event.”

We asked Tähepõld for Roosi tips on living and driving for so long, and here is her answer:

“She gave a piece of very specific advice to all that she learned from her driving teacher. Before you step on it think that either you arrive home one hour earlier or half an hour earlier to the graveyard. She also jokingly said that the traffic these days is so awful and dangerous that she does not dare to walk. That is why she's driving a car.”

In these 60 years of driving, Roosi had just one accident, rear-ending a car in front of hers. We bet the Moskvitch sustained minor or no damage at all.

“It was a couple of years ago in Tallinn. Somebody stopped suddenly in front of her and the brakes of Moskovitch were no match to modern ones.”

We hope that Tähepõld convinces Roosi to be in more videos, especially with electric cars.

“Every autumn she says that ‘that's it, now I am done and next year I won't drive anymore.’ But when the spring comes, she takes her 34-year old Moskvich out and goes again. How long she continues to drive she does not know, but driving is her life and she never gets bored with it. Even this summer, when there were huge road constructions on her main route to her country house, she discovered a super nice B-road that she enjoys especially much.”

May Roosi keep cheering us up on what life is for and on the cheers of driving. We know Tähepõld will keep us posted about her. Trade your Moskvitch for an EV, Roosi!