For reasons we don't fully understand, there has been a lot of talk lately about an electric pickup truck from California automaker Tesla. We know: weird, right? In any case, we've been reminded a lot recently that there is this thing out there called the Truckla: a mini-pickup whittled from the carcass of a (perfectly good) Model 3 by one Simone Giertz. It's really cool. 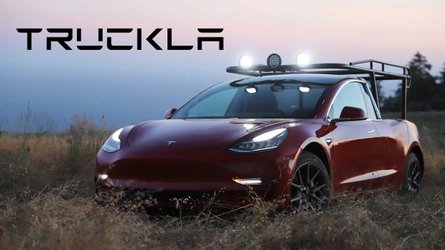 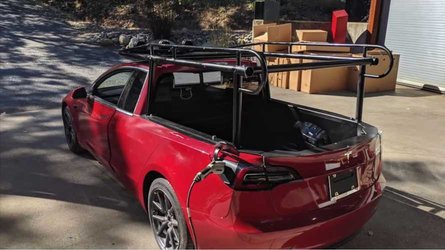 So, we were pretty excited to see a video (above) appear on Giertz's YouTube channel and we're eager to share it with you (hit the play button, already). If you haven't watched it yet, we'll break down all the action for you and hopefully, if you've not been inspired to watch it already, you will be.

The premise of the video begins in one way – a little trip around the San Francisco Bay area to watch how many people react to Truckla by staring or pulling out there phones to capture a quick image or video – but veers off in a couple of different directions before coming back to people watching Truckla watchers. The main sidetrack is a visit to SoCal to attend the reveal of the Tesla Cybertruck. In case you were unaware of it, that's the electric pickup truck we alluded to at the top of this post.

Despite being asked not to actually bring Truckla to the event, Giertz rolls onto the premises in her fabulous creation unchallenged. Later, we get to see Giertz's reaction to Cybertruck after it rolls up on stage and (metaphorically) shocks all onlookers. It's a great moment.

Because of where she parks, we're actually able to see the two vastly different vehicles captured on film in the same frame, which makes for an interesting opportunity to compare and contrast the two approaches to building a utilitarian-type vehicle.

For some of us, a Model 3-based Truckla is all the pickup we need and we'd love to see ana official product like this offered. The problem with that now – and this is the issue with small pickups more generally – the price point between the two wouldn't be very large. Still, our hearts (ok, mine) yearn for a small, efficient vehicle like this and can only hope some automaker out there sees the potential in such a design and builds it. Preferably with a crew cab option.