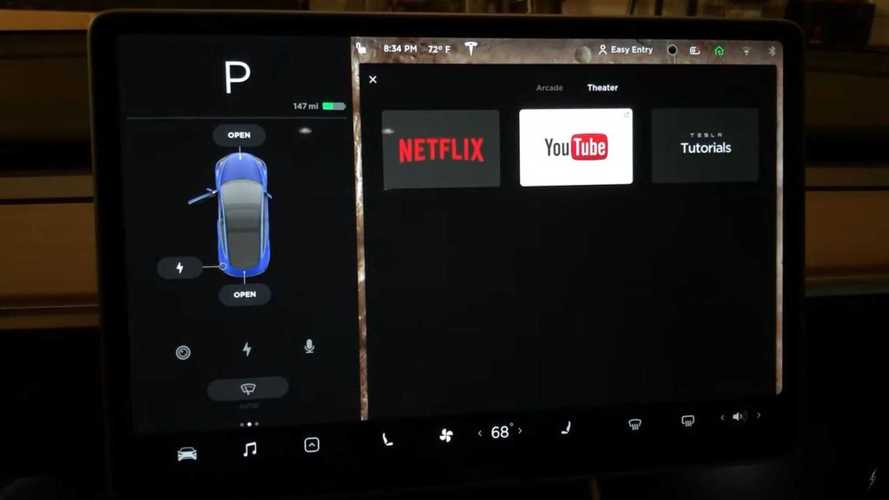 It's packed with goodness.

Tesla's V10 software update marks the company's latest advances improving both older and newer vehicles. Why is Tesla progressing faster than other automakers? "It's the software, stupid," says MIT lecturer Lou Shipley. V10 is further proof of Tesla's ever-evolving software edge. To learn more, check out a sneak peek thanks to Tesla owners in the early access program. Keep in mind that this is an early access version of Tesla's V10 software update, meaning that its wider release would (likely) include some changes to what's seen here. Tesla owner 'All Electric' released a video that showcases many of the new features being added, particularly Tesla Theater and Caraoke, two features Elon Musk has been hinting at for months.

Probably the most anticipated feature to be added in the V10 update, Tesla Theater will allow you to stream video content from sites such as Netflix and YouTube right onto your car's display. Currently the only options are Netflix, Youtube, and Tesla Tutorials. We do not know if/when other streaming video services will be added. Tesla owners in China are also reporting that Tencent video and iQiyi are available. Tesla's release notes state:

Tesla Theater lets you watch movies and videos when your car is in PARK and connected to Wi-Fi. To launch the Tesla Theater, tap the new ‘Entertainment’ Icon in the Application Launcher and select the Theater tab. Note: Throughout the duration of the Early Access program you can also stream videos over cell.

So it’s important to note that while Early Access members will be allowed to use cell data to stream videos, this will be limited to Wi-Fi only once V10's wide release rolls out. Musk stated that eventually, all Supercharger locations will have free Wi-Fi.

One of the most impressive (and anticipated) video games added to the Tesla Arcade is the critically-acclaimed Cuphead known for its difficulty and ultra-cool style of artwork. Tesla's release notes state:

Cuphead is a classic run and gun action game inspired by cartoons of the 1930s and heavily focused on boss battles. For the Tesla Edition of Cuphead, enjoy the game’s full first Isle as you play as Cuphead or Mugman (in single player or in local co-op). Traverse strange worlds, acquire new weapons, learn powerful super moves, and discover hidden secrets while you try to pay your debt back to The Devil!

Interestingly enough, it seems that the Tesla version of the game only includes the first of the three islands within Cuphead. Hopefully, future updates will add the remaining chapters. No need to fret though as the first island should provide you with plenty of gameplay. Cuphead could also be the perfect game to test out Tesla's unique ability to utilize a physical controller for gameplay within the vehicle. Below you can find footage of co-op gameplay of Cuphead for those who are unfamiliar with it.

A feature that's likely to be a fan favorite is Carakoe — providing you and your passengers an opportunity to showcase your singing skills (or lack thereof). Tesla notes:

Sing karaoke to your favorite songs and artists in your car. You can select Caraoke from the Media menu. Tap the microphone icon to adjust whether the vocal track plays while you sing along. Note: Displaying the karaoke lyrics requires the car to be in PARK. Sure, lyrics appearing while driving might be fun during long road trips for passengers, but safety (for the driver) should always take precedence in situations like this — still, this could make for some fun downtime at Supercharger stops.

Here's a quick demonstration of the feature:

Changes to the look of automatic lane changes have also been made. The display will now highlight the lane that your Tesla intends to merge into and include a white outline of where (in that lane) your Tesla plans to be at the end of the lane change. This should help give the driver a better understanding of Tesla’s Autopilot decision making. Tesla's release notes say:

The feature can be seen below in action.

Speaking of the navigation system, Tesla has introduced improvements to map functionality. The release notes state:

We have improved maps to make it easier to find and navigate to where you want to go. When searching for a destination, the autocomplete search now includes the distance to each suggested place. Also, you can now directly tap the labels on the map to quickly view the associated place details and navigate to that destination.

Sentry Mode has also received a convenience update. Sentry Mode's video clips will now be saved in a separate folder in your USB drive in order to make it easier to manage. Additionally, older clips will be automatically deleted if the drive is running out of space.

Sentry Mode video clips are now saved in a separate folder on your USB drive to make them easier to review and manage. Also, the older Sentry mode video clips will now be automatically deleted if there is not enough space on the USB drive and Sentry Mode clips are using more than 5 GB of space.

For those that are still having issues with Teslacam and Sentry Mode, check out some of the online guides on how to get it working.

Joe Mode is a handy feature in Tesla's V10 update — one that parents of small children will undoubtedly appreciate. Joe Mode will lower the volume of Tesla's alert chimes. The chimes are intended to still be audible to the driver, but not loud enough that it will disturb passengers, e.g. a sleeping baby.

Finally, there can be an easy answer to the age-old question, "I don't know, what do you want to eat?" With this fun, new feature, simply press the "Hungry" button in the Navigate menu and your Tesla will direct you to a recommended place to eat. Pressing the "Lucky" button will route you to a recommended attraction that can kick off a spontaneous adventure. The release notes write:

Feeling lucky or feeling hungry? Go on a surprise adventure to a nearby attraction by tapping Navigate > Lucky or get directions to a local restaurant chosen by your Tesla by tapping Navigate > Hungry. We have also updated the place pop-up to include easy access to a website associated with the location if one exists.

This feature can introduce Tesla owners to new local hotspots. It may also help Tesla attract more establishments to sign up for Destination Charging. In addition, off-the-radar local businesses might see increased patronage with such a feature.

With this new update, the application launcher has been rearranged and optimized for easier access. The Phone App will now sit at the front of the list, closest to the driver. In addition, Tesla Arcade has also been replaced with an Entertainment button that leads to both Tesla Arcade and Tesla Theater.

The application launcher has been reordered to make it easier to launch the Phone App. We have also replaced the Tesla Arcade with Tesla Entertainment.

A few notable omissions from this update — likely coming soon — include Smart Summon and better stop sign/traffic light recognition. But, as noted prior, this is not the final release version of Tesla's V10 update, and features are subject to change. It's all part of Tesla's long history of constantly improving and upgrading its fleet over time.