What's Beneath The Frunk Of A Tesla Model 3? 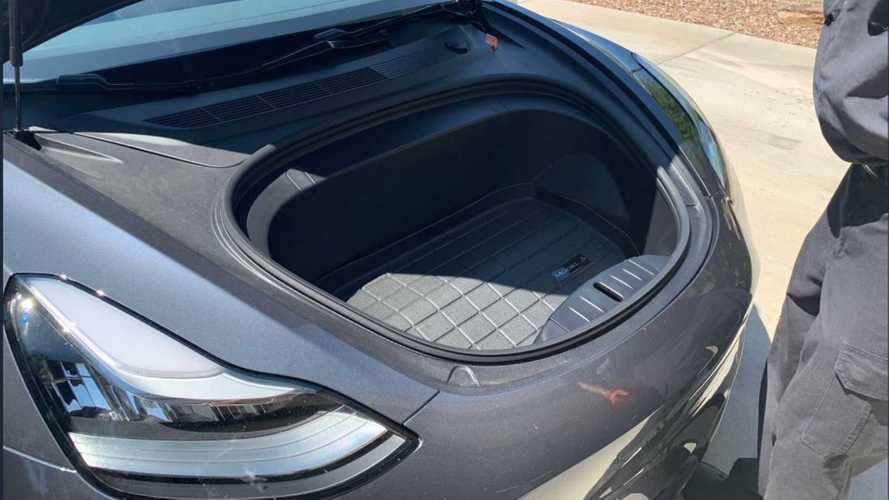 It's much busier than you might think under there.

What's hiding under the 'frunk' (front trunk) of a Tesla Model 3? Solve the mystery with the following photos taken by Model 3 owners during a recent visit from a Tesla Mobile Service tech who visited for a small fix.

Above: A look at the Tesla Model 3 frunk before the removal of the frunk's cover-case (Source: @vandyish / Twitter)

The term 'frunk' is another fun part of the Tesla vernacular. It serves as a convenient luggage storage space at the front of the vehicle. A frunk would be tougher to cram inside an internal combustion engine car (as there's less free space and a lot of heat emanating from the engine block).

The owners of this Model 3, within just 2 months of taking delivery, have already driven the car over 5,000 miles (8,000+ km). Why? Apparently they're having a blast driving their Tesla. According to them, it's far superior to any ICE vehicle they've owned in the past. Actually, the Dodge collecting dust in their garage is already up for sale, creating space for another Tesla.

Other Tesla owners from Arizona have also reported an excellent experience using Tesla's Mobile Service. Once this initiative is rolled out all over the globe, Tesla could have another edge over competing legacy automakers.

To lubricate the steering column, the tech needed to remove the frunk cover-case and the owners snapped a couple of pics to showcase what it looks like underneath the frunk. It's a revealing look at Tesla's engineering laid bare. Even though there's no engine inside, there's still a lot going on here.

Check out the heating and air conditioning equipment as well as the 12v battery. The 12v is used to power the media control unit (MCU), all the lights, and in case of a total disconnect or primary battery drain — it's basically used to power critical components of the Model 3. The purpose of the 12v battery is explained in-depth by TeslaTap, a worthwhile read for every Tesla owner.

That said, it's conceivable that the use of the 12v battery in Tesla vehicles could (eventually) become obsolete, or change, after recent progress made with the new revolutionary Tesla wiring harness patent.

Above: A look under the front trunk aka 'frunk' of a Tesla Model 3. Click/Tap images to open HD version in new tab (Source: @vandyish / Twitter)

While it's great that some legacy automakers also have a bit of frunk space in their electric cars, many don't seem able to optimize it properly. Case in point — the Audi e-tron's frunk is quite small. In any event, Tesla's innovative (and expansive) frunk design is yet another differentiating factor that provides additional storage capacity to the award-winning Model 3.