Tesla has the best brand awareness and buying intention among all EV makers.

The study Cox Automotive presented about EV adoption showed us the consumer’s perspective on buying an electric car and what they fear the most when doing so. It also showed us the dealers’ perspectives in selling them. But its most interesting aspect was probably to highlight – even if just in some aspects – the importance a single brand has had in pushing EV adoption forward in the first place. That brand, as you may be aware, is Tesla.

Cox Automotive did not mention the fact that Tesla was the first company that made EVs desirable with the Roadster. GM and Toyota have tried to build EVs – respectively with the EV1 and the RAV4 EV – way before Tesla, but they were mostly research or compliance vehicles. 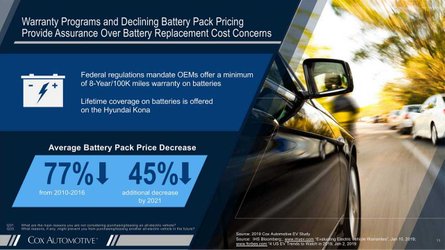 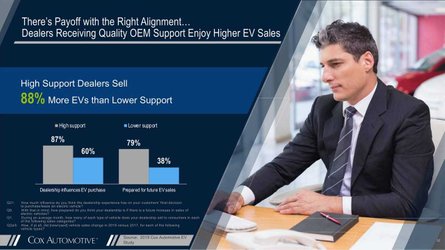 What Is Hampering EV Sales? Cox Gets Answers From Dealers

Nissan and Mitsubishi have tried to follow it – respectively with the Leaf and the i-MiEV – but they did not even scratch the charisma surface Tesla built for itself. With the Roadster and the Model S, Motor Trend’s Ultimate Car Of The Year. And the Model X. And the Model 3. It is an ongoing process. And a very successful one.

Cox Automotive did not mention any of that. The company just looked at market facts. And they are impressive.

If Tesla did not exist, the EV market share in the US would be stagnant despite all the current electric vehicles put for sale in the country. And the more than 100 new EV models that will be available until 2022.

When you look at the slide below, the fact that consumers believe EVs will be a major trend in the future – 70 percent of them – seems to make no difference in their willingness to buy one. But this is not the important part here. Check the orange and blue lines on the right.

They show EV sales with (blue) and without Tesla (orange). In Q2 2016, Tesla managed to have the same consideration level of all other EVs together for the first time. From Q1 2017 until Q2 2018, it kept that condition constantly.

In Q3 2018, a little after Tesla managed to produce more than 5,000 cars in a week in Fremont, the company had 1.5 times the buying consideration the rest of the competitors had.

And it even seems to have boosted consideration for other EVs on Q4 2018. Probably because people wanted to buy a Model 3 and did not manage to do that because deliveries were taking a lot of time.

Tesla has the best brand awareness among EV producers. For advertising teams despair, since it never spent a dime on any sort of promotion. The study shows 81 percent of consumers recognize Tesla as an EV producer.

The company that gets closer to it, Toyota, does not even have a proper BEV for sale, but its work with hybrids probably placed it in the minds of 52 percent of customers as an EV manufacturer.

Chevrolet, which offers the Bolt EV, the Volt, and once also had the Spark EV, comes a little behind Toyota, with 47 percent of people that know it also sells this type of vehicle. Tesla is miles ahead of them. Volkswagen, with its massive investment in the ID Family, sees just 18 percent of people aware of its electrification efforts.

Many do not really want an EV. They want a Tesla, which happens to be electric. This is how important the American EV manufacturer has become to electric mobility. This is what mainstream manufacturers are after.

This is the company that made a conspiracy theory make perfect sense, probably while it develops. The GM that did not scrap the EV1 nor sold its nickel-metal hydride batteries business to Texaco.

We can’t wait to see what will happen when the Model 3 starts to be built at the Gigafactory 3 in China. And the Model Y. And the Tesla pickup truck. Probably way before anyone would expect those things to happen.

Tesla may behave like a traditional automaker sometimes, as with the paint issues with the Model 3. But electric mobility has an undeniable debt to the company. If it fixes the mistakes, it can surely still make great things for a cleaner and safer transportation.

27 Photos
By: Gustavo Henrique Ruffo
++
++
Got a tip for us? Email: tips@insideevs.com