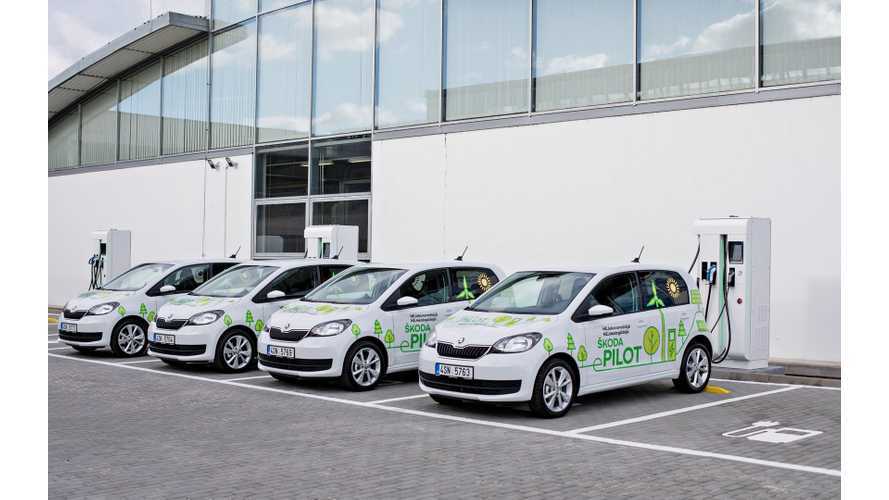 Series production of electric Citigo to begin in Q4

Škoda announced the launch of the eMobility pilot project in the Czech Republic - Škoda Citigo E-Pilot - with 10 electric Citigo prototypes, based on the current generation of Volkswagen e-up!.

The goal is to collect some mileage with selected customers behind the wheel and maybe adjust the final product to better suit customers needs - "The participants’ experience from everyday use and their specific suggestions will serve as important feedback".

Škoda said however that the prototypes have completely different characteristics than the later all-electric Citigo production model, which is expected to get a higher capacity battery for double the range. According to German media, the range could double (compared to Volkswagen e-up!) to 270 km (168 miles) under new WLTP test cycle.

PushEVs.com suggest battery capacity of 37.4 kWh (instead 18.7 kWh) by using 50 Ah lithium-ion cells in place of 25 Ah cells. We assume that the e-up! also will get battery upgrade later this year, because the newest/best tech always progresses from VW towards satellite mainstream brands in the Volkswagen Group.

The electric Škoda Citigo to be introduced on the market in Q4 2019. It will be accompanied by a plug-in hybrid Superb model.

In total, by the end of 2020 at least 10 plug-in models to be introduced (one-third of over 30 planned). To conduct electrification smoothly, all trading partners in the Czech Republic (and probably gradually in other countries) will install charging stations at their sales and service sites.

About the Škoda Citigo E-Pilot:

"2019 is a very special year in ŠKODA’s 124-year history: The traditional Czech car manufacturer is entering the era of e-mobility with the all-electric ŠKODA CITIGO and the ŠKODA SUPERB with plug-in hybrid drive. As part of a pilot project, ŠKODA is now making the CITIGO E-PILOT available to selected customers in the Czech Republic. The aim is to find out from prospective and potential customers how the vehicle based on the current technology known from Volkswagen e-up! performs in everyday operation before series production of the electric CITIGO begins.

Ahead of the launch of eMobility, ŠKODA is testing prototypes of the electric CITIGO as part of a pilot project. Selected companies, fleet customers and state authorities will be heading out on the road in ten copies of the ŠKODA CITIGO E-PILOT. Before the start of series production, the Czech car manufacturer would like to gain feedback and valuable suggestions from the testers and customers who will be putting the vehicle through its paces in everyday operation.

Sensors on all test vehicles will record important data such as the outside temperature and the temperature in the car, and acceleration of the test vehicle. All data will be automatically sent to the Technical Development department at ŠKODA and evaluated there. In this way, it will be possible to gain insights into the use of the vehicle and determine how the battery performs during everyday operation and charging."

“ŠKODA is launching electric mobility in 2019 and will have introduced ten electrified models by the end of 2022. Before ŠKODA’s e-vehicles go into series production, we are collecting feedback from our customers who will be evaluating a test fleet in our home market of the Czech Republic over the coming months. As part of the ŠKODA CITIGO E-PILOT project, we are testing numerous all-electric vehicle services so that we are fully prepared for the launch of the production vehicle by the end of the year.”