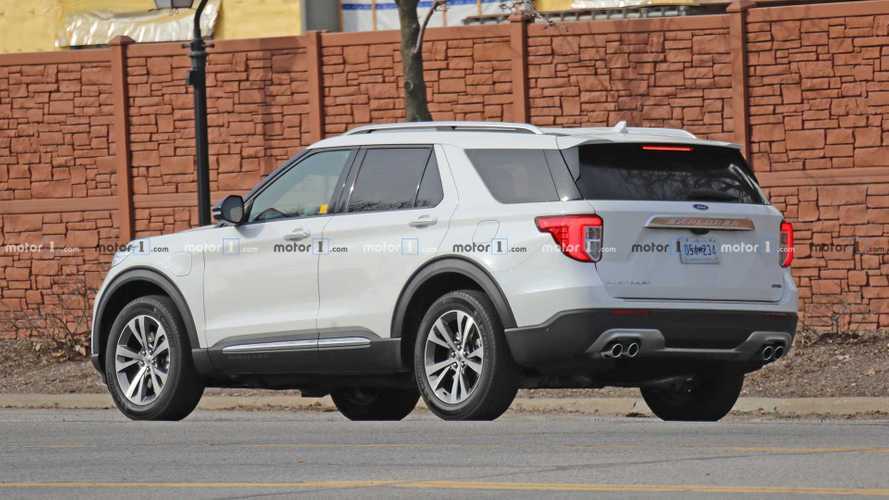 The extra fuel door on the fender is a dead giveaway.

It’s been an interesting day for head-scratching spy photos of Ford vehicles rolling around the Motor City. This morning we caught a lightly camouflaged Mustang wearing Bullitt trim and Euro-spec lights. This afternoon we saw a Ranger Raptor sporting dual exhaust belting out a V6 soundtrack. Now, we have just a couple photos of a completely naked Ford Explorer, which already debuted nearly three months ago in standard and hybrid trim at the Detroit Auto Show. So what exactly is all secretive about this white SUV?

Ford's new Explorer Hybrid is of the conventional variety, meaning its battery pack is charged by the engine or energy gained through regenerative braking. This model, however, appears to be a plug-in hybrid – look at the front fender and you’ll see a second fuel door that hides a charging port. That’s a bigger deal than most people might realize, as Ford has been rather slow to progress into the hybrid and electric realm. Lest we forget – Toyota was pumping out conventional hybrids over a decade ago. The tech in the new 2020 Explorer Hybrid isn’t exactly cutting edge, and it doesn’t offer any electric-only range.

A plug-in Explorer hybrid, however, should be able to silently roll around town for a little while at least. Our sources are completely empty on potential performance metrics for this SUV, but if we look to Ford’s upscale Lincoln  division and its new Aviator  PHEV for guidance, the Explorer could deliver over 400 horsepower while offering a modest electric-only range of around 35 miles. Granted, we don't have all the details for the standard Explorer hybrid or the Lincoln Aviator PHEV, so these figures are purely speculative. However, if Ford hopes to take a bite out of the expanding EV market, these numbers form a common sense benchmark for a plug-in Explorer to reach.

It may still be a while before we know something definitive, possibly late this year or sometime in 2020.