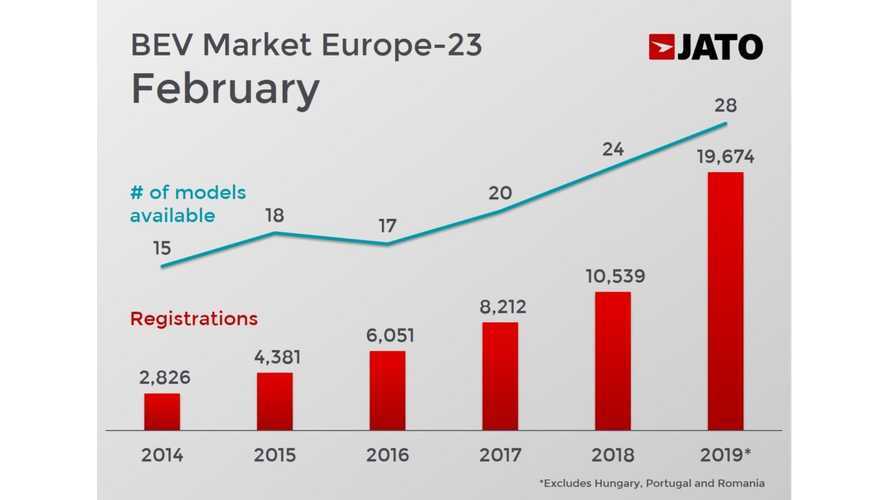 Europe is now a very interesting place to watch car sales stats as the overall market decreased for the 6th consecutive month (year-over-year), while the plug-in electric car sales increased.

One of the new, fresh and strong forces behind the growth of all-electric car sales is the Tesla Model 3, which started its surge in February. The latest data provided by JATO Dynamics gives us more insights into the situation.

First of all, Tesla and Model 3 are the top brand and model in terms of BEV sales with the highest rate of growth. But first let's look at the general results.

As it turns out, the growth of all-electric car sales was up 92% to 19,600 (at 1.9% market share), while the plug-in hybrids (awaiting reinforcement) decreased 2% to 11,000. The conventional hybrid cars increased by only 14% to 39,100, which means there is a huge chance that plug-ins will finally catch hybrids.

JATO Dynamics, in-line with previous reports, shows the best-selling all-electric cars with Tesla Model 3 on top. But mostly all major models are experiencing healthy growth, which combines with new models breaking into the Top 10, which makes us very happy. The market is really snappy and moving forward.

"The most notable result from February was the strong performance of pure electric vehicles (BEVs). Although their market share remained marginal at 1.9%, their volume increased by a huge 92% to 20,000 registrations. BEVs continued to gain traction in markets like Norway, where they counted for 40% of overall registrations, and the Netherlands, where they counted for 7%. Demand also increased by 81% in Germany, which was the largest market for BEVs in February.This increase can be explained by the introduction of new models – most notably the Tesla Model 3. The hotly anticipated car excelled during its first full month on the European market and became the best-selling BEV. The Model 3 quickly outsold other big players like the Nissan Leaf and Renault Zoe, despite being more expensive and only available for a short amount of time. Felipe Munoz, JATO’s global analyst, commented, “The performance of the Model 3 is remarkable, given we normally don’t see this kind of result until four or five months after a new car has hit the roads.”"

Finally, one of the most important findings in the stats is a comparison of premium midsize sedans: Tesla Model 3 compared to well-established ICE models.

As you can see, Model 3, in its first month, outsold competitors. Wonder what will happen in March.

"It’s also notable that most of the Model 3’s volume in February came from private registrations, which breaks the usual trend of a new vehicle’s volume being made up of business/fleet registrations. But even more remarkably, the Tesla Model 3 achieved another record in February, as it became the top-selling premium midsize sedan in Europe – outperforming the popular Mercedes C-Class, Audi A4 and BMW 3-Series. “As we’re seeing in the US, Tesla is also shaking up the European market. Its long-lasting impact will depend on how quickly the German premium makers, Volvo and JLR react to the arrival of the Model 3 to Europe and how quickly they can bring in their own midsize electric cars,” continued Munoz."