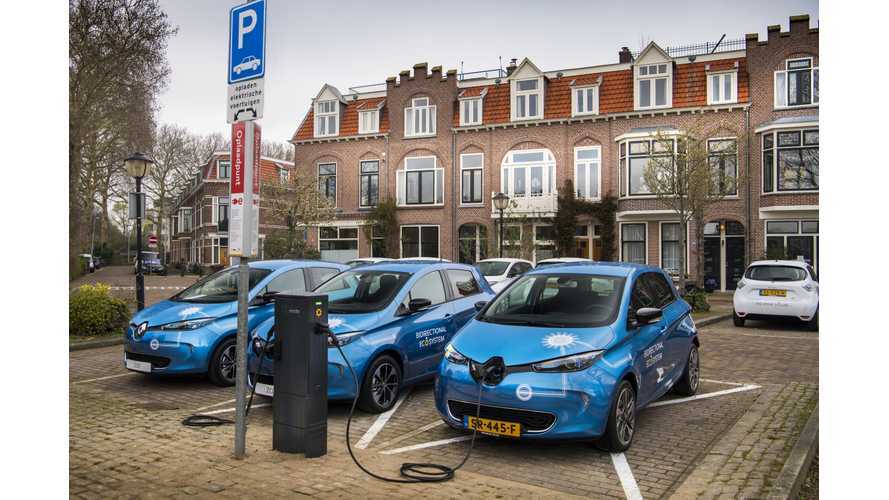 Renault announced the launch of a new pilot project of Vehicle-to-Grid (V2G) charging, which turns out to be first on a bigger scale using alternating-current.

Usually, V2G was implemented through the DC line (CHAdeMO), which required the use of an expensive external bi-directional charger. As Renault didn't yet use DC fast charging (the next-generation Renault ZOE will get CCS Combo for the first time) the bi-directional charging will be done on three-phase AC (Type 2 inlet) using a reversible on-board charging system in ZOE.

Having an on-board charger/inverter drawn to V2G, adaptation and cost on the infrastructure side are minimal.

"Groupe Renault, the European leader in electric vehicles, is beginning the first large-scale pilot schemes in reversible electric charging. Our alternating-current technology has the particularity of placing the reversible charger inside vehicles, so it just requires a simple, inexpensive adaptation of the existing charging terminals."

By launching the V2G project, Renault has two goals: "to measure large-scale feasibility and potential gains".

Over the course of 2019, 15 Renault ZOE will be tested in several European countries, beginning from the Netherlands and Portugal:

The advantages of vehicle-to-grid charging

Vehicle-to-grid charging—also called reversible charging—modulates the charging and discharging of electric-vehicle batteries in accordance with users’ needs and the grid’s supply of available electricity. Charging reaches its maximum level when the electricity supply exceeds demand, notably during peaks in production of renewable energy. But vehicles are also capable of injecting electricity into the grid during peaks in consumption. Electric vehicles can therefore serve units of temporary energy storage and become key drivers in the development of renewable energy. In this way, the electricity grid optimizes the supply of local renewable energy and reduces infrastructure costs. At the same time, customers enjoy greener, more economical consumption of electricity and are financially rewarded for serving the electricity grid.

Reversible charging will be piloted in several projects (electric ecosystems or mobility services) through seven countries and alongside various partners to lay the groundwork for Groupe Renault’s future offering. The aim is twofold: to measure large-scale feasibility and potential gains. In particular, these pilot schemes will help us:

To find out more about Renault’s undertaking in electric mobility, visit our website easyelectriclife

“With this initiative, Groupe Renault is fully fulfilling its role as a leader in electric mobility for all and as a player in the energy transition. Vehicle-to-grid charging is a key pillar of the smart electric ecosystems that Groupe Renault has set up. We have chosen onboard technology that also optimizes the cost of recharging stations and thus facilitate a large-scale development.”.