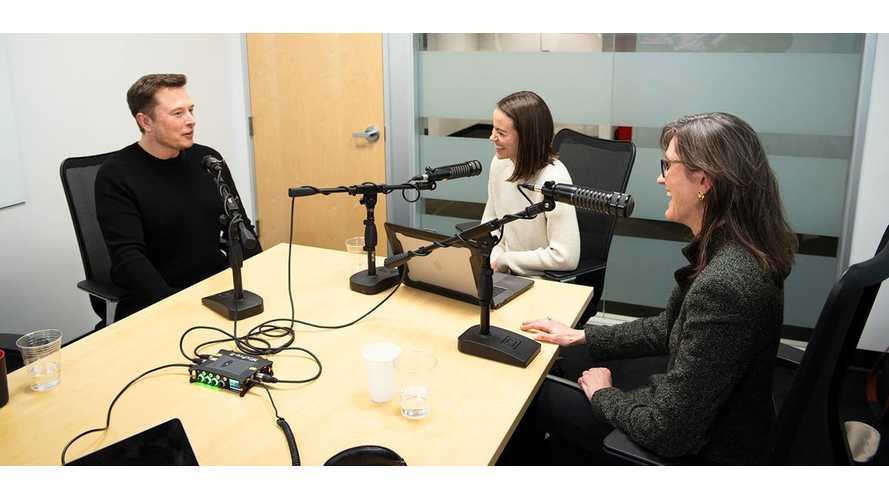 Elon Musk has lots to say about autonomous vehicle capability and Tesla. Luckily for those who'd like to hear his thoughts, he made an appearance on a podcast (audio below) by ARK Invest, where he spoke with its founder and CEO/CIO Cathie Wood, along with analyst Tasha Keeney. Published today, it sheds some light on the automaker's projected timeline and its approach to the problem of cars driving us to our destinations without intervention.

Before the half-hour discussion broached the main topic, it began with talk about electric vehicle sales estimates five years out. Basing their figure solely on projected battery prices from their analyst Sam Korus, they suggested a 20-fold increase in EV sales globally by 2023. This bullish figure would mean a third of global sales would be electric by then. Musk said this sounded reasonable, though added it could be off by a year or two.

When asked about his own outfit's output in that same period, he first prefaced his estimate by saying it would involve a lot of guesswork and that it's very difficult to predict things "on an exponential curve" because a year or two can make a huge difference. Having said that, though, he then proceeded to suggest Tesla could produce as many as 1.5 million cars by 2021 and up to 3 million vehicles in 2023.

When the conversation turned to vehicle autonomy, things got a lot more interesting and featured more bold predictions. Musk says that by the end of this year -- 2019 -- full-self-driving optioned Tesla vehicles will be feature complete. He explains thusly,

"...meaning the car will be able to find you in a parking lot, pick you up, take you all the way to your destination without an intervention..."

He goes on to state he is very certain of that progress -- he explains that he directly manages the Autopilot and engineering every week in detail -- but clarifies that doesn't mean it will be perfect or not need human oversight. There is also the issue of gaining approval from regulators to be taken into account.

Musk goes on to say that he believes the vehicles will be able to self-drive without human intervention by the end of next year -- 2020. This is a lot sooner than most autonomous vehicle experts believe the automaker can accomplish the feat, and we have to be somewhat skeptical of the prediction in light of the fact that we're still waiting for the previously touted self-driving coast-to-coast trip (with hands-free charging) that was supposed to happen in 2017.

In any case, the next two years promise to be exciting ones for fans of the California automaker and (possibly) autonomous driving. You can hear the entire podcast below, which has a lot more about why Musk is confident in his approach over others. There's even a bit about cryptocurrency there at the end. Enjoy!