See The EVs That Charged Up The Chicago Auto Show

Plug into the Windy City.

Plug-in minded attendees of the 2019 Chicago Auto Show may be disappointed if they were hoping for freshly revealed offerings. That doesn't mean traipsing around the vehicle-laden expanse of McCormick Place won't result in seeing any plug-in vehicles. There are, as we discovered, quite a number among the various exhibits. 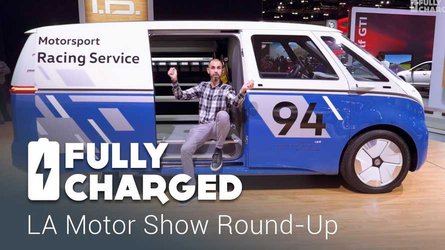 We've put together a gallery (below) of all the battery-powered vehicles we spotted for those of you who may not have the opportunity to visit the Windy City (which is indeed pretty windy, as we discovered). Besides a look at what you'll find at the show, it's also a good indication of what's available now (or arriving soon) at dealerships across the country. Notable vehicles not in attendance included anything with a Tesla or BMW badge (among several others) and, mysteriously, the Kia Niro EV, which is expected to go on sale relatively soon.

While the cars grabbed our attention, it was also interesting to see another aspect of plug-in ownership on display: the charging equipment. Almost every plug-in on display was actually plugged in. It was interesting to see the various EVSE (home charging equipment) brands in use at the various stands. ChargePoint seemed to have the largest share of vehicles, but we did note a couple of companies used equipment bearing its own branding. Oddly, in the case of the Chevy Bolt, the unit used was from AeroVironment, which sold its EVSE business to the Webasto Group.

At the risk of sounding like an auto writer who loves only the most quirky and under-appreciated of vehicles, this scribe freely admits he most enjoyed seeing the Vanderhall Edison2 in person -- hopefully available soon, but unable to confirm since its stand was unattended both times we visited. We understand our much more practical readers probably have different favorites. Hit us up in Comments and let us know which vehicle you'd most like to grace your garage.

*The author attended the Chicago Auto Show as a guest of Volkswagen, who covered his transportation and accommodations.

Gallery: See The EVs That Charged Up The Chicago Auto Show

46 Photos
By: Domenick Yoney
++
Got a tip for us? Email: tips@insideevs.com