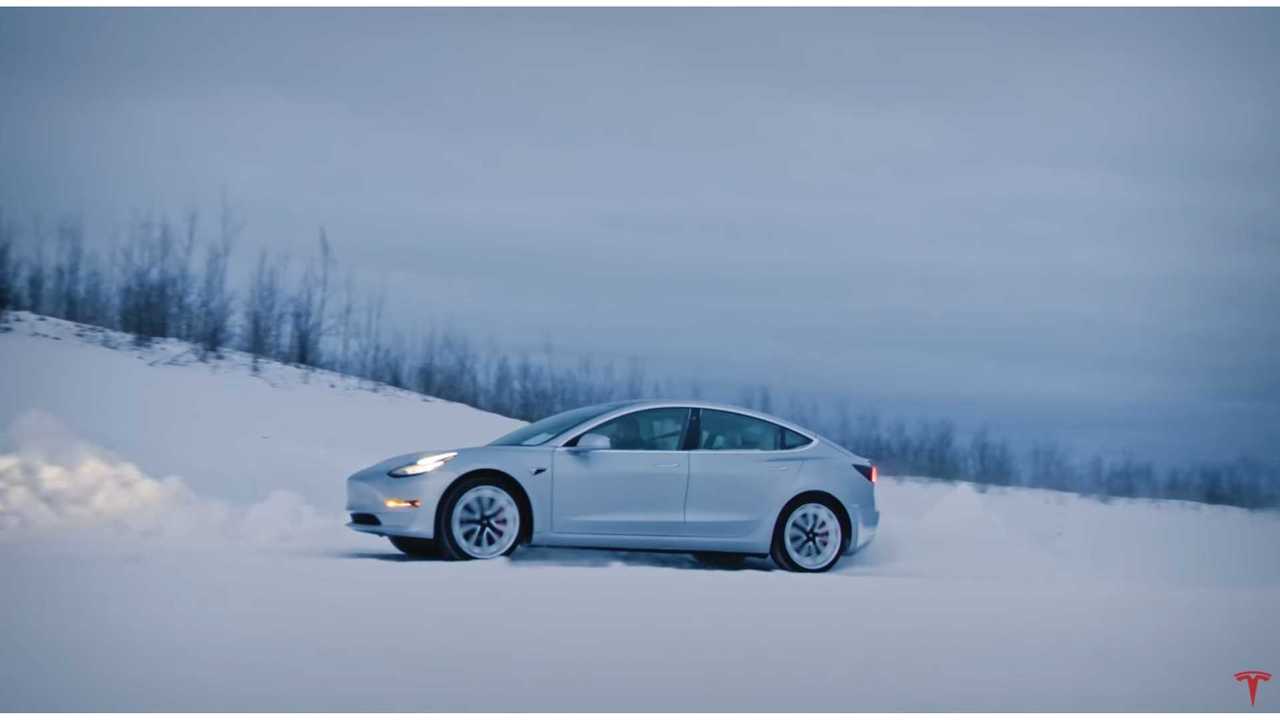 I’ve been competing in Navigational road rallying for over 30 years and it’s been one of my absolute most favorite pastimes. When I say Navigational rallies, often called TSD (Time, Speed, Distance) rallies in the United States, people often confuse this with Performance rallying as seen in the WRC series. Not the same thing! Navigational rallying is done on public roads and therefore competitors need to obey all of the applicable traffic laws. It isn’t so much a race as it is a precision driving event. The three golden rules are: stay on the road, stay on the correct route and stay precisely on schedule.

'Tesla Model 3 In Snow' Doesn't Get Much Better Than This

*This article comes to us courtesy of EVANNEX (which also makes aftermarket Tesla accessories). Authored by Ian Pavelko. The opinions expressed in these articles are not necessarily our own at InsideEVs.

Where it becomes most interesting for me is in northern climates such as where I live in Quebec.

In winter we run these types of events far out in the countryside and at night. This means we get to use beautiful winding, snowy rural roads with virtually no traffic.

Although I said that navigational rallying is not a race, because of these roads have 70 or 80 km/h speed limits trying to maintain that as an average on snow and ice at sub-zero temperatures and in the dark can be very challenging — not every driver or car is up to it, it’s an excellent test of both.

One of the things I was most excited about when Tesla Model 3 was announced was not only was this the first EV that fit the profile of exactly what I want in a car — a high-performance AWD sport sedan at a semi-affordable price point — but it was also the first EV that I thought might have what it takes to go toe-to-toe with the potent Subaru WRXs, Mitsubishi EVOs and Audi Quattros that are the traditional weapons of choice in this sport.

I was, of course, dying to find out if I was right. I had been a loyal Audi driver for the last 20 years, having had a 90 Quattro 20V, an A3 3.2 Quattro and both B5 and B7 generations of the A4 Quattros. Between the four of them they racked up more than a dozen podium finishes, mostly outright wins, so there’s no question my expectations for the Model 3 were set pretty high.

Above: Tesla Model 3 Performance on its way for the snow rally. Location: The Canadian outskirts.

Not only do I compete, but I also enjoy organizing these events, and so it was that my first chance to try the car out in battle conditions would be to run the roads as organizer of the first event on the 2019 Quebec winter event schedule, the Rallye Des Neiges.

So how is it? In a word, SPECTACULAR — especially once you put it in Track Mode. I’ve never had such laser-pinpoint precise control of a car’s attitude and trajectory just by modulating the accelerator.

After just a few minutes of acclimating to the one-foot style, it becomes so natural and confidence inspiring to be able to transition the car’s weight back and forth with just a press or lift of your right toes. And even though Track Mode lets you drift the car in big lurid power slides it never completely stops monitoring things, if it detects the car is going to go too far it will gently intervene to clean up your line. The deftness with which it does that is amazing; it’s so subtle you really need to pay attention sometimes to notice when it’s stepping in.

Above: I was really hoping to get some good in car footage from the rally last night but my new camera mount sits way too high. Epic fail as you will see in this excerpt. Promise to fix for next one! — Mad Hungarian (@IanPavelko)

Right from the start, I could see there’d be no issue maintaining or surpassing the speeds I could achieve in my Quattros. And doing it all in silence adds yet another dimension which has an unexpected benefit, without the roaring drivetrain your ears pick up on all kinds of subtle little clues as to what’s happening between the road and the tires and these valuable little audio inputs can often alert you to a change in surface or grip before the physical inputs from the chassis and steering do.

The real challenge of course came on the 'Big Night', as the organizer I can choose my own role for the event and I almost never fail to go with Course Opening Car duties. This job involves leaving the start about 15 minutes ahead of the first competitor and running the entire route to ensure that all the roads are open and safe as well as see that all the checkpoint cars are in their correct locations with the correct synchronized clocks, etc. This also means that one generally has to go FASTER than the competitors, lest they catch up or overtake me! The Model 3 Performance proved vastly up to the task, staying well ahead of schedule the whole night. The only real hitch was the temperature.

Above: Tesla Model 3 Performance snow rally race - view from inside the car of the path ahead.

After having run the route several times during the layout and checking phases in 0 ℃ to -10 ℃ weather I was able to determine that the max range at those temps while running at rally speeds and conditions would be around 150 miles or 250 km. So I simply engineered the route to stay within that distance. I also was fortunate to find a restaurant  in our start/finish location of Hawkesbury Ontario, Deja Vu, that had two 40 amp Tesla Destination Chargers so I could also be assured of leaving on a full battery and not having to worry about where to refill if I came back really low.

Many folks would be leery of running an event in such a remote area at night in the freezing cold, but after having closely monitored the cars different energy consumption graphs and trip meters I developed a great degree of confidence in being able to predict how far it was going to go based on the terrain, surface, temps and speeds.

This proved invaluable on the night of the event, as the temps dropped down to -20 ℃ / -5 ℉ and blowing snow was predicted to start about halfway through and intensify throughout the night. And it sure did.

The start was a hectic affair, we had some 34 cars competing and many were new to the sport so I took a lot of extra time at the drivers’ meeting to make sure everyone understood how it all worked and what was expected of them, especially safety procedures at the checkpoints. This meant of course that instead of leaving 15 minutes ahead of the first competitor I left, uh, 2 minutes ahead! So much for conserving battery on the first leg of highway that took us out to the rally roads.

Soon the stress of getting the event underway was out of my mind, my long-time navigator David Wood called out the route and I just hunkered down and drove. In no time we were well ahead of the competitors and had to wait in some areas for the checkpoint cars to show up!

Above: Tesla Model 3 Performance (Ian's Magneto) Supercharging before the start of the race.

It was only at the halfway point that I started to realize we might have a bit of a problem, as the battery was now showing only 45% when it obviously needed to be above 50% to get us back.

Clearly, the race to get ahead early on coupled with the much, much colder temps were taking a toll. Thankfully there was a small section of about 13 km that was a “loop”, meaning the competitors would run the same section of roads twice through before continuing on, but we could instead run it just once to make sure it was open. That made all the difference, I now could keep well ahead and not have to push the car to the limit. Of course, I did anyway. If you ever get the chance to drive a Tesla Model 3 Performance in these conditions you’ll immediately understand why. Crack cocaine has nothing on this car in fresh snow.

Above: Tesla Model 3 Performance - Battery drained down to 1% at the end of the rally, safely reached home.

As the end approached I eyed the battery and consumption graphs with vigilance, predicting we’d hit the finish with something like 1% to 2% charge remaining. Dave and his daughter Sabrina, who was in the back seat handling communications with the checkpoint and recovery car crews, grew increasingly silent. 18%. 15%. 12%... it kept counting down as the temps dropped and the snow intensified.

We began the last 22 km section to the finish with a lonely 8% showing. Time for some 'Faith In Science'. As we approached the outskirts of the town we hit 3%. Over the tall bridge into the town center, we hit 2%. And as we rolled into our parking spot at the restaurant… 1%.

So the Performance Model 3 clearly has what it takes to excel in this sport. Now all I need is for someone else to organize an event within the car’s winter rally range capabilities so that I can compete and prove it for real.