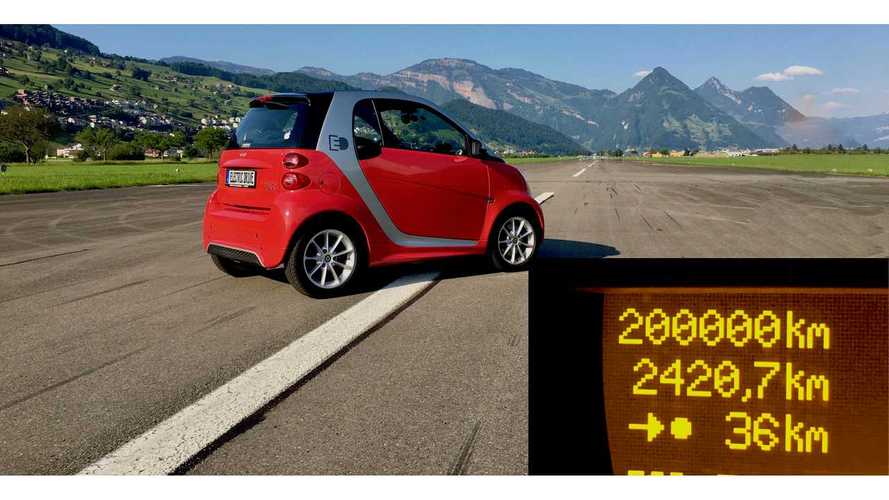 Turns out that not only Teslas maintain high battery capacity after well over 100,000 miles.

In fact, this 2013 Smart ForTwo Electric still has tons of life left. That's despite its tiny battery, which requires very frequent recharging.

InsideEVs fan Moritz Leicht from Germany reached out to us with an amazing Smart story. We'll share the recap down below, but the gist of it is that he loves his electric Smart. Add in the fact that its battery capacity is at 90% of when it was new and that's astonishing.

Here, in Moritz's words, is an overview (full blog post from Moritz can be found here):

I’m Moritz Leicht from Germany and would like to tell you about my smart electric drive from 2013 with the standard 3.7 kW  charger (in Europe there is also a 22 kW charger available). At the end of 2018, we passed the 200,000 km-mark and are now happy the battery still has 90% of its original capacity left.

Here are a few facts about the car:

- 3rd generation smart electric drive
- battery (17,6kWh) by the German Accumotive (Joinventure Daimler & Bosch)
- a realistic range of 100km
- charges at maximum with a speed of 20km/h
- the smart electric drive has a fluid based battery heater and cooler
- motor by EM-motive, same as the Fiat 500e, but limited to 55kW due to the small battery
- went to every 20.000km inspection and never had anything wrong
- the smart is a car and we use it as we want. For example, we drove a few laps in racing speed at the Hockenheimring in Germany
- the battery still has 90% left
- this car changed our life, originally leased just for two years my dad bought it after the two years
- this car made my family go full electric (I switched from the old ED to the new EQ, my brother got the old ED, my Mum drives a Renault Zoe, my Dad got a used Model S 100D)
- still has its first brake discs and shoes
- only thing that was replaced where the tires and all the lights
- we are never ever going to give this car away

Moritz accurately points out too that since the Smart has a tiny battery, it gets recharged often. Therefore, 125,000 miles on the battery is all that much more impressive.

Again, we encourage you to check out the full blog post (originally in German) here.