We Visit Volkswagen's Dresden Factory: Get Inside Scoop On EV Plans 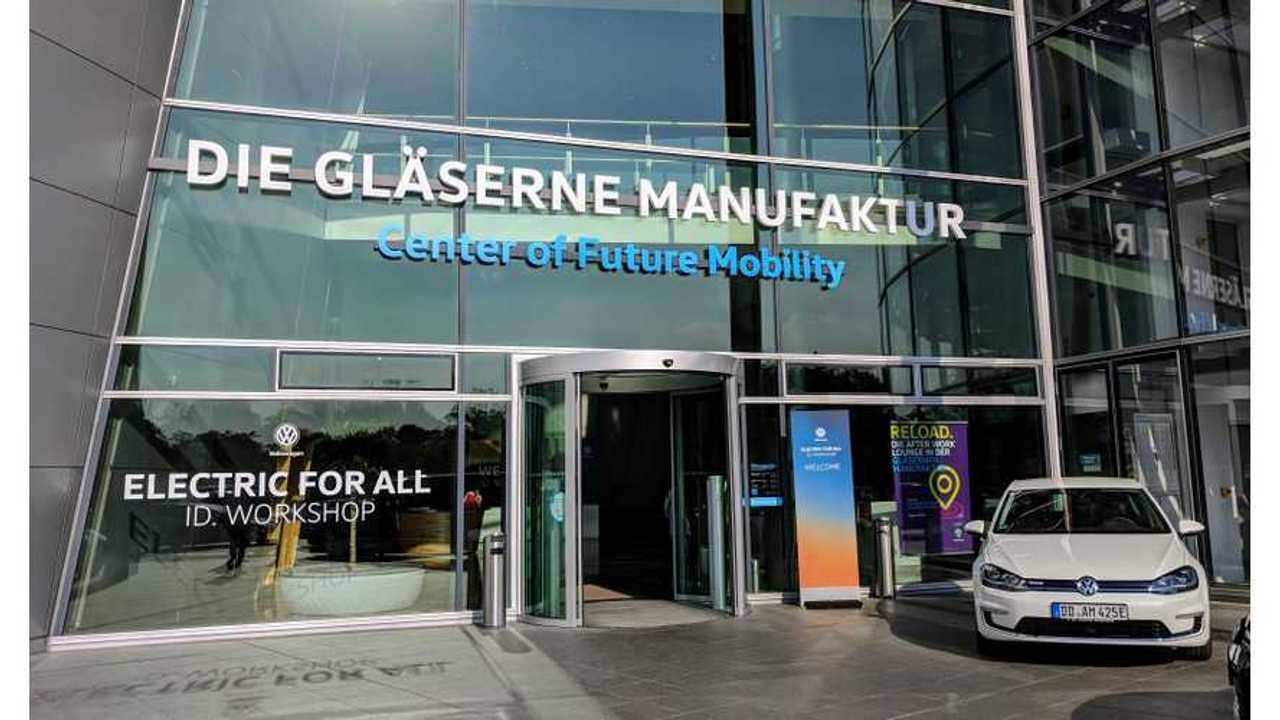 A site so clean and unlike any we've ever seen before.

Volkswagen's "Transparent Factory" located in the center of Dresden, Germany originally opened in 2002, and was responsible for manufacturing the Volkswagen Phaeton until March 2016. It then began a 13-month transformation that would see the Gläserne Manufaktur (Factory made of glass) converted into a facility that would solely make electric cars, the e-Golf to be exact.

A Volkswagen e-Golf moves along the assembly line in Dresden, Germany. The body and drivetrain of the vehicle pictured are about to be mated.

Volkswagen claims that was the first time that any automobile manufacturer converted one of their existing factories from making internal combustion cars to exclusively making electric cars. Today the factory makes 72 cars per day - not exactly high-volume, but this is a small plant, and cannot produce the thousands of cars per day that larger auto plants can. During the workshop we were told that VW's transition to electric cars has become the top priority of the manufacturer. They expect to be the world leader of EVs by 2025, at which time the Volkswagen Group will have 50 different all-electric models for sale.

"The MEB modular electric drive matrix is probably the most important project in Volkswagen's history, similar to the transition from the Beetle to the Golf"

Thomas Ulbrich, Member of the Board of Management, Volkswagen Group

So how does VW plan to scale up its planned electric vehicle production? Simple, they were the first to completely convert an existing plant from ICE to electric, so they're doing it again. However this time it's not a small, low-production plant. This time it's their plant in Zwickau, a factory capable of producing 330,000 cars per year. The transformation will begin in 2019, and be completed in 2020.

Volkswagen's new MEB platform will accomodate a variety of all-electric cars in the coming years.

Volkswagen aims to be producing 100,000 all-electric (BEVs) cars in Zwickau by 2020, and more than 300,000 within a few short years. All of these vehicles will all use Volkswagen's new MEB platform, a skateboard design used exclusively for all-electric vehicles, and will not be employed in PHEVs. Dresden and Zwickau won't be the only VW factories making purely electric cars, though. VW will be building a new factory in North America (site undetermined at this time) dedicated exclusively for EVs, as well as one in China, and adding BEV production in existing factories across Europe. These plants will combine to make 1,000,000 all-electric cars by 2025.

Speaking of 2025, that's the year Volkswagen predicts that they will transition their EVs to solid-state batteries. Until then, they will be using both prismatic and pouch cells, initially from Samsung and LG Chem, but representatives were clear that they may use other sources in future years.

Volkswagen's new slogan is "Electric For All", and during the workshop, they repeatedly reminded us that they are, and have always been "the people's car", and that their goal is to "build electric cars for the millions, not just for millionaires". The plan is to bring electric mobility to the masses, as they did many decades ago with inexpensive, affordable gasoline cars. It seemed pretty clear that they were taking a not-so-veiled shot at Tesla with regards to the cost of their electric cars today.

Volkswagen has already announced the first four EVs to come from the brand using the MEB platform. The first is simply called the I.D, and is a Golf-like hatchback which will launch in late 2019. Next up is the I.D Crozz which is a mid-sized crossover, and will arrive in 2020. Those two vehicles will be followed by the I.D. Vizzion, a full-sized sedan and the I.D. Buzz, an all-electric MPV that looks like a futuristic version of the famed Microbus. Both the Vizzion and Buzz are expected to arrive in 2022.

We learned at the battery workshop that all of these vehicles will have different battery size options. This is made possible by the flexibility of the MEB platform. Volkswagen can add battery modules to the chassis for customers that prefer to have a longer range. The MEB platform allows for battery trays that house 7, 9 and 12 battery modules. The I.D. hatchback, the smallest of the I.D. family, will have battery options between 48 kWh and 62 kWh. The larger cars will have larger packs, and the Vizzion will have battery pack options up to 111 kWh available.

The gel seen in the photo spreads out along the bottom of the module when it is inserted into the battery tray. This improves the performance of the battery management system.

We were also told that Volkswagen gets fully assembled modules delivered to them from the manufacturers, unilke competitors like BMW that get the raw cells delivered, and assemble the modules in-house. The battery packs are actively cooled and heated, with the thermal management system located beneath the floor that houses the modules. When the modules are installed into the battery tray, they are compressed into a gel that spreads across the bottom of the module, and the gel conducts the heat and cooling better than if the modules simply sat in the aluminum battery tray.

Volkswagen has some grand plans for their EV program and is really talking the talk. Only time will tell if they will follow up on these promises, but after spending a day at their EV workshop, from our perspective, they are indeed serious about transitioning the brand and the entire VW Group to EVs. Fifty new all-electric cars by 2025, and every car sold in the Volkswagen group (that includes Audi, Bentley, Bugatti and Lamborghini) will be either electric or offered in an electric form by 2030.

If they do manage to accomplish that, there's a very good chance that they will be the world leader in electric cars a decade from now. However, saying it and doing it sometimes proves to be two different things entirely. We'll give them the benefit of the doubt for now because it really seems like they have turned a corner on electric mobility. However, as with everyone that makes these grand EV promises, we'll be watching very closely, and reporting their progress or lack thereof.

Gallery: We Visit Volkswagen's Dresden Factory: Get Inside Scoop On EV Plans