It wasn't long ago that it seemed Tesla's CPO program was booming. This was especially true when some used models were aggressively priced and those awaiting their Model 3 were having second thoughts.

***Update: It seems Tesla has now "softened" the new language related to its used cars. See the photo below stating 'Mechanically Inspected':

Recently, Daniel Zorrilla, a friend and contributor at InsideEVs, was on the hunt for his next used Tesla Model S. He tracked down models in several locations around the country, and it turned out that everything posted was not refurbished. Additionally, an advisor at Tesla told him that the automaker was going to a new format soon, in which Tesla would no longer list cars prior to refurbishing.

However, it appears now that the company has taken the change a step further. Prior to this change, the automaker listed cars before refurbishing them, then once you put your deposit down, you'd have to wait a few weeks to get the car, because the refurb process took some time.

Now, instead of refurbishing the cars first and then listing them, Tesla is not doing the work at all. The cars are listed with a disclaimer saying just that. So, you can purchase and take delivery fairly quickly, but if you want anything extra done, you have to pay for it. 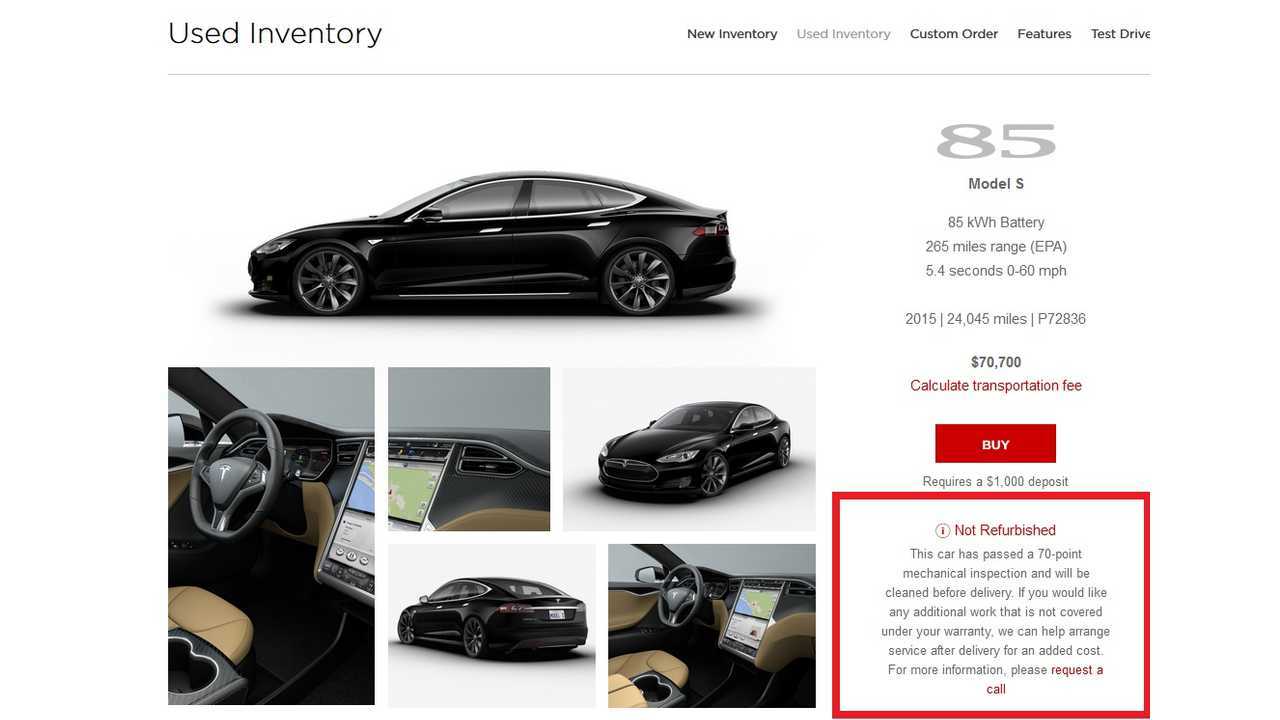 That seems to have happened already because on my prior CPO purchase, I put a deposit down, and it wasn’t ready to pick up for weeks while Tesla reconditioned it. I put a deposit down last week on a Tesla certified Model S. A Tesla Sales Advisor called me the next day and asked me when I could pick the car up. When I asked the Sales Advisor, he said that Tesla didn’t list them prior to being reconditioned anymore, and waited until they were reconditioned to list them.

Based on what I’ve seen today, this seems like another step - Tesla selling cars that are just inspected, but not reconditioned.

He explained a little more background for us, from his past experience and understanding of the situation:

They do a great job reconditioning the cars, they’re like new when you get them, but it seems like Tesla spend thousands reconditioning them. Even if they buy cheap and sell high, they can’t be making much off the secondhand market from what I’ve seen. Especially when they have to provide an extended warranty on top of it. Going from a 4-year/50k warranty to 2-year warranty last year further shows they’re trying to make it more profitable.

Good for profitability, bad for CPO buyers and Tesla setting its used cars apart from the competition.

This is not to say that the cars aren't certified. According to Tesla, they still undergo a 70-point inspection and cleaning prior to delivery.

Following the link below will take you to a Tesla Motors Club forum thread with more information about the matter. Also, the second link is a Tesla CPO buyer's story about his experience with the new program.