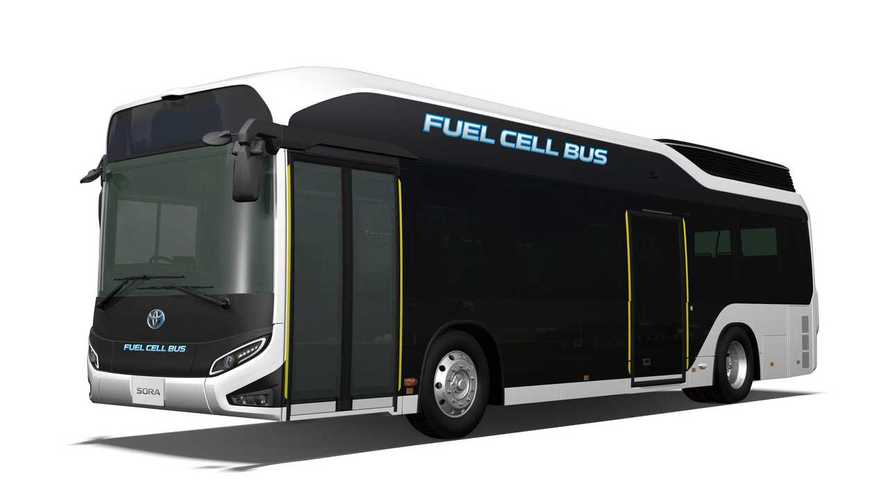 Toyota began in Japan production and sales of hydrogen fuel cell buses called Sora that share technology with the Mirai.

As in case with other FCVs, production volume is very small and Toyota announced that just over 100 units will be delivered in the Tokyo metropolitan area by 2020 for the Olympic Games.

Sora is equipped with two FC stacks - 114 kW each that provide electricity for the two 113 kW AC synchronous electric motors. For the small drive battery, Toyota is still using NiMH.

Range on the 10 tanks of hydrogen (600 liters working at 70 MPa nominal pressure) is probably comparable to conventional buses.

An interesting emergency feature is the external power supply system - there is a special inverter, connected to the vehicle through the CHAdeMO, that provides up to 9 kW of power (it can deliver up to 235 kWh, which sounds like a day or two of juice, depending on usage).

Will this type of bus be a viable solution for mass transport? We doubt it.

Toyota expects to introduce over 100 fuel cell buses, mainly within the Tokyo metropolitan area, ahead of the Olympic and Paralympic Games Tokyo 2020. As the number of FC buses in operation within the metropolitan area increases, Toyota anticipates greater awareness of the vehicle among the general public.

Last year, Toyota launched the "Start Your Impossible" global corporate initiative to transform the company from an automobile company to a mobility service company. This was guided by the company's desire to contribute to the improvement and enhancement of customers' lives and society as a whole through support of the creation of a more inclusive and sustainable society in which everyone feels inspired to challenge his or her impossible. In developing the Sora, Toyota has sought to design buses that provide customers with freedom of mobility and become enduring town icons.

Toyota aims to create a bus that works for and supports society, so the Toyota Fuel Cell System (TFCS) has been leveraged in the Sora for its environmental friendliness and ability to serve as a power source in the event of a disaster. The Sora features human-centric universal design and functions, reflecting Toyota's desire that when riding the Sora, mobility no longer presents an impediment to customers challenging the impossible, which helps enable them to achieve their dreams.

*2The power that can be supplied and the power amount may differ, depending on the performance of the power supply unit, amount of hydrogen remaining, and power consumption. External power output device sold separately.

*3As of March 28 (according to Toyota Motor Corporation).