Elon Musk Is On The Cover Of Rolling Stone, Discusses Tesla Semi 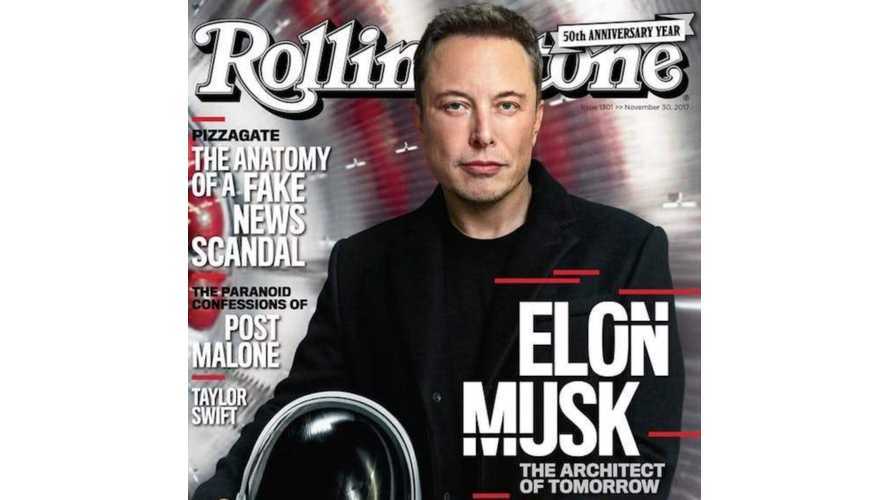 In a wide-ranging interview with Rolling Stone's Neil Strauss, Musk talks about space, tunnels, family, love, loss, and... of course, Tesla. It's a deeply personal story about Elon Musk — seldom uncovered (by any journalist) since Bloomberg's Ashley Vance tackled his biography back in 2015. In any event, Musk's comments on Tesla were revealing.

During the interview, Strauss gets a sneak peek of the new semi truck at Tesla's Design Studio along with Tesla's executive team, including Doug Field, JB Straubel, Jerome Guillen, and Franz von Holzhausen. Guillen explains, "We just thought, 'What do people want? They want reliability. They want the lowest cost. And they want driver comfort.' So we reimagined the truck." Musk adds, "... if you're going to make a product, make it beautiful. Even if it doesn't affect sales, I want it to be beautiful."

Above: A teaser for the new Tesla semi truck (Twitter: Tesla)

But, it's not just beautiful cars (and trucks) he's after, Musk wants to build a better future. When asked to define 'better', he elaborates: "It would be better if we mitigated the effects of global warming and had cleaner air in our cities and weren't drilling for vast amounts of coal, oil and gas in parts of the world that are problematic and will run out anyway."

Musk continues, "The fundamental intention of Tesla, at least my motivation, was to accelerate the advent of sustainable energy. That's why I open-sourced the patents. It's the only way to transition to sustainable energy better. Climate change is the biggest threat that humanity faces this century, except for AI. I keep telling people this. I hate to be Cassandra here, but it's all fun and games until somebody loses a f**king eye. This view is shared by almost everyone who's not crazy in the scientific community."

Musk doesn't just fight against the climate deniers, he's often fighting Wall Street's short sellers too. Musk admits, "I wish we could be private with Tesla. It actually makes us less efficient to be a public company." Musk's animosity towards those who short Tesla stock is unmistakable, he calls them out: "They're jerks who want us to die. They're constantly trying to make up false rumors and amplify any negative rumors. It's a really big incentive to lie and attack my integrity. It's really awful. It's... hurtful."

Regardless of Musk's success, as Strauss explains, "He's probably the only person who has started four billion-dollar companies – PayPal, Tesla, SpaceX and SolarCity," the shorts still choose to bet against Tesla. Musk reminisces, "I was literally told this is impossible and I'm a huge liar," he says of the early days of Tesla. "But I have a car and you can drive it. This is not like a frigging unicorn. It's real. Go for a drive. It's amazing. How can you be in denial?"

Although Musk's detractors are usually proven wrong, Strauss notes, "one thing Musk is notorious for is setting ambitious deadlines that he often can't meet. The Roadster, the Model S and the Model X were all delayed from his original timeline." Musk's timeline management isn't his strong suit and when asked about Model 3's production delay, Musk advises, "Better to do something good and be late than bad and be early." Strauss concludes, "expect Musk to get it done, just not on time. Because if he can't do it, he won't pretend otherwise."