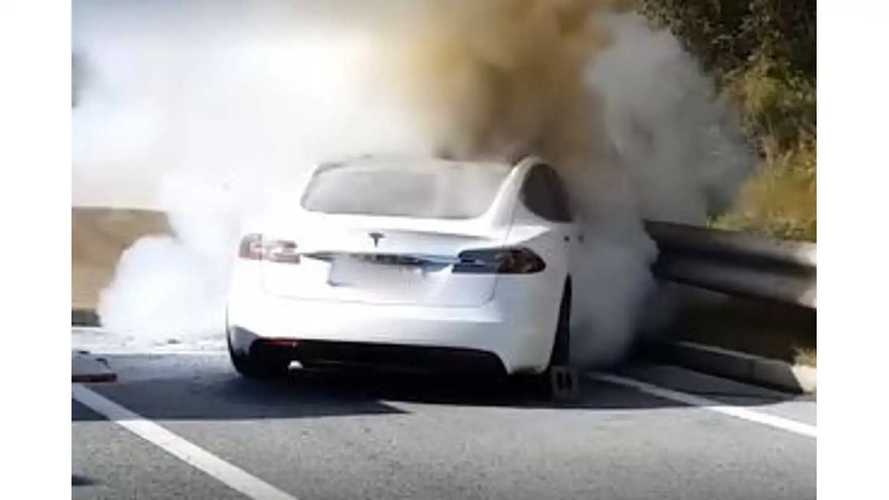 Electric car fires, though rare, do typically require a lot of hands on deck and tons of water to extinguish.

What your'e witnessing above is the aftermath of a crash of a Tesla Model S into a cement barrier. The driver, a 19-year-old Austrian, had ample time to escape from the wreckage before it caught fire.

The video above shows the work of a volunteer firefighting team. After extinguishing the fire, the team, known as Feuerwehr-Landeck, issued a press release. In part, it reads (via Google Translate):

"The fire fighting - which could only be carried out under severe respiratory protection - was difficult because the vehicle was repeatedly on fire. It was only after cutting the power supply from the high-performance batteries that it was possible to finally fight the fire. Since lithium batteries are used, the manufacturer recommends that the vehicle be parked under “quarantine” for 48 hours, so that no new fire can break out."

The proper method for extinguishing a lithium fire is to use massive amounts of water, followed by more water and then even more water. Once controlled, the next step is to use thermal imaging to see if hot spots still exist. After that, the vehicle should be put under close watch for a time just in case thermal runaway reignites a blaze.

You'll also see that the firefighters are cutting into the the door jamb on the driver's side rear door. This is the location for one of the vehicle's two high-voltage disconnect loops. The main loop is located in the frunk region and is clearly inaccessible after this crash and resulting fire.

All told, the firefighters seemed to know exactly what they were doing and handled the blaze as Tesla tells them to in the vehicles' emergency responder's guide.