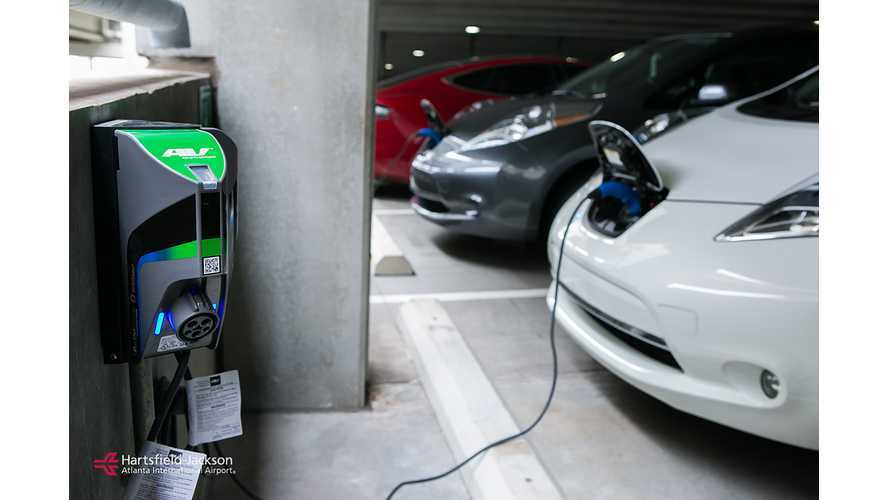 The Hartsfield-Jackson Atlanta International Airport (ATL) has made its bid to be considered one of the greenest airports in the world (if that could be a thing) with the installation of 102 charging stations.

The Charging stations will be located in several parking structures along the ATL airport perimeter.

"The installation of AeroVironment TurboDock charging stations is the most recent effort by the City of Atlanta and the Hartsfield-Jackson Atlanta International Airport to turn ATL into one of the greenest airports in the world.

AeroVironment TurboDock is designed for commercial applications like those found in Atlanta and other fast growing EV markets. Out of the box, TurboDock charges at either Level 1 (12 amps/120 volts), or at Level 2 (16 amps/240 volts). TurboDock is easy-to-use, flexible, offers low cost installation and features innovative access control using Bluetooth and a smartphone app, with none of the recurring monthly cellular fees associated with other networked chargers. The configurable, modular design allows for maximum installation flexibility.

TurboDock chargers offer power level and charging configurations appropriate for Airport applications. Having power flexibility allows for more charging ports for a given budget or available power capacity. Drivers parking their cars at airports and other transit locations prefer a larger number of low power charging ports, rather than a smaller number of high power ports, since their cars typically remain parked for longer periods of time."

“Atlanta International Airport has set out to become one of the greenest airports in the world, and AeroVironment will help ATL and its guests support that goal with our TurboDock EV charging systems. TurboDock is one of the easiest-to-use and most cost-effective charging stations available. Packed with features specifically designed to make it ideal for airports, including modular charging configurations, 120V capability and mobile app based access control, TurboDock helps EV drivers proceed with certainty.”