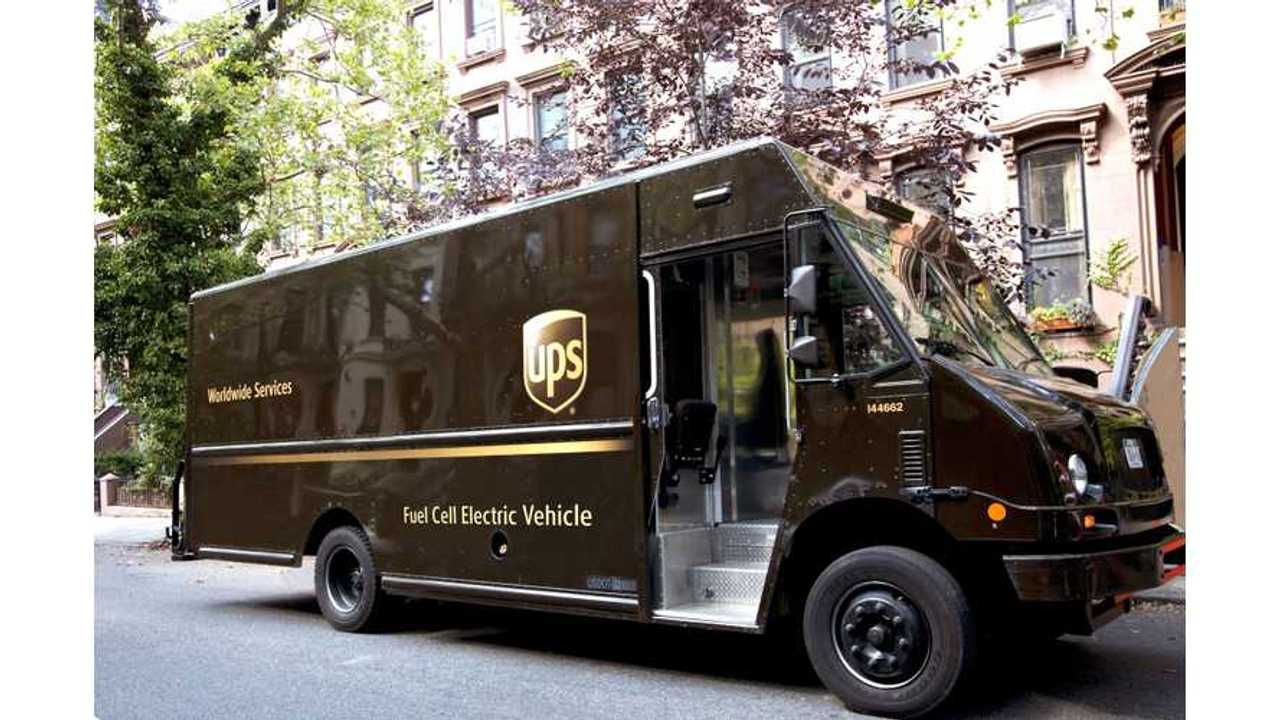 UPS has announced the upcoming deployment of a special Class 6 medium-duty delivery truck prototype, that will be tested in Sacramento, California.

The vehicle is equipped with a 45 kWh battery and also a 32 kW fuel cell range extender (plus 10 kg of hydrogen).

It's one of those rare occasions when we see FCV technology coupled with a battery of that size.

Extended range of the truck is said to be about 125 miles.

Besides the battery-fuel cell combination, what is also interesting is the electric motor - switch reluctance type, supplied by Nidec.

"UPS is working with the U.S. Department of Energy (DOE) and other partners to design a first-of-its-kind, zero tailpipe emissions, Class 6 medium-duty delivery truck that meets the same route and range requirements of UPS’s existing conventional fuel vehicles.

Unlike fuel cell auxiliary power units, this vehicle will use the onboard fuel cell to generate electricity to propel the vehicle. This project is an important step toward demonstrating the commercial viability of zero tailpipe emissions trucks to fleet operators and the developing FCEV supply chain.

The first FCEV prototype will be deployed in Sacramento, Calif., where UPS will validate its design and core performance requirements by testing it on the street starting the third quarter of 2017. Current project plans call for additional UPS trucks to be validated with at least 5,000 hours of in-service operational performance. All of the trucks will be deployed in California due to that state’s ongoing investment in zero tailpipe emissions transportation and installment of hydrogen fueling stations around the state."

"Each FCEV produces electricity which continuously charges the batteries, thereby providing additional power and an extended range of 125 miles. The UPS trucks are equipped with a 32kW fuel cell coupled to 45kWh of battery storage and 10kg of hydrogen fuel. The drive train runs on electricity supplied by batteries. Unlike other fuel cell applications, this will support the full duty cycle of the truck, including highway driving.

The project is part of a fuel cell project grant awarded by DOE in 2013 focused on verifying the proof of concept in commercial delivery vehicles. UPS is committed to evaluating these technologies that support the nation’s energy security, fuel diversity, and economic growth priorities. The project calls for retrofitting conventional fuel trucks with fuel cell electric systems designed specifically for use in a delivery truck duty cycle. UPS is partnering with the Center for Transportation and the Environment as well as Unique Electric Solutions LLC and the University of Texas’ Center for Electromechanics.

UPS has invested more than $750 million in alternative fuel and advanced technology vehicles and fueling stations globally since 2009. UPS has deployed more than 8,300 vehicles using its Rolling Laboratory approach to determine what works best in each situation. From old-fashioned pedal power and electric-assisted bicycles in dense urban areas to electric, hybrid electric, natural gas, renewable natural gas, propane and renewable diesel fueled vehicles, UPS puts sustainability innovation into action all over the world."

“The challenge we face with fuel cell technology is to ensure the design can meet the unique operational demands of our delivery vehicles on a commercial scale.

This project is an essential step to test the zero tailpipe emissions technology and vehicle on the road for UPS and the transportation industry. We have a long history of developing and promoting the use of more sustainable alternative fuels with our Rolling Laboratory, and hope that by bringing our unique expertise to the development of hydrogen fuels, we can help advance the technology.”