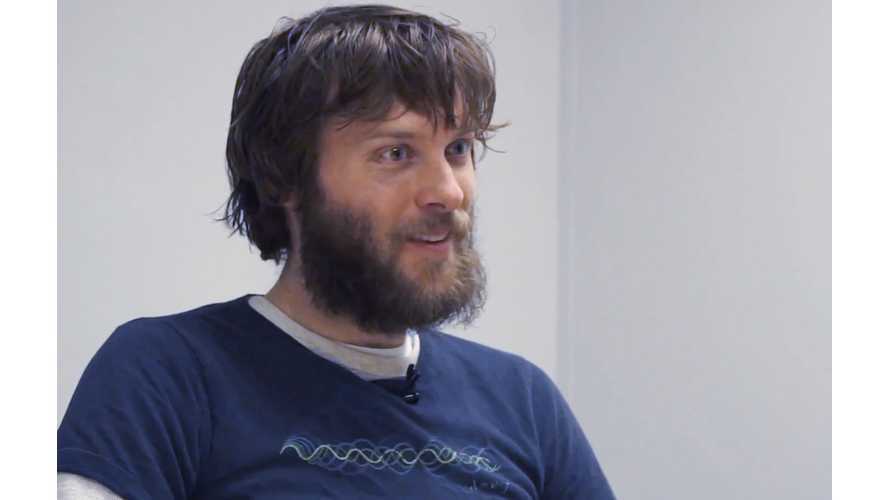 Much has been made of the recent story on Motocycle.com interviewing Luke Workman, "battery guy" at Zero Motorcycles.  Before we go any further, there's not much you can say about Luke, (AKA liveforphysics on the forums and almost everywhere on the web) that isn't amazing and complimentary.  He's been at the very forefront of this EV stuff for a really, really long time, and if you can say he's busted into the public domain, it would be with his "Death Bike" in it's various incarnations.  See it wiping the floor with a Tesla here.

Here's some fun.  None other than the legendary Cedric Lynch on an early version of the "Death Bike" from Luke's YouTube page.

Cedric Lynch, of Lynch and Agni motor fame, taking a spin on the Death Bike

Also, let's not miss the point that this interview appears on Motorcycle.com.  Mainstream, non-EV-centric, gas-burnin' motorsports audience.  So it's bringing the love to the people, there's no denying it.

That said, there's a bit of that video we feel the need to clarify.

In the early minutes of the interview, Luke talks about where batteries were when he started at Zero, and his work to improve the Zero pack.  What he says there is this: "...in my first iteration, we went up by a factor of something like over 2x...", and goes on for another "2x".

What he doesn't say is that battery chemistry work made some serious leaps in that time, with Zero starting that period with the Molicel pack made up of cylindrical cells hot-glued together, to the current Farasis NMC packs built from large pouch cells - which, for the record, Brammo is using as well.  Workman's accomplishment, as he goes on to explain, was to reconfigure the packing of these new cells to take best advantage of the space available, as well as beefing up the strength and sealing of the pack.  "...our battery design...  it's the highest percentage of cells, there's the least amount of dead space and weight to support this given amount of cells."  And he's done an amazing job, along with the rest of the Zero team.

He also went on to talk about the future of battery technology.  Unfortunately, his comments have been latched onto by a lot of the EV, as well as general motorsports community as a prophecy of "Things to Come" from "the battery guru".  We're taking his comments with a hefty grain of salt, and as some speculation and hopes from a guy who's committed his heart and soul to this technology, but not without a fair degree of wishful thinking.

Here's what we're talking about.

As we've discussed, there are a whole bunch of factors to consider when talking about battery tech, and certainly, energy to volume and energy to weight are two very important factors, especially in a motorcycle.  However, there's also the big one - power to weight.  There's also safety, reliability, and more mundane factors like manufacturing processes required, reliable supply lines, oh, and the big one, cost.  Just to throw out one example, A123 cells and chemistry pretty much check everything else out there into the cheap seats on just about every metric...  except cost, because of several factors, not the least of which is the required manufacturing process.  Are you wondering why these cells aren't being run in the Zero?  Look no further than that, for at least a hint.  Here's a graphic we presented once before, comparing only a few metrics:

Meanwhile, our go-to source for the last word on the current state of battery development and EV applications?  Well, we love Luke's enthusiasm, but we started with none other than Elon Musk, talking at MIT about the Gigafactory, battery development, and the weekly newsfeed of "miracle batteries".  We ended up at "The Powerhouse", a look in the trenches of the "battery wars".  Read more about that book here, and hear Musk's comments in this video:

So, Luke's comments of "...'thousand mile charge electric motorcycles" as a "normal thing"?  Maybe in the same time frame as making it to Mars, but "...a few years from now"?  We're not betting the farm on that one, sorry.  As far as "...a lady with ... working, solid state, laminated film battery cells..." Well, just be sure to include the comment "...or at least she's claimed, I haven't been able to get a sample yet..." and we're pretty much on the same page.