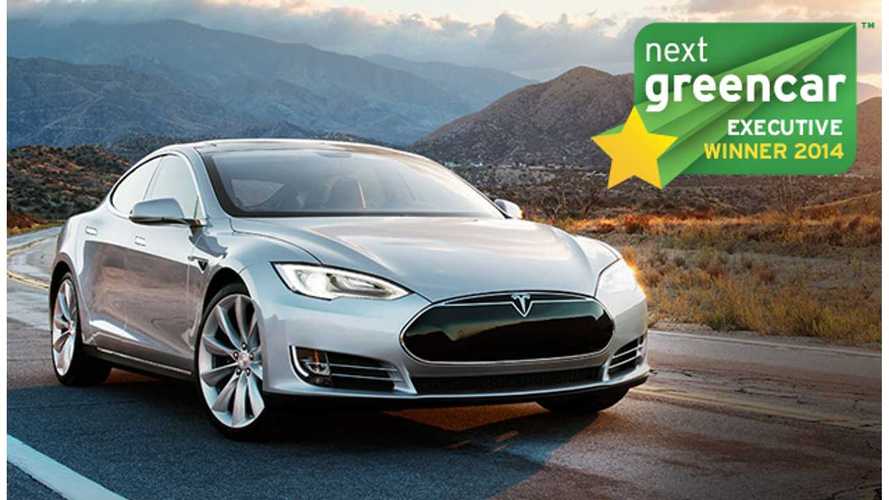 Next Green Car, which calls itself the UK's #1 green car website, recently announced the winners of the Next Green Car Awards 2014.

As it turns out, 6 out of 11 categories fell prey to plug-in vehicles, while in three others BEVs/PHEVs were commended.

"The 2014 winners reflect three key green car developments: the electrification of the drive-train (including fully electric vehicles and plug-in hybrids), the continuing improvements in fuel efficiency (for all fuels), and the realisation that petrols may have the environmental edge over diesels for urban use."

"While all the winners and commended entries are highly innovative in the power-train technologies they employ, they also share the objective of wanting to improve the driver experience. In the coming years, ergonomics is set to become as important as engineering in the drive to design green and efficient vehicles."

The winners and commended entries of the Next Car Awards 2014 are as follows:

"We're delighted to have won this award from Next Green Car. The e-up! combines all the features which have made the standard up! so popular - compact body with impressive interior space and big car levels of comfort and refinement - with an all-electric drive-train. A range of up to 99 miles and a choice of charging options mean its a great choice for commuters. The e-up! was our first all-electric car and we hope its success in these awards will be repeated by our e-Golf as well as the Golf and Passat GTE PHEVs when they are available next year."

NGC verdict: "The new Corsa is value for money all round; its impressive new three-cylinder engine providing excellent drivability with emissions well below the zero car-tax threshold."

NGC verdict: "Well done to Ford for bringing its hybrid know-how to the UK market. Helped by its EcoBoost engine, the Mondeo Hybrid delivers emissions just under the 100g CO2/km threshold."

NGC verdict: "With its distinctive looks, the Citroen C4 Cactus will get you noticed. It's also a pleasure to drive, is zero car-tax rated and is the most fuel frugal car in its class."

"The five-door A3 Sportback is already widely lauded for its all-round practicality and ample space. Now our groundbreaking new e-tron model - the first ever series production plug-in hybrid from Audi - builds on this winning formula with astounding efficiency, versatility and zero-emissions potential. It is the ideal candidate for family life and we're delighted to receive such high praise from the judges at Next Green Car reflecting this."

NGC verdict: "The Outlander PHEV sets the SUV bar high offering plug-in capability for the price of a diesel. With a 5% BIK rate, you can see why the Outlander is the UK's most popular plug-in hybrid."

"We are delighted with our achievement in the Next Green Car awards. The Outlander plug-in continues its sales success. It may well prove to be the tipping point in ultra-low emission vehicle adoption."

NGC verdict: "Simply the most beautiful and technologically advanced electric car on the market, the Model S combines a gadget-packed interior with an exhilarating electric driving experience."

"Model S has been taking the UK by storm since its launch in June, with Tesla's presence growing to include stores and service centres in more locations and Supercharger routes to travel the length and breadth of the country and into Europe. We are delighted to have won the Executive Car title in the Next Green Car Awards 2014."

NGC verdict: "With the e-NV200, Nissan has broken new ground offering an affordable and practical zero-emission alternative to the ubiquitous diesel van."

"We are absolutely thrilled to have won this award as it's based on scientific fact. Both the award and the impressive Green Car Rating given to the e-NV200 are a ringing endorsement of the model's impressive environmental credentials. Combine that with levels of versatility, durability and all-round performance that are more than a match for any other van of this size and low running and whole-life costs and it's easy to see how the Nissan e-NV200 has the potential to redefine the LCV market."

NGC verdict: "Powered by Tesla know-how, the Mercedes electric B-Class brings electric mobility to the compact MPV class for the first time. High on quality, long on range, and zero on emissions."

"The B-Class Electric Drive is our first volume production electric vehicle and it's great for it to have won an award before it even reaches the UK. It's practical, it's ideal for families and it features all the very latest comfort, safety and entertainment technologies. The B-Class Electric Drive just happens to emit no emissions, be highly efficient and capable of travelling up 125-miles on a single charge."

Noteworthy is that Toyota Mirai FCV was commended.