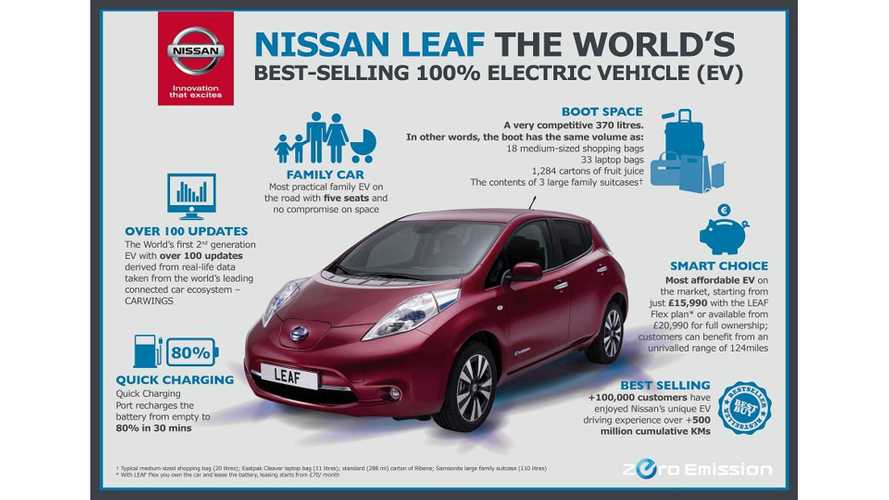 Judging by our inbox at InsideEVs, Nissan really wants the world to know they lead the UK in electric vehicle sales in January of 2014 (we got 3 separate notes about it).

So, being the good foot soldiers we are, we are passing along that news - well, that and because they made a fancy new infographic  about the Nissan LEAF (appears below) that we thought was kinda swell.

For January, Nissan sold 230 all-electric LEAFs in the UK, which actually is an impressive result - as the first month of the year is always the toughest to move product, and last year the company managed to only sell a little over 1,800 copies.

Also of note: 2nd place for plug-ins in the UK for 2013 was the Toyota Prius PHV - miles behind at around 500.  For the calendar year Nissan accounted for just under half of all plug-ins sold.   In other words, it's wicked hard to sell electric cars in Britain.  Competition from Tesla begins in March with the Model S.

It is easy to see how much Nissan cares about the UK market (besides our email bombing), as the company set up the LEAF's third manufacturing facility in Sunderland last year... and the fact they also decided to promote sale number 100,000 of the EV there as well.

Obligatory Nissan quotage can be found below:

Being Introduced On The BBC This Year

"Momentum around the Nissan LEAF is growing with each passing month and that trend only looks like continuing," said Jim Wright, Managing Director at Nissan Motor GB. "When we launched the LEAF we were the first manufacturer to bring an all-electric vehicle to market that was both practical and affordable and the success of the LEAF demonstrates we were right to do so."

"Now other manufacturers are trying to play catch-up by bringing their own electric models to market, but the fact that we've kicked-off the new year as the leader of the pack puts us in a great position for the year ahead."