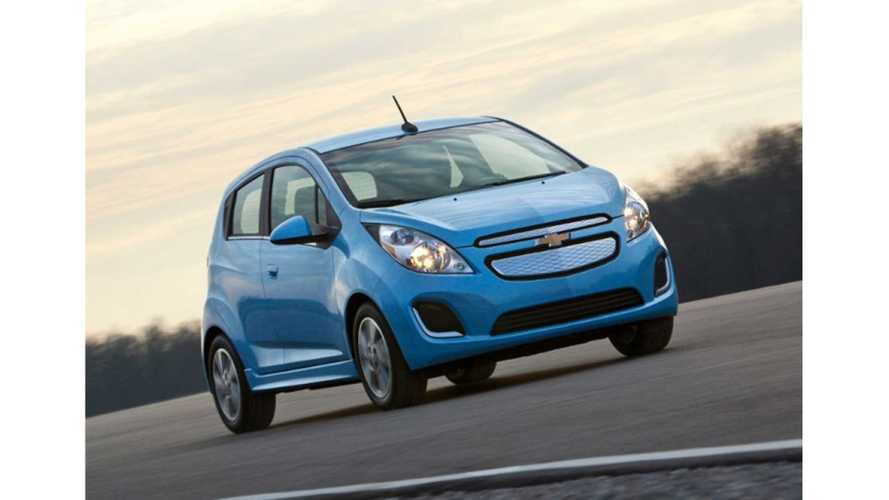 The official figures for the 2014 Chevy Spark EV are finally here and, for General Motors' first pure electric vehicle since the EV1, the numbers are mighty impressive.

General Motors additionally points out that owners of the 2014 Chevy Spark EV will save up to $9,000 in "fuel" costs over 5 years and notes that the electric Spark is the "most efficient US retail electric vehicle" available today.

"Being able to provide our customers with the best overall efficiency of any retail EV has always been a key target for the Spark EV engineering team.  We’re poised to deliver to the market an EV that’s not just efficient, but also thrilling to drive thanks to the 400 lb-ft torque output of its electric motor."

The 2014 Chevy Spark EV will launch in the US in late July in both California and Oregon.

Its MSRP has not been finalized at this point in time, but we do know that its after-incentive price will be below $25,000.

Other known specs for the 2014 Chevy Spark EV include its battery size of 21 kWh and that its electric motor pumps out 130 horsepower, which allows the Spark to zip from 0 to 60 mph in less than 8 seconds.  Additionally, the Spark EV will be the first electric vehicle ever offered with the SAE's combo charger for DC quick charging.  However, that will be an optional extra, says GM.

With the EPA figures out there, are you now more inclined to consider the Spark EV, even though it'll only initially be offered in 2 US states?  What'll take to convince GM to offer this EV on the nationwide level?