Elon Musk’s dream for the Model 3 may start to be fulfilled with the Model Y.

The video above has the goal of proving how people that bet against Tesla lost. It did not even mention the 1,000,000th car Tesla produced on March 10, 2020. Anyway, we consider it meaningful for a reason that may seem secondary: remembering Elon Musk once dreamed of a fully automated production line. We have strong signs that the Model Y may have been conceived with that goal in mind.

Gallery: New Tesla Wiring System Promises To Cause A Revolution

Although “humans are underrated,” as Muks once said, he probably still wants to reduce the human component in vehicle production. That would make production more predictable, repeatable, and reasonably more reliable.

Imagine a factory that only needed a few people to work. Would it be affected by a coronavirus outbreak? Probably only at getting the necessary parts from suppliers. Would there be concerns with unions, labor injuries, or stress? That is what the Tesla CEO possibly wanted to avoid, along with achieving productivity gains.

Elon Musk learned the hard way that mass production was tough. Munro & Associates showed him the Model 3 body was way more complicated than it should be. When he realized that, he probably noticed it would not be possible to reach the level of automation he wanted with that vehicle. However, Tesla could create one that would do the trick.

The Model Y has elements that point to a less complex manufacturing process. The main one is its new electric architecture, with the least number of wiring harnesses a modern vehicle has ever presented.

Only a human worker can currently get complicated harnesses all around the car. If the assembly process is simplified, a machine can do it. Check what the patent for the new electric architecture said:

Traditional car wiring for vehicles is piecemeal solutions. Typically, there are different wiring harnesses that connect each different electrical component to a central battery or power source. Each component receives power but requires multiple wiring harnesses for communication and signals. The total length of the wire may be many miles within a single vehicle. These wiring harnesses typically consist of multiple round conductors that are not rigid. Round conductors are not optimal for transmitting current and the lack of rigidity of traditional wiring harnesses requires assembly into the vehicle using human hands, which can be a slow process. Further, connecting each component to the central battery is not optimized on an automobile level.

Hence, there is a need for wires and a wiring-system architecture that overcomes the aforementioned drawbacks.

We still need an explanation of that new architecture but, if Tesla managed to accomplish what the patent proposed, it would at least cut a lot of time on the assembly lines, with fewer people required to perform it. In the best-case scenario, robots will be able to do it. 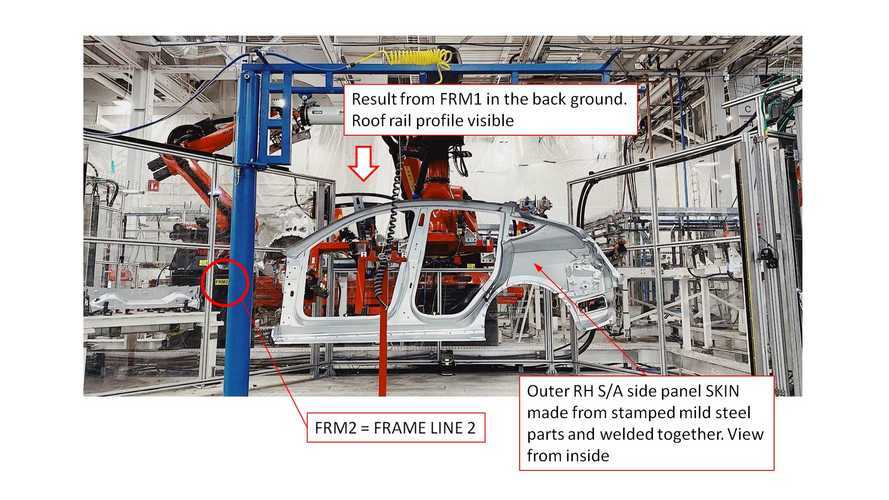 The other point in making assembly more straightforward is the use of die-cast parts. We also discovered that with patents and had the precious help of multiple specialists in learning more about it.

Curiously, this is precisely one of the main criticisms Sandy Munro had about the Model 3 body. The car had 40 percent more parts than other vehicles, which made it heavier than the competition. The less weight an electric vehicle presents, the more range it can get. Check the video below with his interview to Sean Mitchell exactly at the point in which he mentions that:

Did you realize this is one of the main die-cast parts the Model Y will have? As Munro suggested, Musk now has a single part for the wheel wells, but it is not stamped: it is cast. If robots can extract the cast components, check them, and put them on the assembly line, “alien dreadnought” is one step closer to becoming a reality.

We’ll probably not see that happen with the Model Y, as the picture of the 1,000,000th Tesla surrounded by workers tells us. That does not mean it will not be the stepping stone for future images with much fewer people or even only robots around the cars.