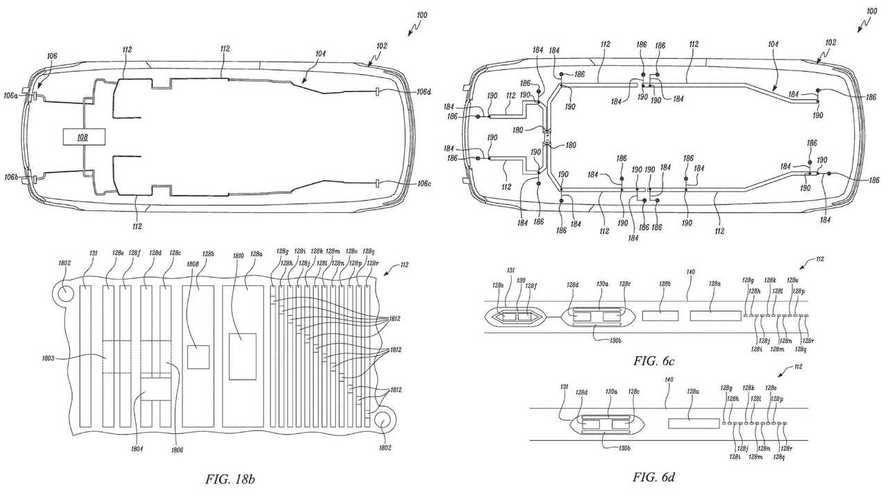 It could not only be assembled by robots: it can also drastically reduce weight.

Sometimes people get to ask a very simple question: “Why do we do this in this way?” When Tesla does it, we often see amazing results. Such as this, which has to do with car wiring architecture. In search of a simpler way to assemble them, Tesla may have made a revolution.

The patent application per se just shows Tesla’s goals with the new system. And they are the best explanation possible for it:

Traditional car wiring for vehicles is piecemeal solutions. Typically, there are different wiring harnesses that connect each different electrical component to a central battery or power source. Each component receives power but requires multiple wiring harnesses for communication and signals. The total length of the wire may be many miles within a single vehicle. These wiring harnesses typically consist of multiple round conductors that are not rigid. Round conductors are not optimal for transmitting current and the lack of rigidity of traditional wiring harnesses requires assembly into the vehicle using human hands, which can be a slow process. Further, connecting each component to the central battery is not optimized on an automobile level.

Hence, there is a need for wires and a wiring-system architecture that overcomes the aforementioned drawbacks.

The first criticism of traditional car wiring is spot on. The first electric systems in the car have been added due to the need for lighting, air conditioning, power windows and so forth. The more equipment people demanded the more wires were added, probably without any planning. Even because analogic systems did not offer many options. With time, that lead to a pile of harnesses all around the car.

As Tesla puts it, there can be miles of wires in a single car. And these wires add a lot of weight and complexity to the car. A first attempt to beat that was multiplexing, with the use of simple electronic modules to deal with some of these items.

The problem with early attempts was the response speed, with noticeable delays. You'd press the honk button and wait anxiously for it to make any sound. And we still have cars with heavy harnesses around.

Tesla goes on describing the technical details of the new wiring system – which are publicly available at the patents office – and makes the following conclusion:

This new architecture reduces the number and length of cables and moves certain controllers into subassemblies which then control one or multiple devices present in the vehicle. To achieve power and signal transmission, new cables and connectors have been created and described herein.

In this new wiring architecture, subsystems are packaged and defined in one or multiple assemblies in certain embodiments. For example, a door assembly might contain one controller (or hub) that controls multiple devices, such as locking components, lighting components, audio components, etc. In addition to decreasing the number and length of wiring needed, the ability to create these subassemblies and then connect them to the wiring-architecture backbone will decrease assembly time during general assembly, which is very desirable to increase productivity in a vehicle manufacturing process. The subassembly may be created ahead of general assembly with only the connection between the door subassembly and subsystem made and verified during general assembly.

While Tesla's main goal is to probably have robots make this assembly, the biggest gain relates to less complexity and less mass for the car. Elektrek revealed the patent application and brings info we have not found in it.

The article claims Elon Musk once said the Model S had about 2 miles (3 km) of wires, while the Model 3 had half that amount. Or around 1 mile of wires (1.5 km).

The new system would help Tesla bring the wiring needs to just circa 328 ft (100 m). Just imagine getting rid of 93.3 percent of all wires you need in a vehicle all of a sudden...

If that is correct, all carmakers will want to have a piece of that cake. It represents a scale economy of billions of dollars. Tesla could live with no worries just on its wire-system architecture royalties. It is just massive – ironically reducing weight to an incredible extent.

If this info is confirmed – and the new system helps Tesla reach its goals with it – that will make us all wonder: “Why has no one ever asked why they do harnesses this way?” Mainstream automakers will not only wonder. They’ll probably regret not having done so.

Gallery: New Tesla Wiring System Promises To Cause A Revolution