Porsche Taycan Fire Emphasizes The Ugly Side Of The EV World 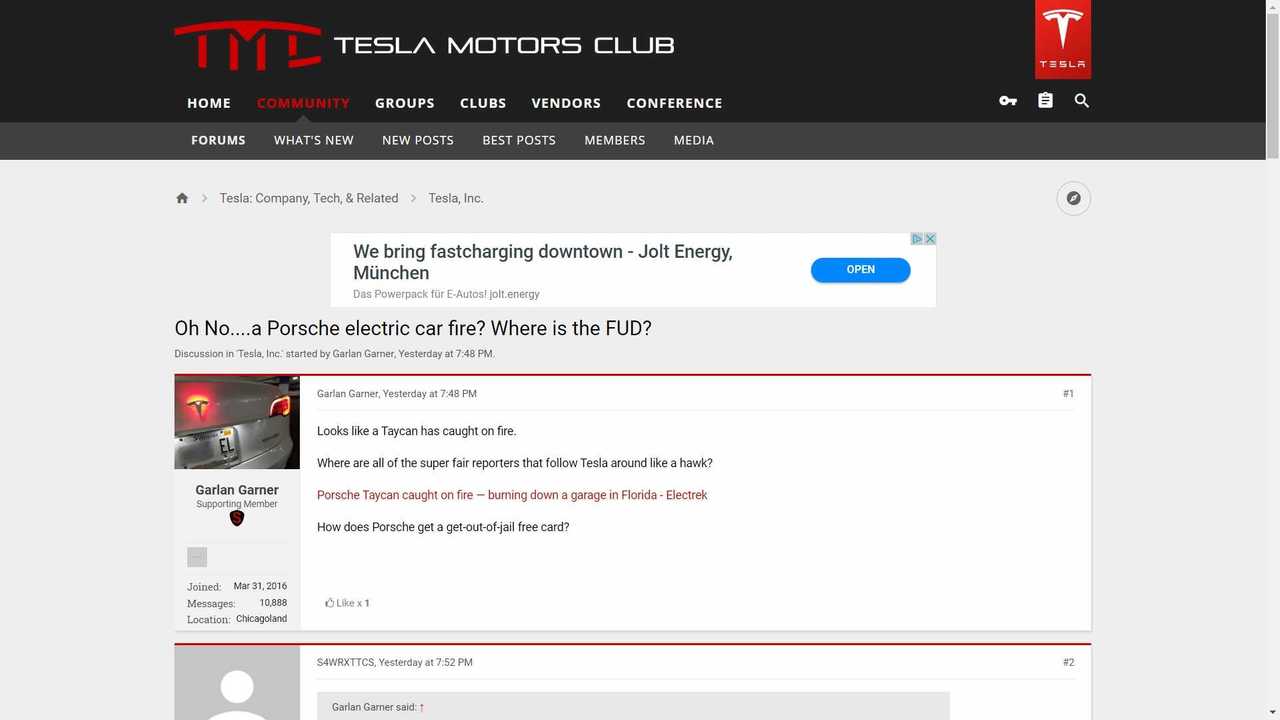 Tesla fans seemed to celebrate the bad luck an EV adopter like them had, only with a different brand.

A Porsche Taycan burned down in South Florida last February 16. The car was certainly brand-new, and the garage in which it was sitting will have to be rebuilt. That would be more than enough for anyone to sympathize with the owner, even a die-hard fan of combustion engines. Yet, that episode emphasized the ugly side of the EV world: organized fan clubs, or the "mine-is-better-than-yours" teams.

Gallery: One Of The First Porsche Taycan Burns Down In South Florida

I was still researching to find out more about what happened and waiting for Porsche to officially say something when my searches led me to some forum threads commenting on the issue. Tesla forums such as TMC and the official one from Tesla had threads asking why there was nothing on the media about the fire. While it may seem they were as intrigued as I was on why not even local news reported this, their comments made it clear that it was not their point.

Most forum members seemed to take joy in that fire. It is as if the incident was something to be celebrated. Some even asked when they would be able to confirm the news and pop the champagne...

Perhaps they think it did justice to Tesla as if the lack of information or articles was a proof that the media wants to report only negative stuff on the company to hurt it or even to kill it: a sort of plot against electric mobility itself. What they fail to recognize – apart from a big, etc. – is that Tesla is only a part of that reality, even if a big one.

What most do not seem to realize is that any suspect EV blaze has to be reported as much as bizarre fires on ICE cars: all of them could demand a recall, with safety issues involved. GM recently had them making headlines in Brazil and abroad with the second-generation Onix, the best-selling car in that market.

These cars started catching fire spontaneously – even inside the factory parking lot, as above – due to an engine mapping error that caused the engines to blow up, dropping oil over hot exhaust pipes. Chevrolet had to recall 19,050 vehicles due to the issue. And that was newsworthy not only in Brazil but also abroad, which should end the lousy argument that the press does not cover ICE fires. SSedan made this educational text to show what a fallacy that is.

Indeed. There are more combustion-engined car fires because there are more ICE vehicles out there. Many more. Some are really old; others don't see a technician for years or even have proper oil changes. When EVs are that popular, we may have the same sort of issues with them.

Although electric cars exist for ages, lithium-ion batteries and electronics have made them viable only very recently. There is a massive expectation that they are not just as safe as a regular car: they must be safer to stand as a compelling business case, end concerns, and attract potential buyers. When anything like a fire happens to them, people want to know why. They have the right to.

In other words, any such episode is not detrimental solely to the brand, but to the EV cause as a whole. I was relieved to see the forum user S4WRXTTCS knew that. I have no idea who this person is, but Darth Vader would say, "common sense is strong with this one."

Luckily, there are more, such as bjrosen and sidetracked1, but they are perhaps too few to hold back the legion Umberto Eco once famously said that invaded the internet. Some even dispute the fact that EVs as a whole can be harmed by comparing them to smartphones. It is as if iPhones and Android mobiles ever had to prove themselves against anything that preceded them in the same fashion. Worse still: something that still dominated the market. Eco was right.

These are the guys that love to claim journalists receive money to speak well or bad about any company or "cause." The conspiracy theorists that believe anyone that does not condone their points of view has a hidden agenda. Some even curse us saying we will burn in hell for not protecting their beloved companies. The excuse is that making any negative report on what they love – especially with substantial evidence – will destroy the planet. They would rapidly change their minds if it were their cars or garages burning to a crisp.

The fact is that the press has a duty, and most of us take it very seriously. If there is a fire without any apparent reason, we have to cover it as much as we spoke of a Hyundai Kona fire in Canada and a BMW i3 in Toluca Lake. Whatever the brand is and for the same reason: we have to help discover why that happened. For the record, these cases I mentioned are still to be clarified.

If guys that brag about being EV advocates swear at people that have issues with their EVs and the professionals that try to help them, wait for their second moves. They will probably rejoice to see any competitor burn, as they did now. They don't care about EVs: their concerns are for a single brand. If it sold combustion-engined cars, they'd buy them. Some are happy with a flamethrower...

The truth is that this very brand had the goal to make more manufacturers go electric. When it finally manages to get there, people that should celebrate that take pleasure in seeing things go wrong for the followers of the electric mobility trail Tesla opened. Go figure.