Will the government pass laws that make ICE’ing punishable there?

After we wrote about the “Revenge Of EVs” in Croatia, we got many reactions to what Igor Kolovrat and 14 other electric car owners decided to do. Most of them, negative, ranging from pure disapproval to threats.

We have talked to Kolovrat, and our impression is that he just got tired of waiting. ICE’ing – having combustion-engined cars block a charging point – is a severe issue in Croatia, and the government there does not seem to care about it.

“The idea came from the position of someone who has been driving electric cars for almost ten years and for numerous times cannot charge because a fossil-fuel car is parked at the charging point. In Croatia, I would call the services and the police, but each time the answer was that there was still no law under which they could act. I installed almost all first charging stations in Croatia. I even donated one in front of Nikola Tesla’s birth house in the village of Smiljan, in Lika county, before our Nikola Tesla EV Rally started in March 2014. Look at the paradox; you can not even charge at stations you installed. It makes me very angry because most of those people will soon drive electric cars as well. And they will enjoy them.” 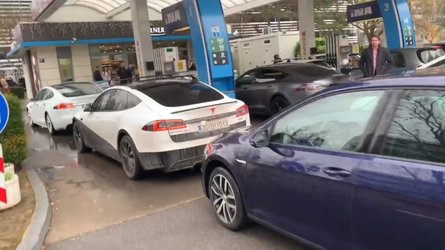 Revenge Of The Electric Cars? EVs Block Gas Station To Prove A Point 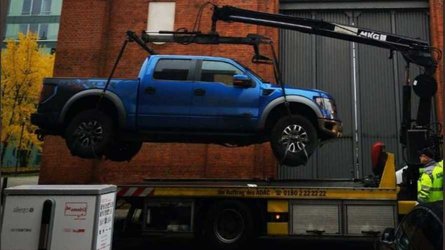 In other words, ICE cars can park wherever they want with no consequences in Croatia. As if charging spots were only common parking spots. Even PHEVs users there lack the courtesy of knowing that EV charging points are not reserved for cars that are not being charged, even if they can be.

Kolovrat has tried to solve the matter in the most friendly way possible dozens of times to no avail.

“I wrote letters and tried in various ways to point out this problem, but as combustion-engined cars rule in Croatia, my voice could not be heard. There have been several incidents at the Tesla Supercharger east of Zagreb and one of our friends from the Tesla community has been physically attacked by locals who were intoxicated and parked on a Supercharger from a pure whim.”

Gallery: What Led Croatian EV Owners To Plan "The Revenge Of EVs?"

Apart from physical aggression, there were also cases of intimidation, as with this car from the Croatian Judo Federation below.

The guy parked at a charging point, and, when he was asked to park elsewhere, he said: "Do you see the sticker on the hood?" He was referring to a HEP sticker. HEP is the state-owned grid company in Croatia, about which we will talk more ahead. Anyway, he could also be talking about the fact that he was probably a fighter. Not a very sportsman attitude, for sure.

When people are ignored, they scream. But even that was not as harsh as people may have thought from the first reports on the "performance," as Kolovrat calls it. He and his friends made sure everything was as pacific as it could be.

“As you know, there are already various movements of electric haters, and incidents are constantly occurring where there are more EV drivers. So I invited friends and asked them to invite others. Not only Tesla drivers but other EV owners as well to join us. The performance was intended as a message to the government. We have a problem that no one wants to solve and this was the only way to get attention. I must point out that it all took about 6 minutes, that we had previously called the media and that each of us 15 made some purchases at a gas station, whose employees were surprised but very friendly, as we were.”

“This event took place in Zagreb, Croatia, at an INA gas station in the city center. INA is a Croatian-Hungarian company that actively ignores climate change and strongly influences public opinion in Croatia as a company and with lobbyists. There are circles that want to keep Croatia in the fossil fuel chains for as long as possible. This year, the Croatian government awarded concessions in new areas – mountains, national park edges, beautiful karst natural areas, and the Adriatic Sea – as if oil would be fuel forever. At the same time, our biggest enemy in all E-mobility actions is the state-owned grid company HEP, the most influential and largest company in Croatia. It either ignores our activities or openly obstructs us: chargers randomly charge, often do not work, the charge for network connection costs more than the charger itself, etc.”

As a company that lives of selling electricity, it is bizarre that HEP does not favor EVs, but that is perhaps because the Croatian government favors oil, according to Kolovrat.

“To set up a charging station in Croatia, connection fees cost twice as much as the charger itself – around €250 to €300 per kWh. And it takes an awfully long time. For this reason, I had to look for other solutions back in 2015. Thanks to HEP, I was forced to innovate and made the first solar-charging station with battery storage. Also, I can mention my first meeting with the HEP board of directors, in 2013, when I presented them the rally. They were hostile.”

Not only them, as you have seen in the tweets above. But how did it end up for Kolovrat and his fellow Croatian EV owners? Did it pay off to make the “performance,” or did it backfire?

“The next day, they started with the legalization of punishing those who obstruct charging stations. In some positions that were constantly occupied by fossil-fuel cars, now there is peace and good. We definitely encouraged some infantile petrolheads to park at charging spots the next day and post a photo with some inappropriate and offensive comment on EV, but they certainly do so with many other rule violations. Anyway, I just got a message in which the city administration officials and so-called energy experts discuss the solution. Our protest woke them up and the traditionally slow Croatian bureaucracy started moving. After the quietest rally – as Los Angeles Times stated – we have the quietest protest.”

The pictures above were taken after the protest. And they show free charging spots where EV owners usually had none.

Despite the apparent success, Kolovrat promises to keep protesting until the situation changes.

“We will not stop until the law for punishing parking at charging stations passes. For some time now, we have been advocating the adoption of a law that would exempt all EV buyers in Croatia from paying VAT. If for some reason it is not possible in the EU, to at least reduce it to 2 percent or 3 percent. The paradigm is changing and I want to actively participate, creating new solutions and enjoying the fight of David vs. Goliath.”

Part of Kolovrat's efforts in this is the Nikola Tesla EV Rally. Maye Musk has participated in its second edition, in 2015. Below you can see both of them on that occasion.

For the detractors of the “EV performance,” he has only one thing to say.

“If we wanted to provoke incidents, then we would have stayed longer. We coordinated everything with the media. The intention was to point out and show how stupid it is to deprive someone of their ability to move and to point out that this is constantly happening to electric vehicle owners.”

Amazingly, the fiercest criticism came from where Kolovrat least expected it.

“At Tesla Owners Worldwide, some people were very offensive to me. Despite repeated explanations of what it was about, they were still persistent in insulting and belittling this action, which we called after the movie of Chris Paine. If you look at the profiles of some of the most vocal critics of our action, you will find that none of them drives a Tesla or other EVs. They proudly keep fossil-burners on their profile photos. My post has been removed by administrators because in their view it promotes misconduct and has nothing to do with Tesla or the industry in which Tesla operates.”

We hope Kolovrat and other EV drivers in Croatia finally have some peace of mind. And that, when they call the police, people parking regular cars at charging spots face the same treatment a Ford Raptor had in Berlin. It is only fair.

Even if that happens, Kolovrat still has other demands.

“I have been advocating for some time that Croatia be officially proclaimed the ‘Homeland of Nikola Tesla’ and that the implementation of new socially useful technological solutions is accelerated in every possible way. Technology is advancing much faster than governance. We do not have time to wait for bureaucrats to realize the benefit to the people as our planet gets warmer and warmer.”