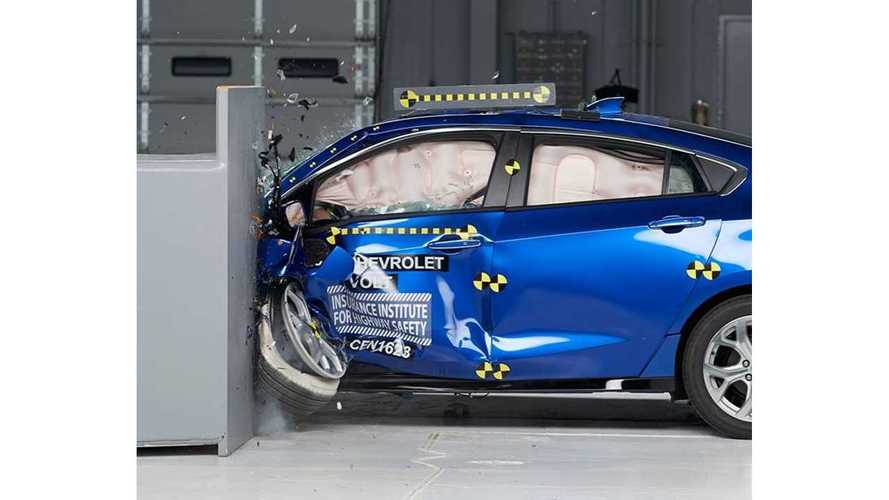 Read about the safest plug-in cars on the road today according to the IIHS and NHTSA, as well as each vehicle's standard and available active safety equipment.

The National Highway Traffic Safety Administration (NHTSA) rates cars on a five-point scale based on a series of crash tests, including frontal crash, side crash, and rollover. Recommended safety technology is also a factor, which changes depending on model-year expectations.

Read Also: Here Are The 8 Cheapest Electric Vehicles On Sale In The U.S. Today

The Insurance Institute for Highway Safety (IIHS) is the other major organization that rates vehicle safety, and its process is much more involved.

The IIHS rating system is broken down into Good, Acceptable, Marginal, and Poor. Each category, as well as the overall score, are scored this way. Finally, the IIHS classifies the best cars in each class as Top Safety Pick and Top Safety Pick+. According to the IIHS:

To qualify for 2018 TOP SAFETY PICK, a vehicle must earn good ratings in the driver-side small overlap front, moderate overlap front, side, roof strength and head restraint tests. It also must earn an advanced or superior rating for front crash prevention and an acceptable or good headlight rating.

Keep in mind that not all models are tested by both organizations and some aren't tested at all. Also, some newer models have not yet been evaluated. If it's not a brand-new model, usually the comparable outgoing model's scores paint an ideal picture of what to expect. In the case of an all-new model like the Honda Clarity and Nissan LEAF, results are not yet in, so we'll have to update and republish this post as more data becomes available.

So, which plug-in cars fare the best and what safety technology is standard and available?

*You'll find related crash test videos for some models in the listings below.

The Bolt has not yet been tested by the NHTSA, but it's an IIHS Top Safety Pick. It comes standard with a rearview camera and GM's Teen Driver safety system, which lets you set speed and audio limits for inexperienced drivers.

The Volt earned a five-star rating from the NHTSA and is an IIHS Top Safety Pick+. It's equipped with a rearview camera and Teen Driver.

Like several luxury vehicles, the Tesla Model X hasn't been evaluated by the IIHS. However, the NHTSA gives the "2017" Model X five stars in every category.

The Model S has a history of high scores for safety. The model tested in 2017 earned the highest rating of 'Good' in four out of five crash tests, however, it was downgraded to 'Acceptable' in the Small Overlap Front test. The NHTSA has only tested the Model S in the rollover test, in which it received five stars.

The Energi version of the Fusion wasn't separately tested by the IIHS, however, its scores are based on those of the similar ICE version, which is an IIHS Top Safety Pick. The NHTSA is currently testing the Energi, but not all scores are in. It's assumed that it will receive the same overall five-star rating as the gas-powered Fusion.

While the BMW 5 Series wasn't rated by the NHTSA, it's an IIHS Top Safety Pick+. It comes with a rearview camera, LED headlights, adaptive cruise control, and a driver drowsiness monitor. It also has a special feature called the Active Protection System, which tightens the front seatbelts and closes the windows and moonroof if it senses a potential collision. It also holds the car in place after the crash by locking the brakes.

The gas-powered GLC is an IIHS Top Safety Pick+, and it earned a five-star rating from the NHTSA. The 350e comes standard with a rearview camera, crosswind assist, forward collision alert, automatic emergency braking, and a driver drowsiness monitoring. Like the BMW 530e, it includes a feature that prepares the car and passengers for a potential collision (Pre-Safe).

Both the standard Sonata and Sonata Hybrid are Top Safety Picks and NHTSA five-star recipients. The Sonata plug-in hybrid comes with a rearview camera, a blind spot monitoring, rear cross-traffic alert, land change assist, and brake assist, which will increase braking pressure if it doesn't sense enough to avoid a collision or lessen the impact.

If you want any other active safety features, you have to move up a trim. Then, you get forward collision warning, lane departure warning, adaptive cruise control, rear parking sensors, and automatic high-beam assist.

There's one caveat to the fact that specific scores are not always given to a model's different powertrain options. Though the Optima PHEV is mostly the same car as its gas-powered siblings, it doesn't include any active safety features unless you choose the expensive ($5,250) Technology Package. The package comes stocked with just about every typical safety feature on the market today. Without the package, the Optima Plug-In can't be considered a Top Safety Pick, though it still earns great scores in crash tests.

While the Kia Soul EV wasn't tested by either organization, the gas-powered Soul is an IIHS Top Safety Pick+. It also received a five-star rating from the NHTSA.

Surprisingly, the base model doesn't include any active safety features aside from a rearview camera. If you step up to the + trim, you get front and rear parking sensors and a brake assist system. It's important to note that if the IIHS did rate the Soul EV separately, it can't qualify as a Top Safety Pick since it doesn't offer crash prevention. However, this doesn't negate its high marks in crash tests.

This list is not exhaustive since we are still gathering information on certain models and some tests are not yet in. We will publish 'Part Two' soon and then update and republish each as new details become available and/or when new models come to market.

The bottom line is that there is a multitude of plug-in cars that perform well in crash tests, and most come standard with a respectable list of active safety technology. If you can afford to spend the money, many of these vehicles offer an impressive list of optional advanced safety equipment.