What Does Top Gear Think Of The Ford Mustang Mach-E Vs Tesla Model Y?

The Mustang Mach-E is one of the first true Tesla rivals based on its performance, practicality, and price.

Why is everyone comparing the all-new Ford Mustang Mach-E electric crossover to the Tesla Model Y? Silly question, right? It honestly doesn't matter what car it is, as long as it's an EV, it's going to get repeatedly compared to Tesla. Just about every auto publication and media outlet has compared every new EV to Tesla. However, this is a comparison that truly deserves plenty of attention.

Comparing the all-electric pony to Tesla's relatively new, "affordable" performance crossover is arguably the most sensible comparison we've seen to date, aside from maybe comparing the Porsche Taycan to the Tesla Model S. It seems as though Ford had the Model Y in mind as it worked to develop the Mustang Mach-E and assure that it would actually appeal to future EV owners, and perhaps even convert some hardcore Tesla folks.

"As punch-ups go, this is right up there with David and Goliath. The irony being that Ford is the challenger and Tesla is the giant in this ring. Tesla’s value recently topped $600 billion – a staggering 16 times that of the Ford Motor Company."

As the story goes, Top Gear treats the rivalry like a boxing match, with sections divided and labeled: Round 1, Round 2, and so on.

In Round 1, Top Gear sets out with both cars, equally charged, to carve some canyons. It expects the Mustang to be the more enjoyable car to drive, especially since Ford had the Model Y in its sights as it designed the Mach-E. However, in the end, Top Gear prefers driving the Model Y. In fact, it says the Model Y is even more fun to drive than the Model 3.

Round 2 focuses on the two electric crossovers' interiors, features, and people- and cargo-friendliness. Top Gear says the Mach-E certainly has a nice interior, and it calls the Model Y's cabin "minimalist heaven." Overall, it's impressed with both car's interiors for different reasons. It also likes the Ford's Co-Pilot360 safety suite, though it says Tesla's Autopilot is "on an altogether different planet of sophistication." Still, Top Gear decides to call Round 2 a tie.

The third round is quite subjective, but Top Gear treats it in just the right way. It applies to the curb appeal of each vehicle. No matter what we think, you think, or they think about these two crossovers, Top Gear took notice of what the general public thinks. They paid attention to onlookers and learned that the Mach-E may as well have been the only car to look at. Perhaps it was due in part to its "Grabber Blue" exterior color, but people were definitely looking. The red Model Y, not so much.

The fourth and final round focuses on charging. Not surprisingly, the Model Y gets the nod. Top Gear says, "Superchargers almost completely remove the whole range anxiety thing."

In the end, Top Gear says both EVs are great family crossovers. Ford has really done a solid job here, and the Mach-E is impressive. However, Top Gear's winner is the Model Y, "Not because of its speed and handling, but because it feels the fresher, more forward-looking product." However, it's not quite sure Tesla should have a market cap that's over 16 times more than Ford's. 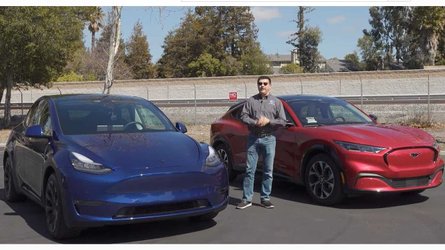 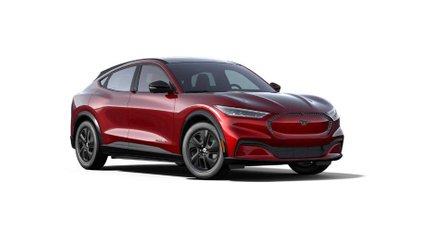 Follow the source link below for the full story. We think it's definitely worth the time it takes to read it. Then, scroll down and leave us a comment.