Rivian R1S Versus Tesla Model X: By The Numbers 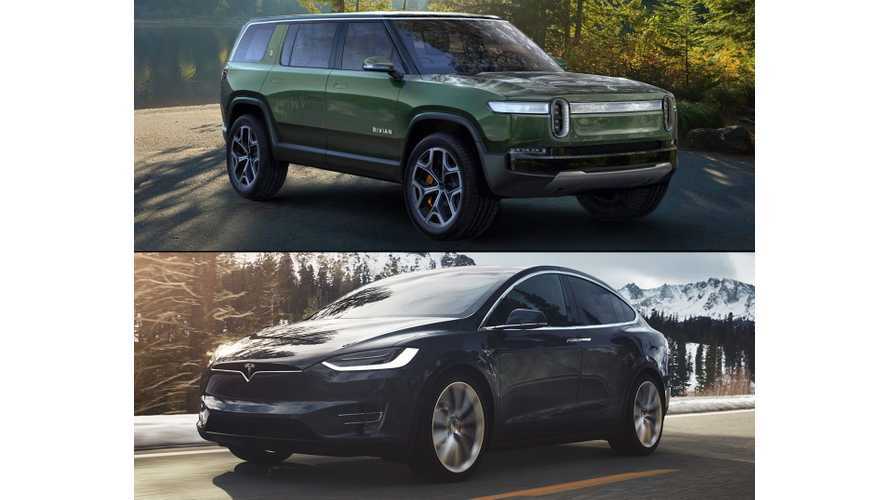 Tesla wanted competition. It's got it.

Tesla has had the all-electric SUV market to itself since it first launched its Model X a little over three years ago. Although it will now see some competition from the likes of the Jaguar I-Pace and Audi e-tron, this newly revealed Rivian R1s, boasting as many as 410 miles of range, is the first to put it dead in its sights. Their exterior dimensions are also extremely close. Though still a couple years away from production, it's not too soon to see how the two stack up against each other.

The two main things set the Model X apart from its would-be competitors is its ability to carry 7-passengers and range. The R1S, which also has three rows — excluding the version with the largest battery pack — mostly matches its people-carrying ability. The newcomer, however, far surpasses the Tesla's range, with its biggest 180-kWh battery option offering 410 miles of travel on a charge. Impressive!

Available, with luck, sometime in 2021, pricing for the Rivian SUV is yet to be announced. Its R1T pickup, which is based on the same platform, is supposed to start at $69,000 for its smallest battery trim, but we would not be surprised if the base R1S costs a bit more. For comparison sake, the 237-mile Model X 75D starts at $87,000. On a mile-of-range per purchase-dollar basis, we suspect the Rivian may come in a little cheaper, but this is quite speculative.

SUVs are all about hauling families and their stuff, so storage is an important consideration. Here, the Rivian offers 11.65 cubic feet (330 liters) of storage in its frunk and 6.36 cu. ft. (180 l) in the rear bin, adding up to 18.01 cu. ft. (510 l) in total.  Tesla, which doesn't break down storage says the Model X offers 88 cu. ft. (2,492 l) of cargo space with its third row folded down. Obviously, the wide discrepancy here means the two companies are not offering apples-to-apples space figures. We estimate the R1S will offer more room overall, since its roofline doesn't slope down and impinge on rear space as it does in the Model X and its frunk looks at least as cavernous.

When it comes to performance, both of these vehicles offer the type of acceleration unheard of in similarly-sized gasoline-powered vehicles. The slowest Model X zips up to 60 miles per hour in 4.9 seconds, matching the slowest R1S, which also takes 4.9 seconds. Here is where it gets more interesting, though. The quickest Model X, the P100D can do the deed in 2.9 seconds, but does so at a significant cost premium. The 135-kWh version of the Rivian SUV is that brand's quickest at 3.0 seconds flat. The variant with the largest battery, that 180-kWh pack, adds a couple tenths at 3.2 seconds. This means that while Tesla may hold on to its racing crown, the 135-kWh R1S just about matches it for what we expect will be significantly less cost. It should be interesting to see how all this works out when the rubber hits the drag strip.

One area the Tesla seems to retain its advantage is efficiency. Its Model X 75D manages 3.16 miles per kWh, the 100D, 2.95 miles per kWh. Rivian published figures suggest that both the 105-kWh and the 135-kWh R1S return 2.29 miles per kWh, while the 135 kWh version is just slightly worse at 2.28 miles per kWh. We suspect actual real-world results to be somewhat different, but we doubt they will improve enough to approach what the California company can achieve.

As we said, there is still a ton of time before we can make reliable comparisons between the two vehicles when it comes to their various performance metrics. Depending on the needs of a potential buyer, either could clearly offer advantages over the other. This is why it's great to see another entrant coming to the all-electric SUV arena. Variety is the spice of life and Rivian R1t and Tesla Model X still offer somewhat different flavors.

Gallery: Rivian R1S Versus Tesla Model X: By The Numbers

Gallery: Rivian R1S Versus Tesla Model X: By The Numbers