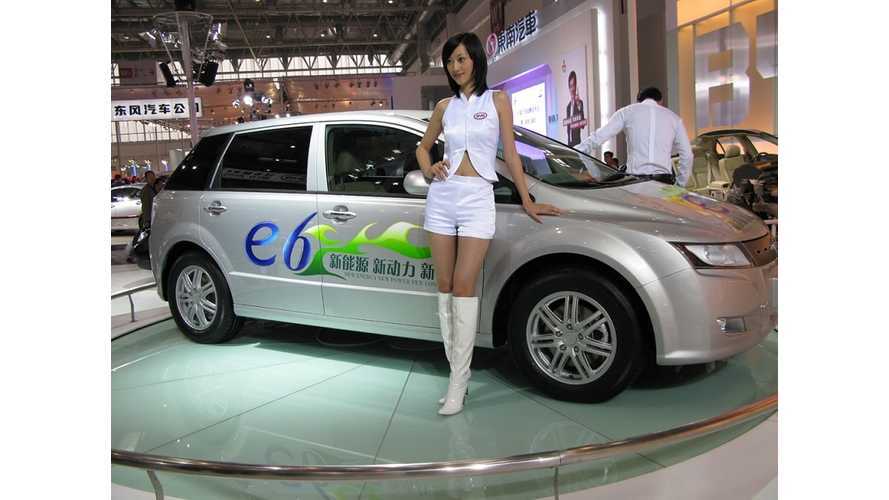 About 2 months ago, a shipment of about 50 BYD e6 electric vehicles landed in the UK with the promise of entering testing around the country with fleet operators.

Now that the cars are making their ways onto British roads, reviews are starting to come in.

However, all is not great for the car that was first promised to Americans in 2010 for around $35,000 before incentives.  As an example of this, Steve Cropley at Autocar has gotten his hand on one, and is not all that impressed with his first spin in the Chinese-made EV.

Moving on.  Lets see what that kind of money can get in the form of an EV from China these days.

The electric crossover is comparative to a Land Rover Freelander in size, and has decent interior proportions, but Mr. Cropley finds the centrally mounted info screen a little complex, while some of the finishes and color choices of the interior may not appeal to UK buyers.

BYD says the e6 is capable of 186 miles, although 140 miles for daily "real world" life is more likely.

The BYD e6 has been announced and built in a couple different powertrain configurations, unfortunately this version in the UK has the 119 hp and 332 lb-ft of torque set-up, which the reviewer feels is inadequate for the general public, but appropriate for fleet owners such as taxi companies - such as the use for these first 50 vehicles.

With a weight of 2380kg (5,247 lbs - think Fisker Karma heavy), it should comes as no surprise that the e6 only managed a 0-60 time of about 15 seconds.  The BYD electric utility vehicle also has a top speed of 87 mph...provided of course you have a really long way to go in order to get the speedometer up that high.

The BYD e6 Is Technically A 5 Door Hatch Crossover

As for the driving experience itself:

"Acceleration is leisurely, but the car cruises well, with little wind noise. Sadly, this silence reveals whirrs and buzzes and some odd creaking noises at the extremities of lock that wouldn’t suit UK private buyers.

In fact, to suit a UK environment, the car will need wholesale re-tuning of its power steering and spring and damper rates, which allow far too much pitch and bounce. The steering is quick, but lacks the feel we’re used to."

BYD says that it is now "polishing" the vehicles for wider sales in the UK, and is engaging consultants to help the brand sell better.  Mr. Cropley feels that the car should really having a starting price of £28,000 when/if it is made available to the general public.  We can't disagree with him.