The company's flagship "100in5" technology relies on silicon-dominant anode lithium-ion cells, which enable rechargeing enough energy in 5 minutes for 100 miles (160 km) of range*.

*The exact range replenishing speed depends on the battery size/car model and its average energy consumption.

The Israeli startup notes that the cell samples are production ready in a form factor suitable for electric vehicles: 30 Ah pouch cell. They are destined for intensive, real-world testing.

StoreDot does not say which OEMs are included in the pilot program, but there are "over a dozen of strategic partners and potential OEM customers across the globe," engaged in the testing. We guess that includes automotive investors like Daimler, VinFast, Volvo (in April 2022), Polestar (in May 2022), and Ola Electric. Among the investors are also BP, Samsung, TDK and EVE Energy (which is also a manufacturing partner).

According to investor website PitchBook (via Reuters), since its founding in 2012, StoreDot has raised $269 million, at a valuation of $1.3 billion.

Mass production of "100in5" batteries is expected to begin during 2024.

“Shipping the large form factor samples of our advanced ‘100in5’ battery technology to over a dozen of strategic partners and potential OEM customers across the globe is a truly historic moment for StoreDot. It is the culmination of ten years of intense research and development and demonstrates our strong determination to push the known boundaries of battery technology to accelerate mass EV adoption and eliminate range and charging anxiety.”

An interesting thing is that extreme fast charging is not the only advantage of the StoreDot's batteries, as the company notes also more than 900 consecutive charging cycles (10% to 80% SOC) in 10 minutes, with an energy density of more than 300 Wh/kg. As we understand, it means a very high gravimetric energy density, as well as potentially low battery capacity degradation (more details would be required to say for sure). The company's next goal is to increase the number of cycles to 1,000.

“I am delighted that we have now commenced intensive, real-world testing with leading OEMs and am confident that our cells will exceed OEM expectations with respect to energy density and extreme fast charging. Current performance shows >900 consecutive extreme fast charging (10% to 80%) in just 10 minutes, with more than 300 Wh/kg. We are on track to exceed our commercialization milestone of 1000 cycles this year."

The strategic plan includes also improvements in terms of charging power to replenish enough energy for 100 miles of driving in 3 minutes (in 2028) and in 2 minutes "within a decade". Those new cells are also promised to offer significantly higher energy density of respectively 400 Wh/kg and over 500 Wh/kg.

It all sounds very promising, with the 10-year target almost too good to be true, so let's wait for the test results by OEMs. If the "100in5" technology is really ready for prime time, then within a year or two, we should hear some news about battery gigafactory investments. 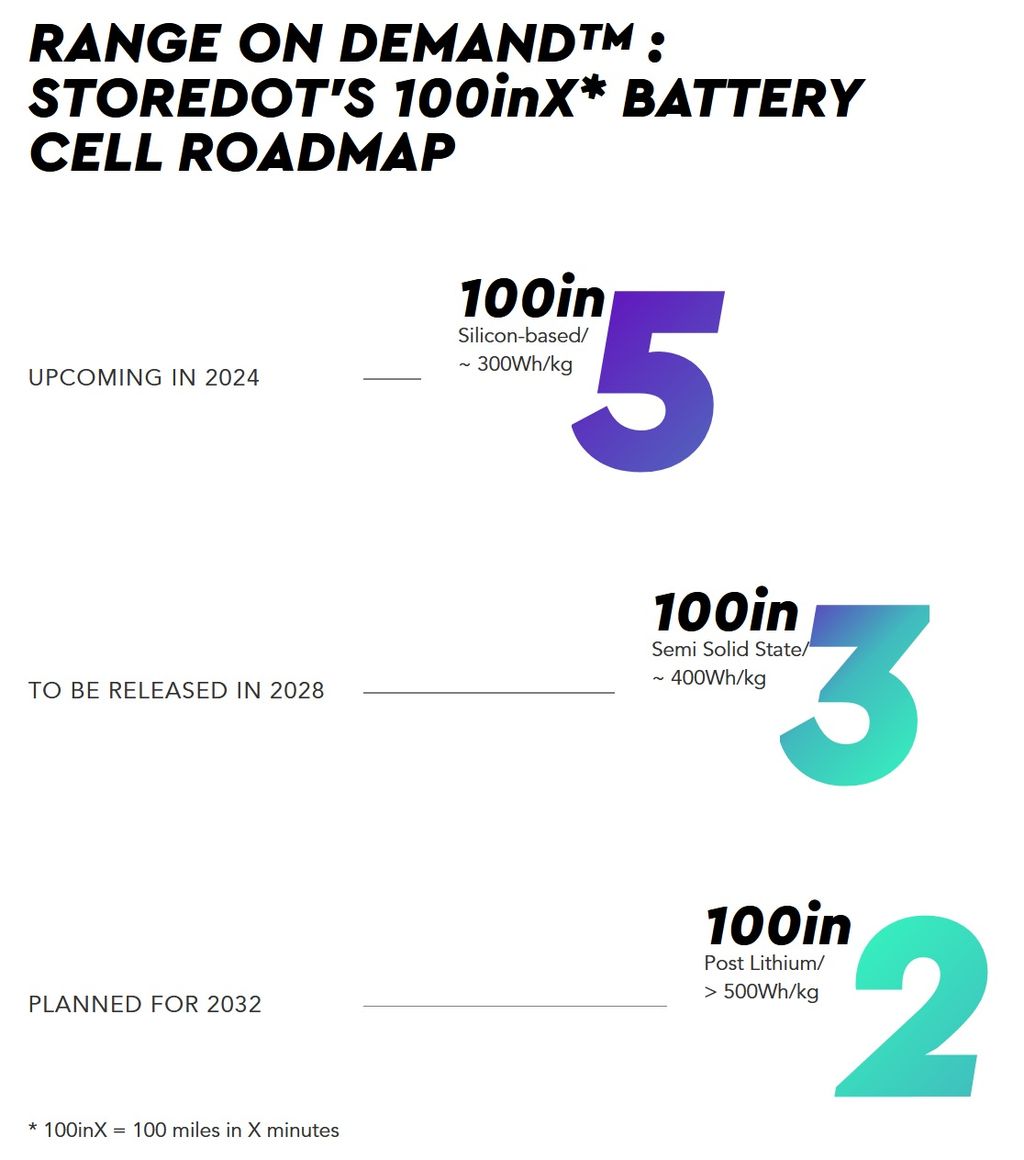