The American EV manufacturer ended 2021 well and it seems on track improve on that performance this year.

Tesla had a great 2021, building and selling more cars than ever and increasing its market share and presence. But it looks like it’s been doing even better this year, according to a new report published by TrueCar, which estimates that the automaker’s sales so far in 2022 are an impressive 105.8 percent above last year.

TrueCar notes that in the US, Tesla sold 47,629 cars in August, around 11 percent more than in July, showing an upward trend mont-over-month. The source also says Tesla has increased its US market share year-over-year from 2.1 percent in 2021 to 4.1 percent this year (about the same as Subaru, Nissan or Volkswagen). That’s almost double, but it’s still far behind overall sales leaders like General Motors with 16.4 percent or Toyota with 14.8 percent market share. 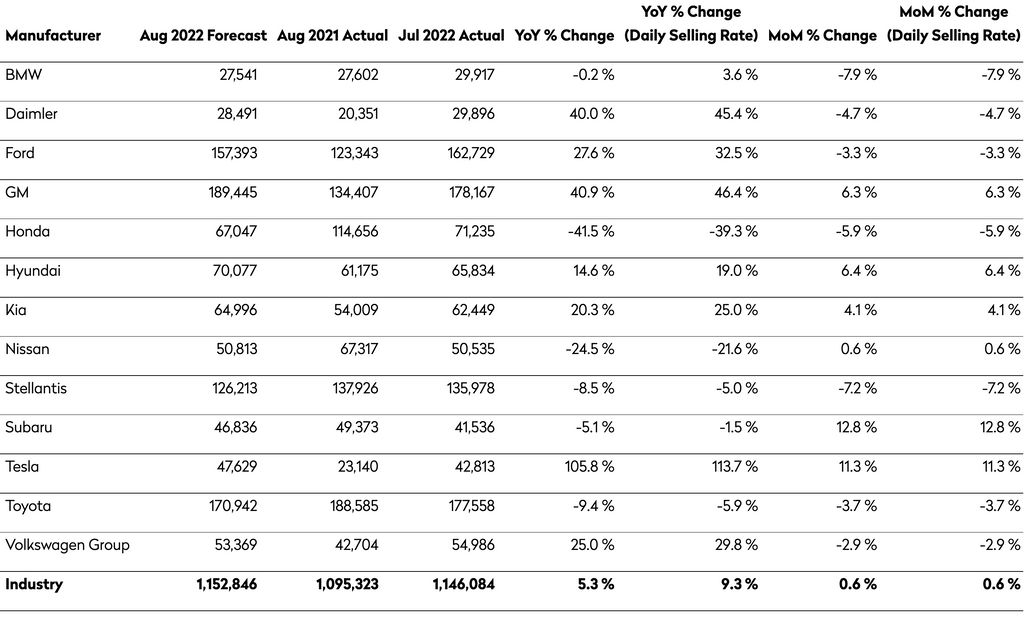 Keep in mind that this report doesn’t differentiate between EVs and other types of vehicles, so it’s essentially comparing Tesla to other automakers whose bulk of sales is still made up of gas-burning vehicles. Looking at the entire market, Zack Krelle, Industry Analyst at TrueCar, points out that

August is shaping up to confirm our early predictions that the industry may be turning the corner. We're seeing consecutive month over month increases for incentives, while average transaction prices are softening. Inventory is also slowly growing, and sales are improving slightly.

Tesla has been doing very well elsewhere too. In Australia, for instance, it outsold the ever popular Toyota Camry to become the fourth-best selling vehicle in the country in August. In China, Tesla has been building and selling cars quicker than ever, with a very impressive 77,000 Model 3 and Model Y sales combined last month alone.

In Europe, the Tesla Model 3 and Model Y are still the two most popular electric vehicles, and it controls just under 7 percent of the Old Continent’s plug-in vehicle market share. Its share is set to grow more as the Shanghai Gigafactory (which produces cars for Europe) has resumed production after several lockdown-related shutdowns while production at Giga Berlin (most of which will be destined for Europe) is currently being ramped up.