Most preorder holders who agree to upgrade to the Adventure package will need to pony up $5,500, Rivian says.

UPDATE: Rivian tells us that customers who signed binding agreements recently will get their deposits back should they decide to cancel their orders. As for those who wish to reconfigure, Rivian claims that most of them will see a $5,500 price difference.

Rivian has announced two significant changes for R1T and R1S preorders that will likely not go down well with reservation holders.

The first and most important one is that Rivian has discontinued the entry-level Explore package for the R1T electric pickup and R1S electric SUV, forcing people to upgrade to the better-equipped Adventure package if they want to keep their reservation.

This equates to a major price hike for preorder holders of Explore models because the Adventure package adds $7,500 based on the Rivian configurator and what it used to show just a week ago—Explore models are now gone from the website.

However, Rivian tells us that most customers who reconfigure will see a $5,500 price difference. Either way, the price difference depends on each configuration and when the customer placed the reservation. Here's part of the email Rivian sent to reservation holders of R1T/R1S Explore vehicles, courtesy of Rivian Owners Forum. 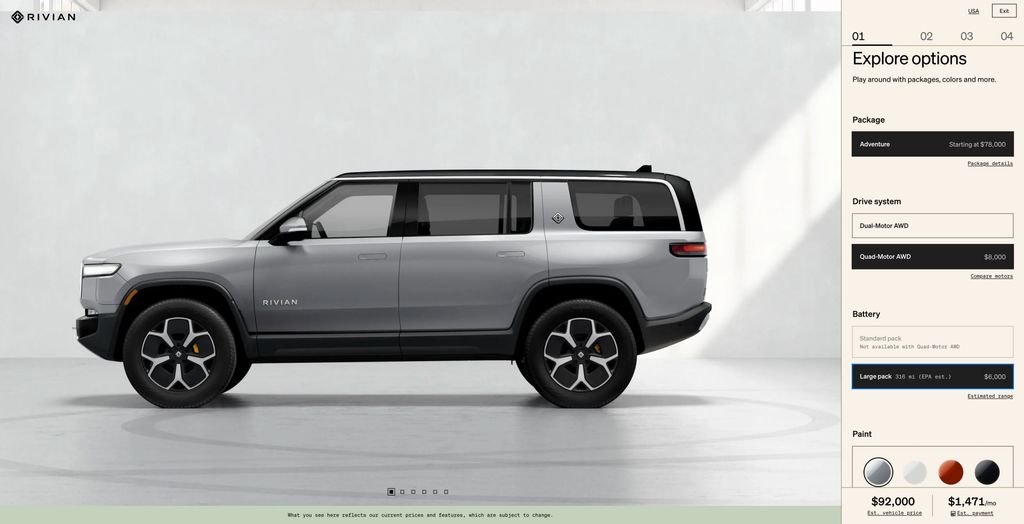 The Explore package is gone from the Rivian R1S configurator

"We appreciate your excitement for our company and our products. We have an update that affects your preorder and want to make sure you hear about it directly from us.

In order to deliver as many vehicles as possible, we have made the decision to discontinue the Explore Package. We realize this news is unexpected and apologize for how it impacts your plans.

When we initially launched our vehicles, we planned for two packages, Adventure and Explore, to offer more variety to our customers. The Explore Package was designed as our entry option and it was our expectation that a large number of customers would choose it. To date, only a small percentage of customers have chosen this configuration, with the vast majority selecting the Adventure trim. By focusing on the Adventure trim package, we're able to streamline our supply chain and ultimately deliver vehicles more quickly."

Rivian also notes that customers have the option to do nothing, but if they don't reconfigure their reservations by September 1, their preorders will be removed from the production queue. Should they decide to cancel their preorders, the company will refund their deposit.

As for those preorder holders who recently converted their refundable reservation fees to binding agreements in order to qualify for the old federal tax credit, Rivian says they will be reimbursed as well if they want to cancel their order.

To this date, Rivian did not deliver any R1T or R1S vehicles with the Explore package. Deliveries of Explore models along with vehicles equipped with the Max Pack battery were supposed to start in 2023.

The second change announced by the EV maker regards the original Ocean Coast/Ash Wood trim combination, which has been cancelled as well.

Rivian announced the change on Twitter and posted photos of an updated Ocean Coast interior featuring dark-stained ash wood—the same one used in the Black Mountain interior—instead of the light one. The automaker noted that the design update meant "we can begin making deliveries to customers who ordered Ocean Coast."

CEO RJ Scaringe also tweeted about the change, posting a video in which he takes a look at the updated Ocean Coast interior.