Tesla Software Updates Speed Up Recalls, But May Increase Risks

Reuters provides an analysis of the pros and cons related to Tesla software updates and recalls.

In a recent analysis, Reuters addresses Tesla's over-the-air software update capability and its association with recalls. It also compares Tesla to other automakers related to how many recalls are handled, and of those, how many were taken care of with a software update.

The publication is clear that Tesla's software updates are able to execute recalls quickly and efficiently. It also suggests that rival automakers may be jealous. However, on the flip side, Reuters addresses the potential risks involved "as cars become more like rolling computers."

Tesla has had a large number of recalls of late, and many of the issues have been fixed with a software update. Despite the higher number of Tesla recalls recently, the automaker has had many fewer recalls than other automakers over the last two years. Reuters shared the following graph to illustrate this: 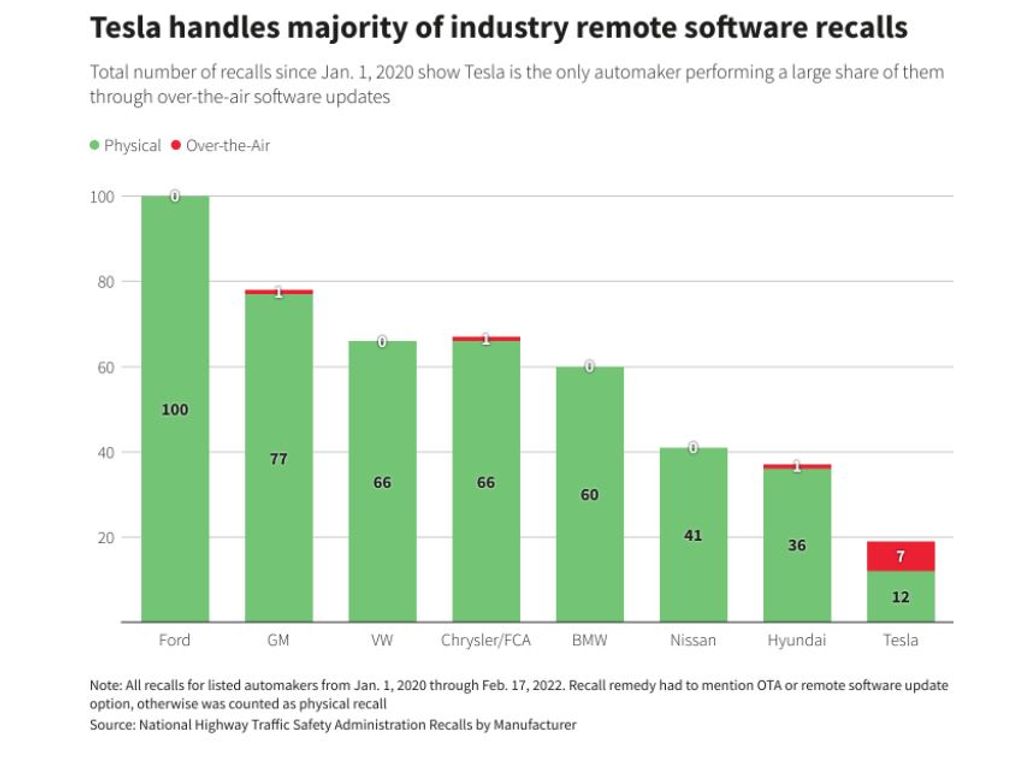 As you can see, Tesla has the lowest number of recalls over the time period, and it handled many of them with an over-the-air update.

Reuters points to the long list of recent Tesla recalls and warns that a quick fix may not always be the right answer. It's great that Tesla can roll out software updates quickly and easily, but there's risk involved if that "recall" wasn't extensively tested and/or validated.

Oftentimes Tesla sends out these updates, and then has to reverse them due to issues. One could easily argue that the update clearly wasn't ready to launch, but Tesla quickly rolled it out anyhow, knowing it can always quickly "fix" it again later. Former Tesla validation manager Florian Rohde shared:

“There’s definitely the mindset that you can fix fast so you can take a higher risk."

More specifically, Reuters mentions the "rolling stop" feature that Tesla programmed into its Full Self-Driving Beta technology. It apparently did so to make the cars drive more like humans, and not irritate following drivers, but it breaks the law.

Also addressed in the analysis is the fact that federal regulators aren't yet equipped to address concerns with the software or validate or police it. It's not tangible like a physical repair. A lawyer who deals with automotive technology lawsuits said:

“I haven’t seen any evidence that NHTSA has people with the experience and expertise to deal with software issues right now."

Tesla's software approach is aggressive, and it wants to be on the cutting-edge. Tesla CEO Elon Musk has said that "if you are not failing, you are not innovating enough." Which is certainly true. However, those failures come at a cost. The question here becomes, are the potential risks worth the potential outcome?

“A two-ton vehicle is not the same as a desktop computer or your laptop crashing. Automakers and their suppliers need to treat software that relates to safety like it’s a life-and-death issue.”

Follow the link to the Reuters article below for additional insight. Then, start a conversation in our comment section below.