Owners say they got a slew of errors after disabling TC to either have fun or just to try to get the vehicle unstuck.

Ford Mustang Mach-E owners are reporting they are getting multiple error messages after they disabled traction control to either have fun and do donuts, or when they did the same in order to try to free the vehicle after it was stuck in snow. The car displays as many as eight errors and it also doesn’t allow the user to change the drive mode.

This seems to have first been reported around 10 days ago by a Mach-E Forum member, cjrodriguez31, who said he turned off the traction nanny in his GT Performance in order to make it up the street where he lives after it had snowed. He said it was the only way he could have conquered the incline, but it also made the car go crazy, announcing that

He suspected that maybe snow/ice had built up on some of the sensors, so he immediately got the vehicle cleaned to rule that out. He went on to say that

Already cleaned all sensors and the same message KEEP POPPING UP. They reset every 3/4 minutes and keep popping back up while driving. Dealer isn't open until Monday so im hoping someone has a reset method until them. Tryed the newest Snapon computer at my uncles shop to try and reset but it wont recognize the Mach-E. Keeps popping up as a 2021 Ford Edge with eco boost.

Then others started replying to the thread, saying they had encountered pretty much the same slew of errors, although they were doing slightly different things in their vehicles. The common denominator seems to be that they all turned traction control off and the vehicle’s wheels spun freely at higher-than-usual speeds and this could have upset the vehicle.

Ford replied to his original message on Friday, asking him for VIN and dealership information. He also took his Mach-E in to have it checked at his local dealer in Rhode Island and you can see the invoice he received attached below. 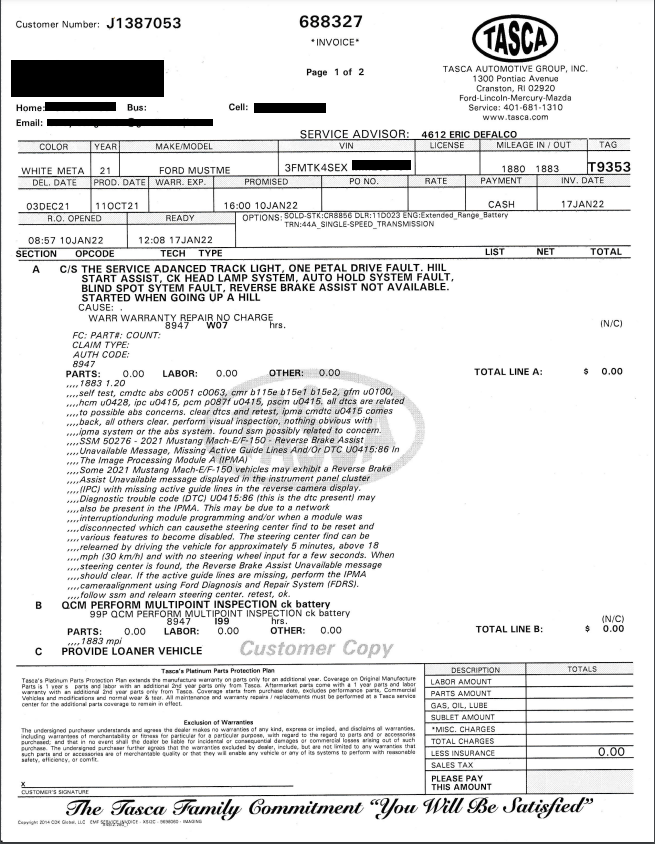 It looks like they reset all modules in the vehicle and pointed to the steering position sensor as the possible culprit for the slew of errors. Forum users also pointed to a recent software update that may be the root cause of this, because Mach-E owners have disabled traction control to either have fun or get get the vehicle unstuck before, and the vehicle did not do this.

More on the Mach-E

⠀ Here's How The Ford Mustang Mach-E Performs In The Snow
Ford Has A Secret Weapon To Battle Tesla, And It's Michigan