The data looks at 13 models and about 7,000 vehicles to assess real-world range loss in cold temperatures.

Recurrent just completed its second extensive study related to electric cars and range loss in . The publication notes that this new report marks the first time that such data has been revealed at such a significant scale.

Recurrent's community includes some 7,000 electric car owners and over 20 million data points over time. It comes as no surprise that the study found significant EV range loss in freezing temperatures and that EV range is impacted by frigid temps more than it is by extremely high temps.

To be clear, electric car range loss in cold weather is temporary. Once the weather warms up, the car's estimated and real-world range will shift back to "normal." However, if an EV is impacted by extremely hot temperatures, its battery can permanently degrade, which means less range for the life of the vehicle, regardless of future changes in temperature.

Recurrent says the Chevrolet Bolt EV is "quite sensitive" to cold weather. In fact, based on its data, the Bolt EV has a third less range in freezing temperatures than it does in temps of 80°F. 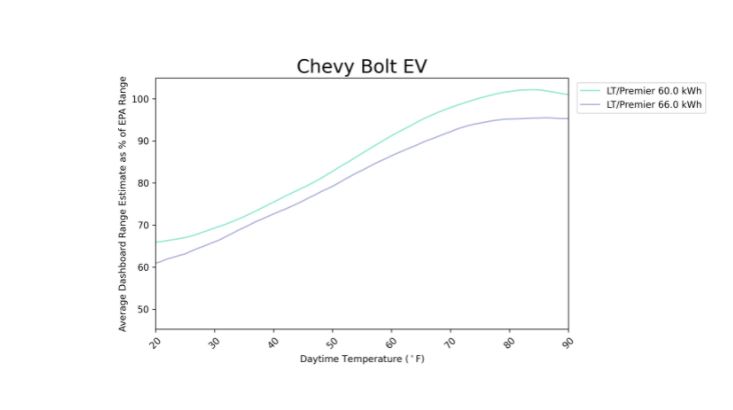 Meanwhile, Tesla's vehicles appear to lose much less range in winter weather, with range loss changes averaging only about 5 percent across various temps. 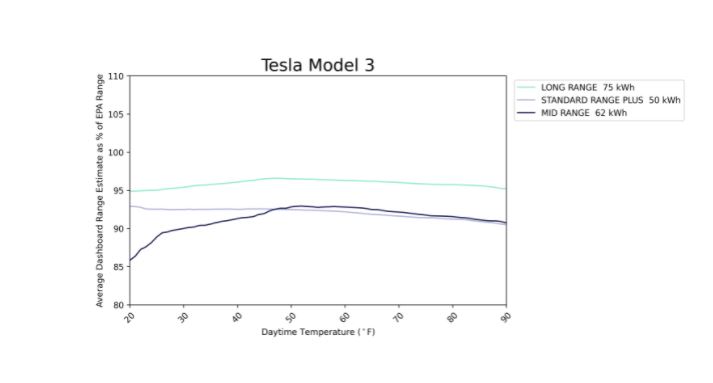 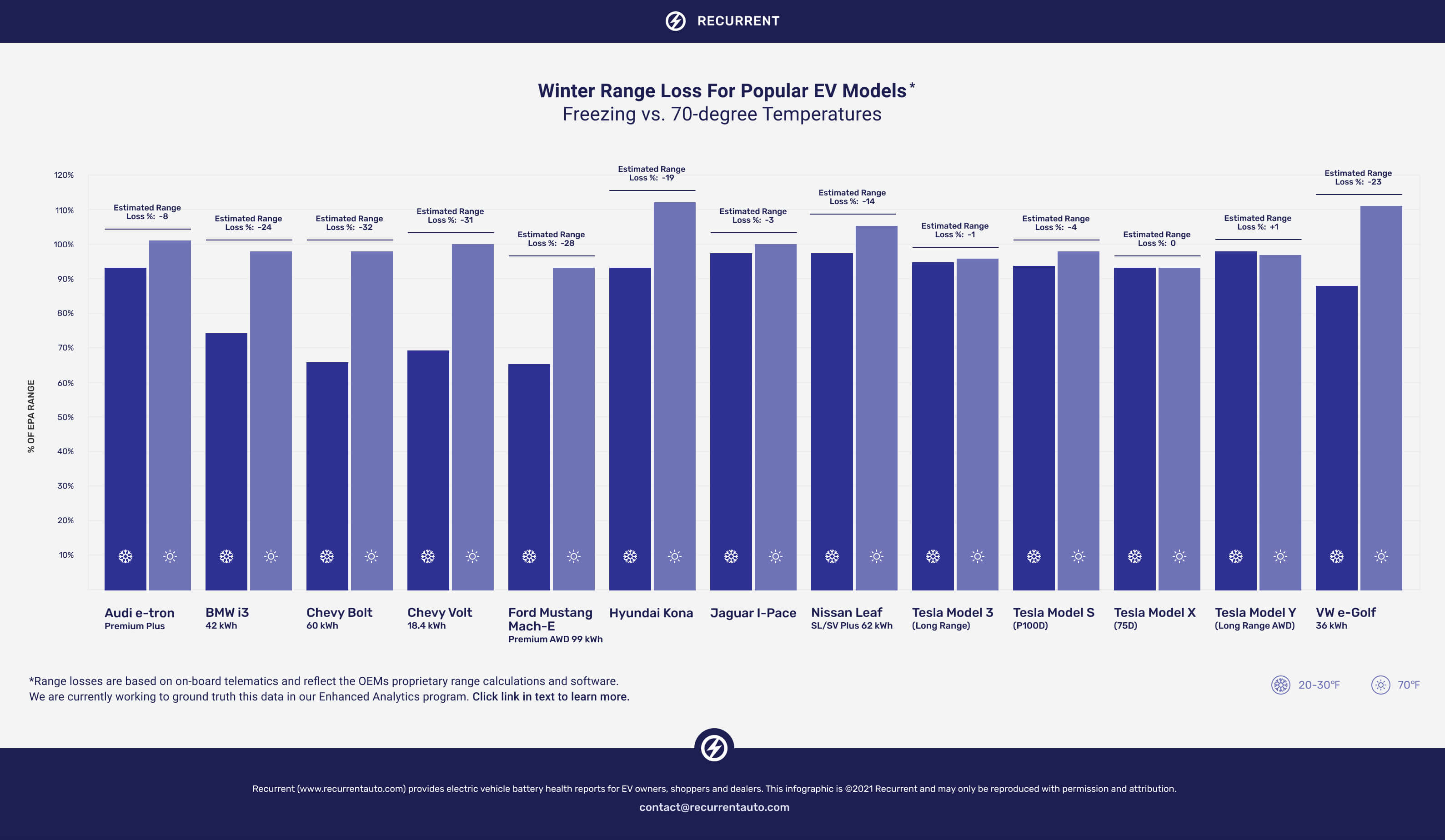 “Winter weather is something that every EV driver needs to keep in mind. Losing 10% or 20% of available range on a cold day could mean extra charging stops and longer charge times. That is especially important around the holidays, when families are traveling farther and definitely need to get where they are going. No one wants to spend Christmas morning in line at a fast-charging station.”

Additional data from Recurrent concludes that Tesla maintains strict control over its cars' onboard range estimates. This means drivers won't really see the impact of hot or cold weather by looking at their Tesla's estimated range in miles. In fact, Tesla's displayed range doesn't seem to take temperature into account, otherwise, Recurrent's results would be different.

Recurrent says it's "working to ground-truth the real world range to understand exactly how much Teslas are affected by temperature changes and to let drivers know what to expect."

Some Tesla owners suggest using the percentage system to keep tabs on how much battery energy is remaining, rather than relying on the range figure shown in miles, which can be misleading since it relies on "fixed EPA data" and doesn't account for driving habits, etc. Tesla explains:

"Tesla drivers can choose to display range as either a percentage of battery energy remaining, or remaining miles that can be driven.

Displayed range in your Tesla is adapted based on fixed EPA test data, not your personal driving patterns."

Each EV handles range and percentage estimates differently. Some EVs have a sort of "guess-o-meter" system that factors in the temperature and your driving patterns to provide a relatively realistic idea of what range to expect based on various conditions. Different electric vehicles also feature different climate control systems and battery management systems to deal with extreme temps.

Finally, while drivers may not notice or pay attention, temperature also affects gas-powered cars significantly. With the heat on in cold weather, a gas car can see a 15 to 25 percent drop in fuel efficiency. However, this is likely only the case when the car is cold. Once it's adequately warmed up, efficiency improves. This is also true of electric cars, though for different reasons. A warm battery is more efficient than one that's ice cold.

“It’s not going to make the evening news when a vehicle with a gasoline engine loses efficiency in the winter. But, I would guess that people are equally disappointed to stand outside at a gas pump in frigid temperatures as they would be at a charging station. As people learn more about their EV and the infrastructure legislation takes shape in the US, we'll hope to see a cure for seasonal range anxiety.”

If you follow the source link below, you can see an individual report on each of the 13 electric vehicles. For each model, Recurrent provides a written explanation, as well as a helpful chart showing how temperature impacts the vehicle's range.