The capability of extreme fast charging has been validated and confirmed by Mobile Power Solutions for three 2.75 Ah sample pouch cells (see report here). It actually took less than 6 minutes to achieve 80% SOC. 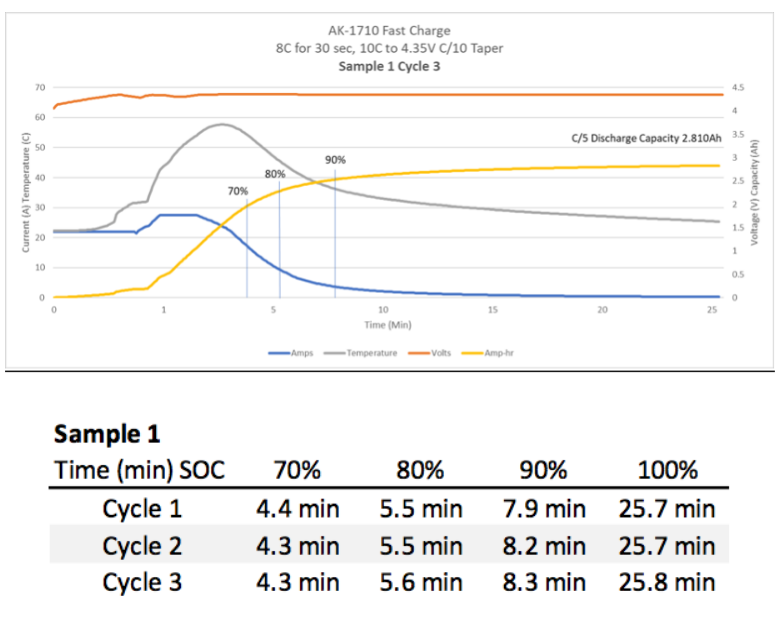 The company notes that a Fortune 100 company is sampling the technology, but it's not clear whether it's an automotive company.

The 2.75 Ah cells are about an order of magnitude too small for electric cars, but it's probably just a matter of time to scale them up.

According to the press release, the energy density of the cells is amazing, at 370 Wh/kg, however, there is no word about the longevity and cycle life.

Amprius Technologies produces the cells with the Extreme Fast Charge capability for "a variety of products including power-intensive drone applications":

"Amprius Extreme Fast Charge is enabled by the properties of the company’s proprietary Si-NanowireTM anode, which is much thinner and lighter than conventional graphite anodes and has much higher conductivity due to the high electrical continuity between silicon and the current collector. The very low tortuosity of the Si-NanowireTM anode structure also facilitates Extreme Fast Charge.

Amprius continues to advance Li-Ion cell technology by leveraging the patented attributes of its Si-NanowireTM anode, and this result reinforces its industry-disrupting performance capabilities.

Extreme Fast Charge is available on battery cells that are currently in commercial production (P/N NW445060-2.6P-007) and used in a variety of products including power-intensive drone applications. In addition to an unprecedented charging rate, the battery cell has exceptional specific energy of 370 Wh/kg and supports applications that require very high sustained power use-cases."

“These results confirm the significant benefits of our Si-NanowireTM anode for electric vehicle applications, where fast charge and high energy density are essential. The need to shorten charge times extends well beyond the rapidly growing EV market and into the broader electric-mobility markets, including micro-mobility and aviation. We are excited to share this third-party validation that confirms Amprius Technologies’ Si-NanowireTM platform delivers the highest energy density, power density and now fast charging rate for real commercial applications.”

An interesting thing is that Amprius Technologies' corporate headquarters is in Fremont, California, nearby Tesla's pilot battery facility, but there is no official info that the two are partnering on batteries: