New Tesla Paint Colors Discovered: Here's What They May Look Like

Now that three new Tesla paint colors have been discovered, people are creating renders with examples.

Tesla isn't known for launching new paint colors. The automaker basically offers one free color, Pearl White Multi-Coat, and four other basic colors that cost extra. All the colors arguably look nice, though many people believe Tesla has issues with its paint, or at least its paint shop in Fremont, California. For this reason, it's not uncommon for Tesla owners to wrap their cars, which provides them with an endless assortment of color options.

That said, Tesla CEO Elon Musk has talked about the upcoming paint shop in Germany as being one of the most advanced of its kind in the world. It comes as no surprise Tesla fans have been eagerly awaiting some new Tesla factory paint colors. Musk said in the past:

“Giga Berlin will have world’s most advanced paint shop, with more layers of stunning colors that subtly change with curvature.“

The CEO's personal Model S is said to wear one of the upcoming colors, which are as follows:

Of course, vocal Tesla investor Sawyer Merritt posted about the new colors. He also asked people if they'd create renderings so that we could see how the colors may look on Tesla's cars.

The Tesla Model 3 above is rendered with the Deep Crimson Multicoat paint color, which is rumored to be on Musk's Model S, though some people have said the Crimson Model S may belongs to a different Tesla employee. Perhaps there are two?

At any rate, below we've included another example of what the new colors may look like. However, there are many more renderings out there.

What do you think? Do you have a favorite? What are the chances of these colors being offered in markets outside of Europe? Perhaps they'll use eventually use such colors at the upcoming Austin Gigafactory? Let us know your thoughts in the comment section below. 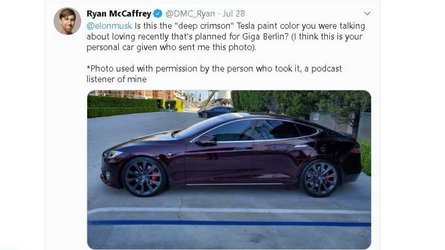 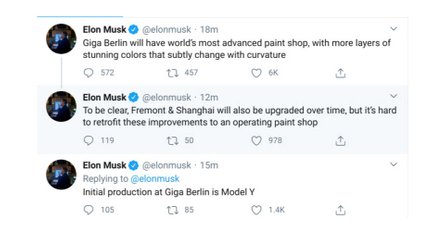