How is the Mustang Mach-E's battery system different from the Tesla Model Y and VW ID.4?

"A bottleneck is any resource whose capacity is equal to or less than the demand placed upon it."

"A non-bottleneck is any resource whose capacity is greater than the demand placed on it."

Finding a pack’s thermal bottleneck requires diving into its battery & module construction. A good starting point: the conductive thermal path from the cell to the cooling plate. I consulted Munro and Associates’ YouTube video detailing the Mach-E battery and module case on its Munro Live Channel. It provided details illustrating how the Mach-E’s cells insert into the module carrier frames and thermally connect to the bottom cooling plates. 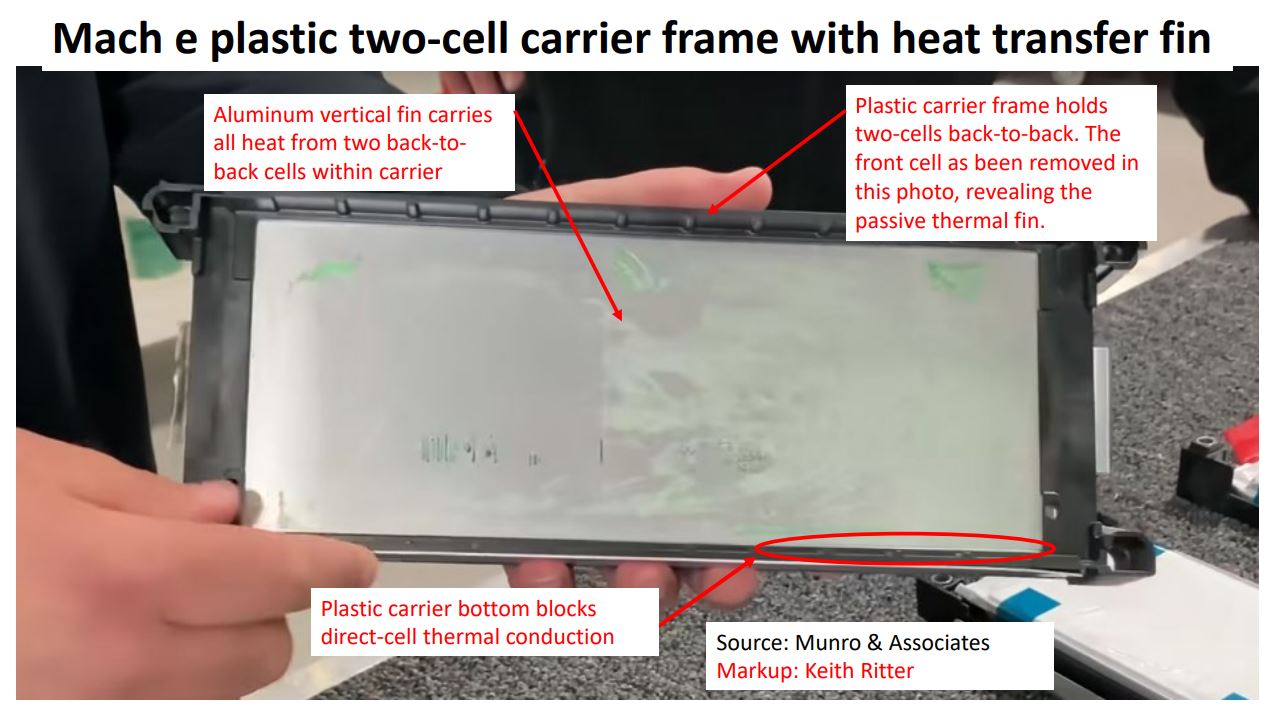 I reverse-engineered the cell-to-plate construction and cell heat generation, then calculated the Mach-E’s “thermal bottleneck score.” 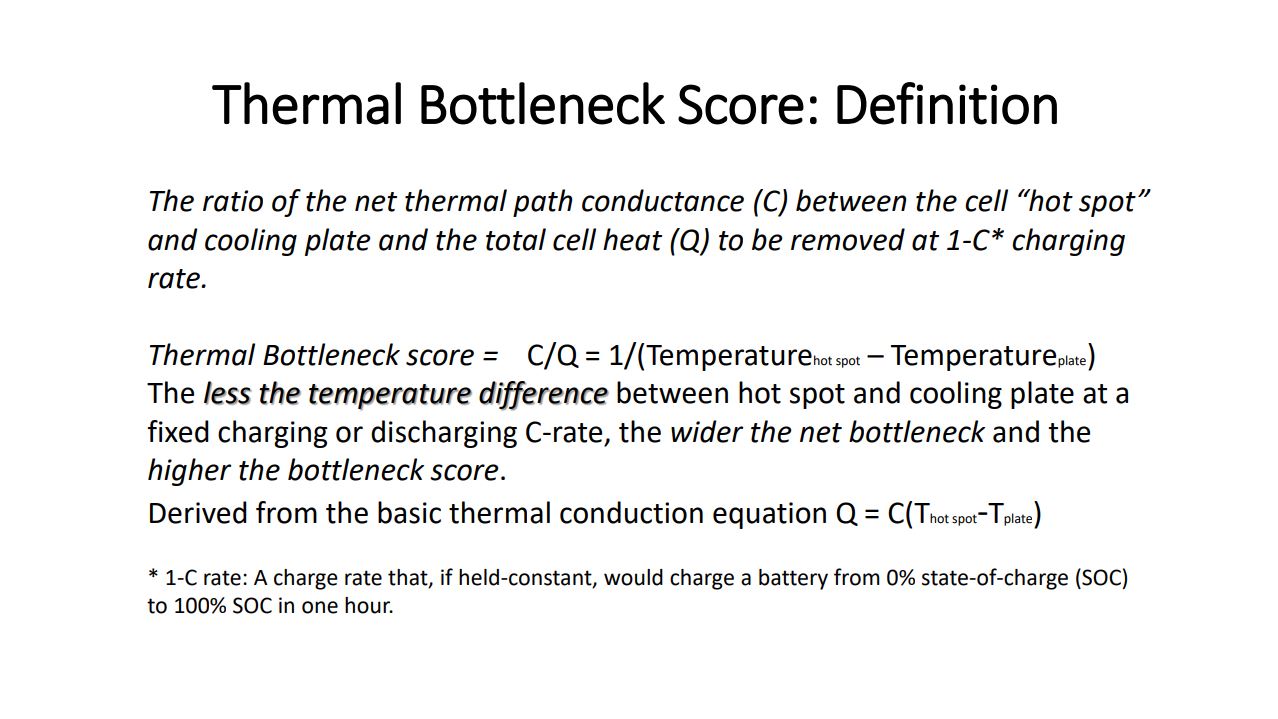 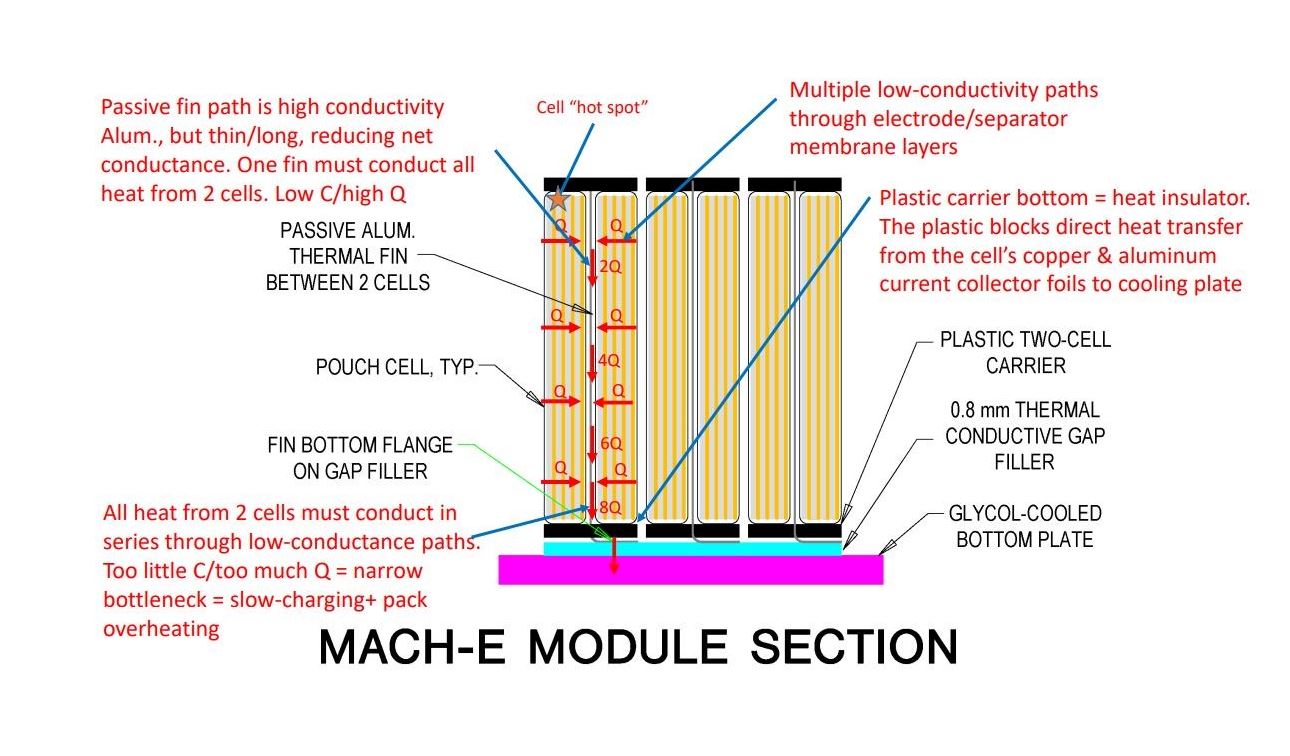 LG designed both The Mach-E’s and Chevy Bolt’s packs and used the same conceptual architecture. The Munro video shows just how conceptually similar both the Mach-E’s and Chevy Bolt’s module construction is, right down to the cell geometry, two-cell plastic carriers, and shared passive thermal fins. The Bolt’s thermal bottleneck characteristics therefore closely match the Mach-Ee and have a similar thermal bottleneck score. 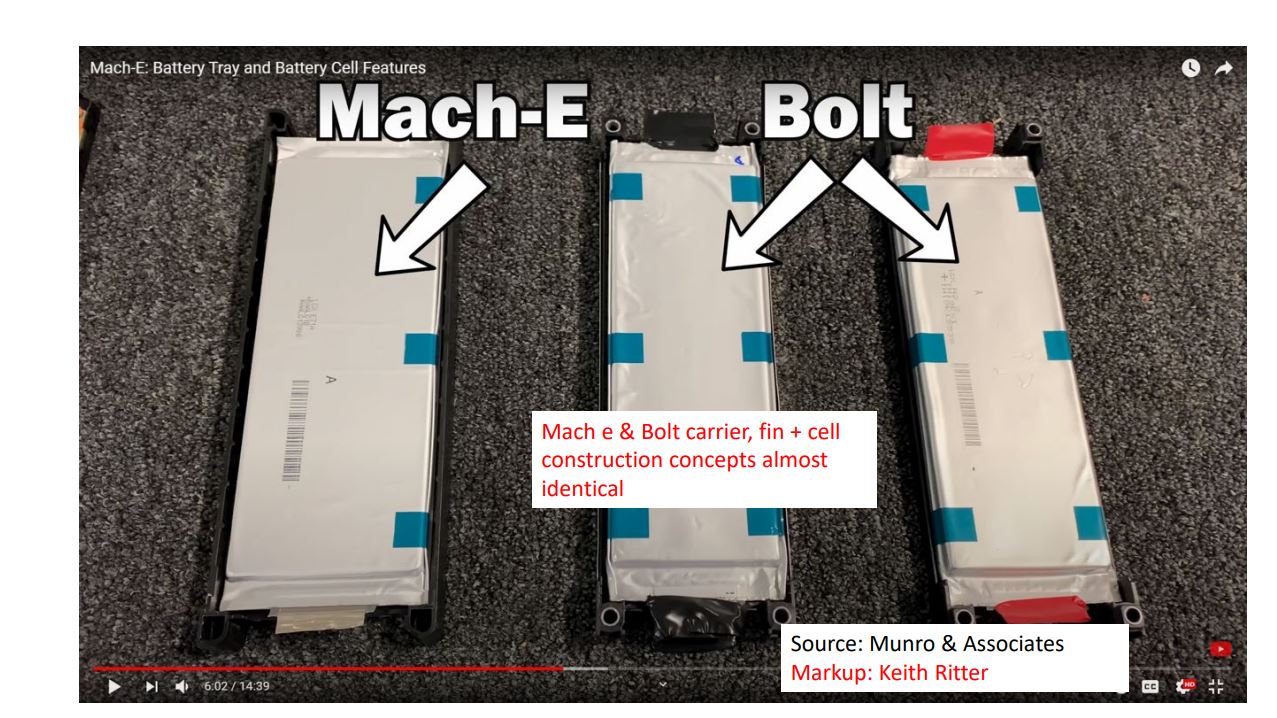 As the Mach-E module section detail above illustrates, the Mach-E’s module architecture apparently contains a significant thermal design weakness – the plastic carrier bottoms. They block direct cell-to-plate heat conduction – the primary thermal path used in most other manufacturers’ current-generation pouch-cell-based packs. The only thermal path is through a long, thin passive aluminum thermal fin. With two cells heating it, this is too much heat for the skinny fin to efficiently conduct down to the cooling plate. It is literally a narrow thermal bottleneck.

The Mach-E’s conductive-path thermal resistance model showed that at a 1-C rate charging/discharging current, it scored a next-to-last 0.23 bottleneck score and had a 4⁰C temperature difference between the cell hot spot and cell cold-spot near the cooling plate.

This temperature difference is extremely stressful to the cell and can contribute to reduced cell energy storage capacity. This charge rate or higher can only be sustained while the cell internally “warms itself up” to its maximum charging temperature early in the charge session. Once at maximum, the cooling system engages to keep the cell hot spot below the cell’s maximum temperature. 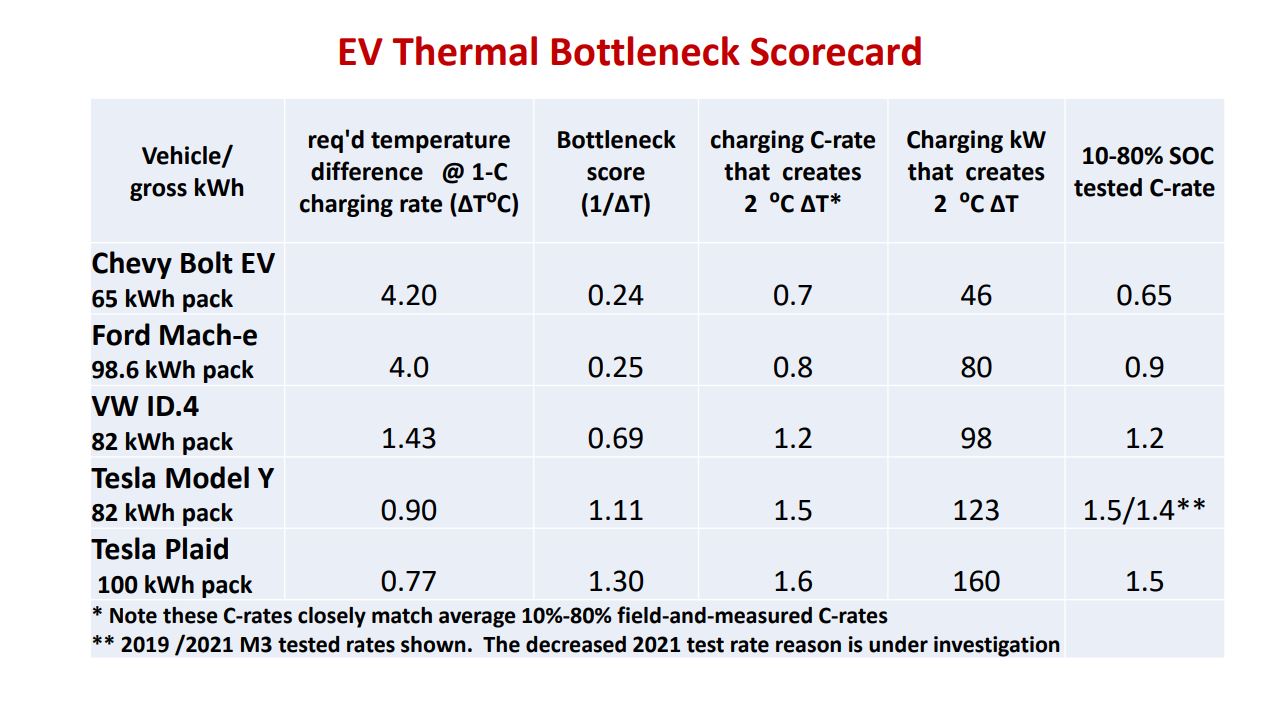 The Mach-E pack’s thermal bottleneck also explains its overheating problem when driven “unbridled.” Track-style performance driving involves repeated hard acceleration and heavy braking, including regenerative braking. If those driving cycles repeatedly push or pull over 100 kW into or out of the pack (and with the GT’s 480 HP of motor power and a lead foot, that is easy to do), the cell internal resistance heat will exceed the conductive heat path’s ability to remove it. Cells will quickly heat up beyond their high-temperature limits & the pack will go into reduced propulsion mode.

The VW ID.4, which uses VW’s MEB-platform battery, is frequently cross-shopped with the Mach-E and therefore worthy of comparison. The typical VW MEB-platform battery uses pouch cells in “shoebox” style aluminum module cases. The cells sit on the case bottom, which then sits on an aluminum glycol-cooling plate. Thin conductive gap-filling materials at the interfaces eliminate air gaps and improve thermal conduction. This is a simple and cost-effective thermal cooling design concept and installed in many current-generation EVs by numerous manufacturers. 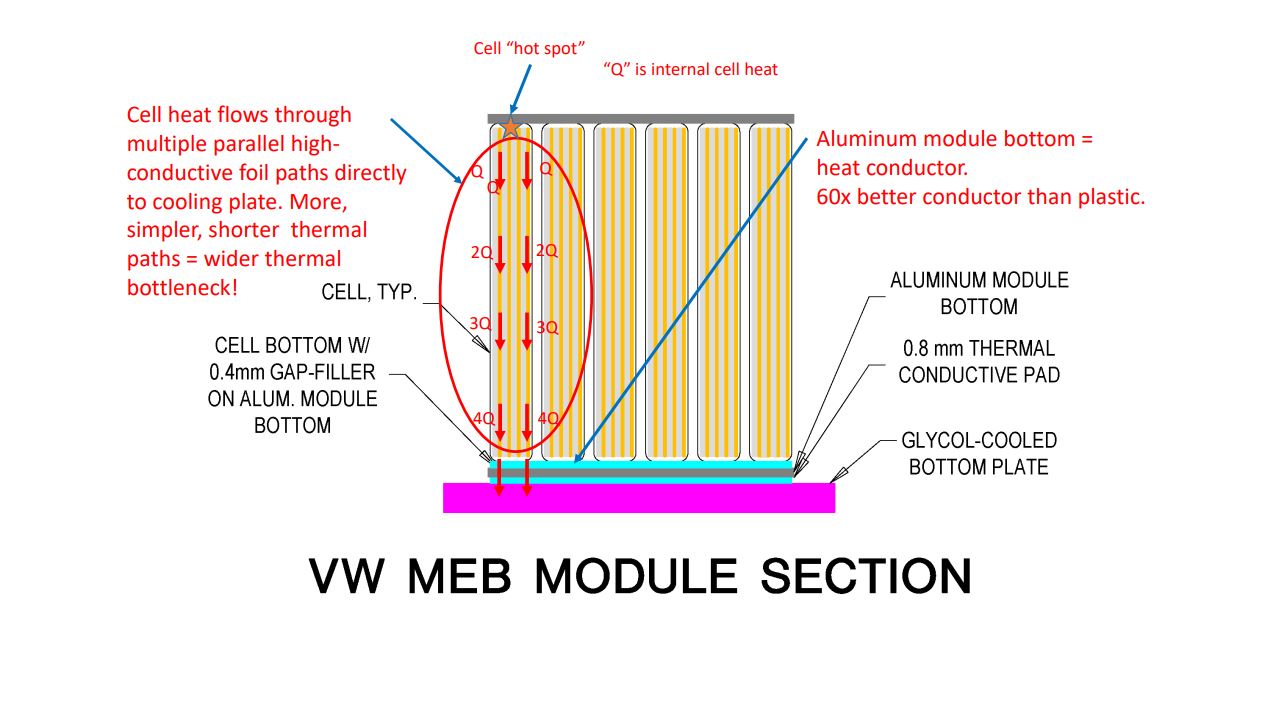 The ID.4’s thermal path from the cell hot-spot to the cooling plate is both significantly shorter and more conductive than the Mach-E’s, giving the ID.4 and other MEB-based vehicles a wider bottleneck and much higher bottleneck score. This is proven out with the MEB pack’s significantly higher tested average 10%-80% C-rate fast charging speed than either the Bolt or Mach-E.

The Model Y is another popular Mach-E competitor. With the recently released “refreshed” Model S and X, now both the S/X and Model 3/Y battery modules share similar thermal paths, using side-snake cooling plates direct-glued to the cell cans. Ample photos and articles are available on the 2170-cell module construction. We based our refreshed S/X pack assumptions on an article/video on a recently-opened Plaid pack.

The cell-to-snake plate thermal bottlenecks for both Tesla variations are so wide that they become a “non-bottleneck”. Other charging capacity bottleneck factors, such as AC cooling system capacity and cell chemistry become the critical thermal bottlenecks. The smaller-diameter-18650 cell module’s 1.6 score was slightly higher than the 2170-cell Y’s 1.5 score thanks to its slightly shorter and more effective conductive path. 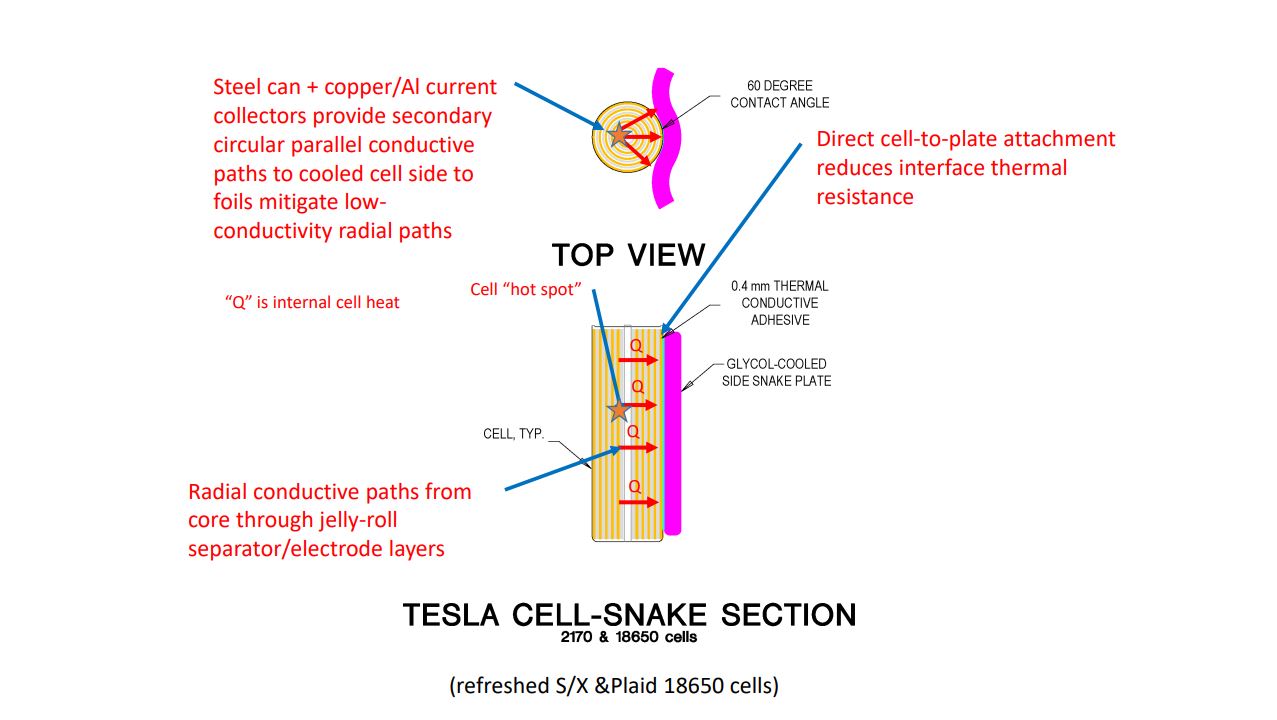 To its credit, Ford is exploring the various slow-charging/over-heating issues and seeking improvements. It's promised a software update that will extend the higher-speed charging rates beyond 80% SOC, and possibly bump up the maximum initial kW charge rate.

What about the amazing Porsche Taycan, Audi e-tron GT, and Hyundai Ioniq 5 fast-charging speeds? I don’t have a solid explanation on this charging magic yet. Their thermal path “conductance” values aren’t sufficiently higher than the EVs modeled in this article to justify the speeds. They must have lower cell-heat-generation rates than the others at these high C-rates. Research continues. I suspect a low-resistance cell chemistry or cell-construction recipe, perhaps shared and linked to something else they share in common. Could it be…Rimac?

Footnote: When adjusting the thermal bottleneck modeling spreadsheet to estimate charging C-rates required to create on a fixed hot-spot-to-cooling-plate temperature difference, the C-rates in most cases closely matched the 10%-80% SOC average C-rates reported in many of Mark Kane’s fast-charging analysis articles.

Many EV’s start out for the first couple of minutes with extremely high kW charging rates to quickly warm up the cells to the maximum charging temperature, but then thermal reality sets in. By 80% SOC charging or after 15 minutes of performance driving, a pack’s true power and thermal management capabilities are revealed.