The agreements mirror the recent one with LG Chem's LG Energy Solution.

Stellantis and Samsung SDI officially announced a memorandum of understanding to form a joint venture to produce battery cells and modules for North America - an agreement that was rumored a few days ago, right after a similar deal with LG Chem's LG Energy Solution.

It means that Stellantis has two battery joint ventures in the piepline in North America. The one with Samsung SDI will have an initial annual production capacity of 23 GWh, with the ability to increase up to 40 GWh in the future. Production should start in 2025, but the location has not yet been selected.

The battery plants with LGES and Samsung SDI will supply plug-ins produced at Stellantis' plants in the U.S., Canada and Mexico.

For reference, a total of 63 GWh (80 GWh optional) would be enough to produce from 500,000 to 800,000 all-electric cars with 100 kWh battery packs, which is quite a substantial scale. In the case of Stellantis, a lot of batteries might be used also in plug-in hybrids, so the number of vehicles would have to be higher then.

"The battery plants will fulfill the needs of Stellantis assembly plants throughout the US, Canada, and Mexico for installation in next-generation electric vehicles ranging from plug-in hybrids to full battery electric vehicles that will be sold under the Stellantis family of brands."

"Stellantis is now well advanced in the process of securing annual production capacity for electric vehicle batteries, paving the way to achieving 40% of its sales in the U.S. comprised of electrified vehicles by 2030."

"Stellantis plans to invest more than €30 billion through 2025 in electrification and software development, while targeting to continue to be 30 percent more efficient than the industry with respect to total Capex and R&D spend versus revenues."

“With the forthcoming battery plants coming online, we will be well positioned to compete and ultimately win in the North American electric vehicle market. Our strategy to work with highly recognized partners boosts the speed and agility needed to design and build safe, affordable and sustainable vehicles that match exactly what our customers demand. I am thankful to all the teams working on this critical investment in our collective future.”

“It is an honor for us to build a battery joint venture with Stellantis who is accelerating its electrification strategy in this green energy era. With this battery joint venture, we will do our best to meet the high standards of our customers in the North American EV market leveraging Samsung SDI’s battery technology, high quality products and safety measures.”

The general plan is to use also batteries from external suppliers (data from the Stellantis EV Day 2021): 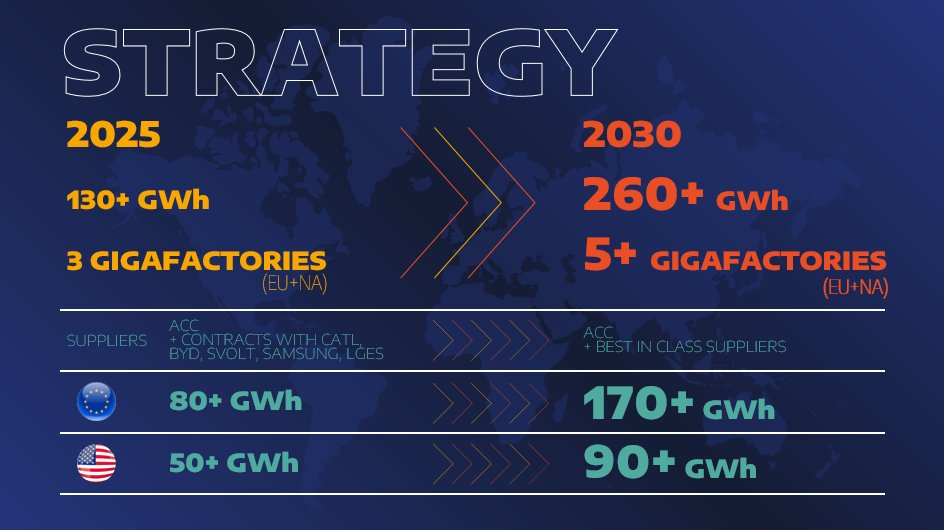